The 100 Grand Bar’s primary ingredient is milk chocolate, which is popular in the American candy market. This candy bar has been the center of many gags and jokes, such as people saying they will give away 100 Grand, with people thinking it is cash, only for it to be the 100 Grand candy bar. This has spawned a bit of consternation, but nonetheless, the 100 Grand Bar remains a popular product and has competed well with other candy bars in its range, such as the Crunch Bar. You can read more information about the 100 Grand Bar below, such as its history, flavors, and where to buy it.

This candy bar was once called the $100,000 Bar and was verbally referred to as the “Hundred Thousand Dollar Bar” before it was renamed in the mid-1980s. In South Africa, the bar was called “1,000,000”, perhaps due to currency value differences and perceptions of that value. The 100 Grand Bar is thick, rough with crisped rice embedded into the outer layer of chocolate, and contains caramel in the center of the candy bar’s length.

Initially, 100 Grand was produced by Nestlé, the one who trademarked it. However, Nestle ended up selling off many of its candy products to the company Ferrero SpA. Ferrero bought the 100 Grand Bar as well as many other candy products from Nestle in 2018 for about 2.8 Billion Dollars. The sale allowed for Ferrero to use the Nestle name on the acquired products for a limited time, about a year, but then it seems that the Nestle name will be removed from products such as the 100 Grand Bar and other products from the deal.

Redesigns for the 100 Grand Bar packaging are nothing new, however, as the packaging has changed significantly since the candy bar’s introduction. Originally The 100 Grand Bar was called “$100,000” and had the tagline “A Fortune In Flavor!” on it; The package had white, red, and brown bands of color and the words Nestles Caramel Crisp written above $100,000.

Later editions of the package design for the candy were mostly red and had a picture of a young boy on it as a mascot for the brand. Eventually, the boy was no longer used on the package, and over time the packaging for the 100 Grand developed further, with the name being changed and it adopting the now-familiar red, white, orange and brown color scheme.

The name “100 Grand” is set up rather nicely for pranks, though some people can get upset about them. A Radio Station was sued when a Kentucky woman who thought she won $100,000 in a radio station giveaway found out that her prize was really a Nestle’s 100 Grand candy bar. The woman was under the impression it was 100 Grand in currency, and after winning she found out that it was the candy bar instead. TV shows such as “The Office” have used the 100 Grand bar for jokes as well, playing on the name.

The Company That Makes 100 Grand Candy

The company that makes the 100 Grand candy bar is Ferrero SpA, an Italian manufacturer of branded chocolate and confectionery products. Ferrero bought the rights to “100 Grand” in a deal that saw many candy products being transferred to Ferrero from Nestle in the year 2018. The deal was for around 2.8 Billion dollars, with Ferrero being allowed to use the Nestle name on the candies they acquired for 1 year.

The Year 100 Grand Was Invented

The Company That Invented 100 Grand Candy

The company that first invented and produced 100 Grand candy is Nestle, a Swiss multinational food and drink company. At the time they called it $100,000 before changing its name to 100 Grand.

Info On Buying The 100 Grand Bar

Stores That Sell The 100 Grand Bar

Here are some stores that may sell the 100 Grand Bar 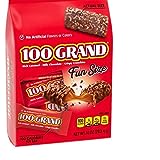 You can also buy 100 Grand at Old Time Candy by clicking the image below.

The Types And Flavors Of The 100 Grand Bar

Here are some of the different types and flavors of 100 Grand Bar.

The 100 Grand Bar, previously the 100,000 Grand Bar, covers a wide range in terms of advertising. With no clear target audience, the commercials feature a variety of 100 Grand Bar consumers. During the 1960s-1970s, the brand focused on print advertising as well. Many poster images and magazine advertisements were on display during this time. 100 Grand Bar used slogans such as, “It tastes so good its almost illegal,” and “A Fortune in Flavor.” The 100 Grand Bar is not active on social media, with no official accounts available.

Here are the ingredients of 100 Grand Bar.

This information is for a 1.5 oz serving of 100 Grand Bar – Check the label of the product to be sure of the accuracy

Here are some TV commercials of the 100 Grand Bar