Chinese snacks fundamentally shape the rich culinary heritage of East Asian civilization. If you enjoy Chinese food, you may already be aware that there are many options for people who prefer to eat on the go. You must have heard about those unique treats, even if you’re unfamiliar with Chinese food.

Finding the ideal snack is undoubtedly tricky. Therefore, we will present you with some of the most famous sweet, salty, and savory Chinese snacks that you definitely need to try if you want to truly explore China.

Manjū is a type of Chinese snack delicacy that is steamed and has varied shapes as well as distinct tastes and ingredients. Manju typically consists of two primary components: the creamy paste concealed under the chewy outer layer and the outer shell made from kneaded flour. Generally, wheat, rice flour, or a mixture is used.
The most popular kind, known as Anko or Tsubuan has red bean paste inside and is typically made with wheat flour. Manjū originated most likely in China but is now typically connected to Japan. According to the legend behind this popular dessert, it was originally a Chinese invention with a pork filling that was subsequently changed by Japanese monks who were vegetarians. In their new version, the snack had a red bean paste, which made it somewhat sweet.

Shaobing is a layered flatbread that is popular as a snack in the northern part of China. Those Chinese snacks are typically sprinkled with sesame seeds. The Shaobing looks like a flattened bread roll and is constructed with several layers of dough that have been coated with sesame paste. Despite having its roots in the Shandong region, Shaobing is now sold at countless street vendors across the nation.

In reality, there are several ways to enjoy Shaobing, depending on the location. It is a common breakfast option in southern China, eaten with soy milk or tea and frequently filled with sweet ingredients like sesame, jujube, red beans, and red date paste.
According to Chinese tradition, the flat, roasted shaobing snack was once known as “hubing”, which translates as a barbarian pastry. It is thought that the “hubing” is the ancestor of the shaobing.

READ MORE:  American Snacks That Everybody Loves And Adores

Gem biscuits are little, vibrant cookies also known as Biskut Ais Jem. They also go by the name “button biscuits.” Gem biscuits are popular Chinese snacks in many Asian countries, including Malaysia, Singapore, Indonesia, and the Philippines. However, an interesting fact is that those delicious treats originated in Britain.

Gem biscuits are little cookies that are covered in a swirl of sweet frosting. And it is clear why they are so well-liked and loved by people of different nations. 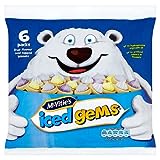 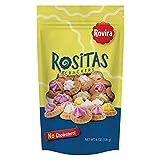 Tanghulus are typical northern Chinese snacks that consist of numerous rock sugar-coated Chinese hawthorn fruits on a bamboo stick. Its calabash-like form inspired its name. Even though tanghulu is covered in a solidified sugar syrup, it is frequently mistaken for conventional candied fruits. Northern China continues to enjoy widespread popularity for this sour and sweet dessert that has been produced since the Song Dynasty.
The typical fruit for skewering is the Chinese hawthorn. However, in more recent years, producers have also utilized other fruits such as cherry tomatoes, blueberries, strawberries, mandarin oranges, pineapples, bananas, kiwifruit, or grapes. Typically, the seeds are removed from the Haworth pits and then filled with the red bean paste. Then the snack is skewered and dipped.

Chinese snacks known as zongzi are made of glutinous rice that has been packed with different spices and ingredients. It is like a rice dumpling. Typically, zongzi is wrapped in reed, lotus, bamboo, or other similar broad flat leaves, then steamed or boiled. Every kind of leaf gives the rice a different flavor, and therefore, each of them tastes differently and is unique.

Both savory and sweet components such as peanuts, yam, hard-boiled eggs, red bean paste, mushrooms, chicken, pork, and vegetables are frequently used as fillings. Most Zongzi are consumed during the Dragonboat Festival, also known as the Duanwu Festival.

Zongzi originated in China back in 771- 476 BC. It was initially utilized in rituals that were held to worship gods and ancestors. Rice dumplings have been associated with the Dragon Boat Festival too.

The rice noodle roll is a popular Cantonese meal that originated in southern China, including Hong Kong. It is a little roll made with rice and milk, it is stripped and typically filled with veggies, beef, pork, or shrimp. The rice noodle roll can also be cooked without any toppings.

Rice noodle rolls are frequently served as a snack or as a variation of the well-liked dim sum, and before serving, sweet soy sauce is frequently drizzled on top. Regional variations are also found because it is a common Chinese snack. For example, in Cantonese cuisine, the snack is prepared as dim sum.
Additionally, similar snacks are primarily consumed for breakfast in Vietnamese cuisine. Typically, they are served in both dry and wet forms in Southeast Asia, along with a sweet black sauce known as timzheong.

China’s Shaanxi province is where the noodle dish is known as “Liangpi” first appeared. In order to make the meal, thinly sliced bean sprouts, cucumber, and cilantro strips are typically garnished with peanut sauce, chili oil, and vinegar. The noodles used in the dish can be made from wheat flour, rice flour, or a mix of the two.

The name of this snack translates to “cold skin,” which refers to the thick, chewy, and transparent texture and look of the noodles. According to the saying, the snack was created during the Qing Dynasty. In different regions of China, there are different variations. For example, the Liangpi that is made in Hanzhong City generally includes garlic and chili oil.
Maijang liangpi consists of black sesame paste that is used in the sauce. The Xin Gana Liangpi has wheat gluten, bean sprouts, and mashed garlic on top. And the sauce for this particular one is made from salt, vinegar, and chili oil.

One of the most famous Chinese snacks is egg rolls. The rolls consist of chopped vegetables and diced meat that are wrapped in dough that is made from eggs. The snack is then deep fried in oil. Even though some people state that this appetizer was invented in New York in the 1930s, others strongly believe that the egg rolls were intended in Southern China and have their roots in Cantonese cuisine.
Today, egg rolls are among the most widely consumed Chinese snacks and are often consumed during breakfast. Typically, this dish is served hot and comes with a spicy dipping sauce. Several different versions of this appetizer are found in countries such as India, Vietnam, Australia, and the United Kingdom.

Chinese steamed buns called mantou are often made plain, with no filling in them. Although it is often eaten alone, it is occasionally offered as a side dish. Mantou is a staple cuisine in the northern region of China and has a rounded, flattened form.
The crumbs are often quite dense, the buns have little flavor, and there is no crust. They are made with yeast, which serves as a leavening agent, and wheat flour. Mantou is as sacred to Chinese culture as bread is to Westerners. According to a well-known urban legend, Mantou literally translates as “a barbarian’s head.”

Traditional Chinese snacks known as spring rolls are made from flattened dough that has the filling of various vegetables and is typically deep fried in oil. For the filling, some of the most popular components are mushrooms, shredded pork, cabbage, and shrimp.

These tasty Chinese snacks are frequently offered as an appetizer along with a variety of dips and are often consumed alongside tea or coffee. Originally known as spring dishes, spring rolls were typically made to celebrate the spring arrival and symbolize it. Traditionally, a spring meal was brought as a gift and a blessing to friends or family members, and they were almost always entirely composed of fruits and vegetables.

Youtiao is one of the most widely consumed breakfast snacks in China. They are specially made breadsticks fried in oil. The sticks are fried in pairs and then joined in the middle. Youtiao is a fluffy snack that is soft on the inside and crispy on the outside. This snack has a pretty long history and actually goes back to the Song Dynasty when the ruler Qin Gui killed a popular commander called Yue Fei while under the sway of his wife.

In order to protest this action, the cook made breadsticks stuck together and shaped them so that they resembled two humans. Symbolizing the leader and his wife, the snake’s name literally translates as “deep-fried ghosts.”

Have you ever tasted any of those Chinese snacks? Which one would you love to try? Share your thoughts and experiences in the comments section below.