German snacks are truly worthy of recognition. Child or adult, everyone can enjoy the various options of delicious and mouth-watering treats. The German snack list is very long and consists of treats that are both sweet and salty, as well as countless chip and chocolate combinations. And guess what? You’re missing out if you haven’t tried them yet.

The sweet paprika flavor of chips is unquestionably the most well-known snack in Germany. In German, paprika is a sweet bell pepper. Sunflower oil is generally used to prepare these crunchy, crisp chips.

Furthermore, these chips are one of the mainstream German snacks when talking about them. It is impossible not to mention this mouthwatering treat. They are so amazing and delicious that you might never think of them. In fact, travelers who sample this flavor overseas often bring a box home with them.

This delicious snack’s flavor somewhat tastes like a cross between typical American BBQ and sweet bell peppers. The flavor of paprika is rather subdued. Even if you can’t handle spicy snacks, you may still consume these addictive chips. 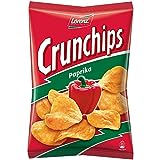 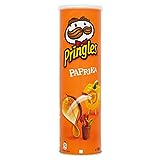 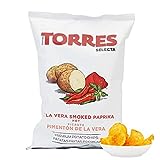 Every big celebration in Germany, such as New Year, Christmas, and Oktoberfest, is impossible to imagine without the iconic German snack- pretzel. There are two types: soft, moist pretzels that should be consumed right away, and hard, crusty pretzels that may survive for a very long time.

This pastry’s basic flavoring is merely salt, although, in modern times, individuals frequently add ingredients such as nuts, cheese, and butter. These baked treats are often eaten with German beer, cheese dips, and sausages. And you know what? Making those pretzels at home is much easier than you can imagine. 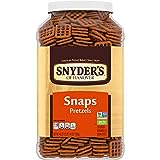 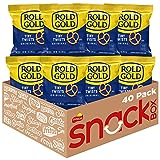 Another popular item on our list of German snacks is Zwiebelkuchen. It’s a famous cake in Germany, even though it resembles a pie more than a cake. Caramelized onions, smoky bacon, eggs, and a sour cream mixture are all components of this savory onion cake. Caraway seeds can be added to the cake to give it an earthy taste.

Although this delicious German treat is typically cooked in a round-deep pan, you are welcome to change its size and form to suit your preferences. The Germans frequently appreciate this combination as a way to commemorate the fall. This specific German snack is often eaten with a glass of wine.

Calling all potato lovers! Now we’re about to discuss one of the most special items from these German snacks and a traditional German snack: Kartoffelpuffer. Chances are that once you taste it, it will eventually blow your mind. You can get these golden-colored potato “pancakes” practically anyplace in this nation, from little street markets to sophisticated dining facilities. But if you think that it’s more of a German sweet than a snack, you’re mistaken!

These affordable savory pancakes are convenient to eat on the go because they are easy to carry around and consume. The treat is one of the most popular snacks in Germany and every visitor must try it.

The potato pancake pairs nicely with stews, sausages, and other meat-based foods. The most popular toppings for the kartofellpuffer are sour cream, apple sauce, and fruit jams.

Lebkuchen is amazing German gingerbread, found in the Nuremberg area. Lebkuchen has existed since the thirteenth century, yet it continues to be a favorite dessert snack today. One of the most popular German snacks, lebkuchen, is enjoyed on practically all traditional holidays and special occasions, especially Christmas.

Additionally, this unique gingerbread, which can be embellished with a variety of coatings and different ingredients, is offered in whatever size you can think of. Lebkuchen can be hung as a decoration in your house or given as a present to loved ones if you’d like.

This fantastic German snack is packed with fragrant spices, almonds, and candied fruit. There are many different tastes and textures available. Depending on the situation, it might be soft or firm, sweet or spicy. This treat comes in many forms, although the most typical shape is round. In addition to the traditional round form, you may choose a heart-shaped design with inscriptions on the icing to make it more merry and festive.

German cuisine has traditionally been inseparably linked with currywurst. More than 800 million currywursts are consumed in Germany every year- annually. You can see how tasty this food is just from that number.

There are only two basic ingredients in this traditional German dish: sausages and curry sauce. The heart of this meal is the silky, opulent curry sauce, which is made of tomatoes. It includes cinnamon, curry powder, sweet paprika, as well as tomato paste.

The sauce is typically combined with grilled or pan-fried sausages to make the snack. Sausages are mostly softly poached at first. While any variety of German sausage does fine, bratwurst is the most frequently suggested.

One of the most famous and loved German snacks is Quarkbällchen, a German quark ball. They are golden, deep-fried cheese balls. These mouthwatering snacks are made from one of the most widely consumed cheeses and are often consumed at family gatherings.

Quarkbällchen resembles sweet doughnut holes in both appearance and flavor. They are made by shaping dough balls from quark, flour, eggs, and sugar. After mixing the ingredients, they are deep-fried till golden brown. Finally, cinnamon sugar is often sprinkled on top of these light, fluffy doughnuts.

Quarkbällchen is frequently consumed in Germany around Christmas, Easter, New Year’s Eve, Oktoberfest, and during Fasching (the country’s carnival season).

Studentenfutter is one of the most loved German snacks and has been eaten since the 17th century. This treat is a combination of various nuts and raisins. Typically, the stuf consists of almonds, raisins, and nuts. However, in the modified version, dried fruits and unsalted nuts were added. Typically, the snack has walnuts, cashew kernels, hazel nuts, and brazil nuts in it.

Since the 17th century, it has been widely believed among students that, in particular, almonds were a potent deterrent to intoxication or a hangover. Another explanation is that the term was inspired by the supposed improvement in study performance.

“Studentenfutter” was even given as a medication in the period of the 18th century. It was believed that this mix of nuts and raisins cured a variety of illnesses by increasing the body’s natural power and strength. Similar to this, the snack has an addition of various spices in some cases too, mainly licorice and candied spice seeds. 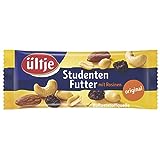 Given that it is regularly served at German funerals, Butterkuchen is one of the most famous German snacks that is also referred to as “funeral cake”. In addition to those significant events, Germans love to eat this cake on any occasion.

To make a butterkuchen, a yeasted dough mixture with the addition of sugar, flour, butter, and milk is used. Typically, the dough is rolled out, then the dents are made in it, which is worked with the butter. This guarantees that the buttery taste is dispersed equally.

The topping of chopped nuts and almonds complements the buttery cake well. Once you try this particular snack, you will eventually realize why German people adore it.

Erdnussflips, also known as peanut flips, are well-liked snacks in Germany. Despite their name, Erdnussflips are primarily made of cornmeal. In all, each peanut flip contains around a fourth of a peanut.

The texture of this treatment is very airy and crunchy. The “raw flips” are a combination of coconut, sunflower, palm oils, spices, crushed peanuts, and salt. These light brown, peanut-flavored corn snacks come in the shape of little pellets.

Cornmeal is heated by being extruded under high pressure to create flips. The flip shape is then produced by pressing the material, which forms an unending strand that is then cut by a revolving knife. That is how the erdnussflips are made.

We already know that German people love potatoes. Therefore, one of the most famous German snacks that need to be recognized is the Pickert. A pickert is a flattened, fried, or baked potato from the region of Westphalia, Germany.

It might be compared to a pancake or a sort of flattened dumpling. Normal Pickert comes in a rectangular shape and is referred to as Kastenpickert. However, the round version is called Pfannenpickert and is larger in size. The name comes from the Low German words picken and pecken, which mean to stick something on some surface.

Grated potatoes, eggs, milk, flour, and raisins (typically) are the most commonly used ingredients to make Pickert, along with some yeast, salt, sugar, and oil for baking. Three large potatoes provide about 10-15 pickets the size of your hand.

Picketers are a staple of the Lippe neighborhood, where they originated as a traditional dish for low-income families. Pickert was often consumed by impoverished farmers since it was an inexpensive and nourishing dish that would be needed for a day of work in the fields. These days, they are covered with butter, sugar beet syrup, lebewurst, and plum jam.

Whichever of these German delicacies you choose, sweet or savory, it will undoubtedly make you happy. There are countless delicious foods from Germany, including cookies, pretzels, cakes, chips, sausages, and many more. Some of these snacks are so popular that they are sold in practically every store in the world.

In addition to being delicious, these treats are a true representation of German cuisine. So, if you’re curious and want to learn more about the most breathtaking delicacies in this lovely country, you can get most of the German snacks in the large supermarkets near you.

Have you tasted any of those German snacks mentioned above? If not, which one would you love to try? Share your thoughts and experiences in the comments section below.