Russian candy is an integral part of Russian cuisine. However, foreigners frequently associate Russian cuisine with substantial, healthful dishes made with root vegetables to combat the winter chill. This is partially true, but to state that the Russians only ate beetroot soup, boiled cabbage, rye bread, and cottage cheese is simply not true. Many people are surprised to learn that Russians have just as strong a sweet craving as Americans, if not stronger.

The only reason Russians haven’t experienced the same obesity epidemic as their Western counterparts is that their sugar addiction manifests itself in small sweets and fruit-based treats rather than big doughnuts and marshmallows. With the memories of Soviet scarcity still fresh in their minds, Russians are wary of overindulging in sweets, which are always accompanied by a cup of strong, black tea.

Believe it or not, Russia creates the majority of the world’s best candies, chocolates, pastries, and delights! Even when it was the Soviet Union, people in Russia enjoyed a variety of sweets wherever and whenever they could find them. Since joining the Commonwealth of Independent States, Russian people have discovered an even greater variety of international candy brands all around the country.

Russian candy is one of the best things you’ll find, whether you’re a self-proclaimed chocoholic, prefer coffee-flavored candies, or enjoy sucking on fruit-flavored drops. Take, for example, the well-known Russian candy-like Zefir. Whipped fruit puree (typically berries) is blended with eggs and sugar to make this soft dessert.

Whether you’re from Russia or have just visited the country, chances are you’ve sampled some of these delicacies. But if you haven’t tasted Russian treats and just want to find out more about the Russian candy industry, keep on reading because below we’ll share the most popular and delicious Russian candy of all time that is still available in stores everywhere around the country. 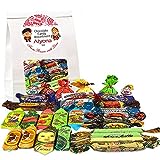 When somebody mentions the phrase “Russian candy”, most of the time, the first thing that comes to Russian candy lovers’ minds is Mishka Kosolapy. Therefore, if you want to buy Russian candy, go straight for Mishka Kosolapy, which translates to “clumsy bear” in English, because they’ve been the most popular since the Soviet era. The candy consists of two wafers with a praline mixture of roasted shredded almonds and vanilla flavoring. In addition, this Russian candy is wrapped in dark chocolate, which is indeed its main attraction.

The candy was especially popular because of its colorful package that featured bears on the trees. Some Soviet families even decorated their Christmas trees with these candies. Surprisingly, the candy is still in production and a lot of post-soviet countries consider Mishka Kosolapy one of their favorite Christmas candies.

Kara-Kum is an integral part of the Russian candy industry and, in general, of Soviet culture. Even if you didn’t know that there was a tasty candy called Kara-Kum somewhere, chances are high that you’ve still heard this name. The reason is that Kara-Kum is the name of a Turkish dessert, and it means “black sand.”

READ MORE:  Australian Candy - Favourite Sweets From Down Under

Kara-Kum candies are black in color and have a chocolate glaze on top. The filling is made out of praline with cocoa added and crushed wafers for a “sandy” texture. Trying this Soviet candy once again will definitely bring nostalgic memories for those who lived during the Soviet era.

Have you ever heard anything about “Iris”? If you adore caramel as much as we do, then you probably should because it’s hard to find a better-quality caramel-like treat like Russian Iris. Actually, that’s the main ingredient of another popular Russian candy called Zolotoy Klyuchik, which translates as Golden Key.

Due to their inexpensive price, Zolotoy Klyuchik toffees were the most popular candy in the Soviet Union. There was one snag: not everyone was able to remove the entire package from the sticky toffee, and these sticky candies with a soft center, caramel, and condensed milk flavors can simply be added to your morning. However, if you don’t have a chance of ordering Zolotoy Klyuchik but want to try it, don’t worry because making Russian Iris, or as they often call it, “iriski” by yourself is nothing difficult!

Fans of fairy tales, as well as anyone with a sweet tooth, will recognize Krasnaya Shapochka which means Little Red Riding Hood. The candy is made up of many layers of thin, crispy wafers and is wrapped in a yellow wrapper portraying the girl from the fairy tale. A praline paste is sandwiched between the layers and is glazed with a wavy chocolate glaze.

Just like Mishka Kosolapy, Kara-Kum, and plenty of other popular Russian or Soviet treats, Krasnaya Shapochka is also produced by a company called “Red October.” If you’re aware of world history, you probably acknowledge this name as a Socialist revolution. However, instead of blood, chaos, and terror, Krasnaya Shapochka is associated with sweet and delicious childhood memories. 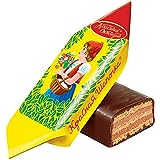 Even though Ptichye Moloko is a Russian candy made in 1967, it has nothing to do with the international candy from the 1960s. On the contrary, a single taste of Ptichye Moloko or “Bird’s Milk” is enough to feel Russian culture. Bird’s Milk is a popular Russian dessert that is available as a cake or a candy.

The first-ever dessert that the Soviet Union patented was a simple sliver of marshmallow melted on top of chocolate cake. With a few exceptions, agar-agar, a gelatin-like substance, is used as the major ingredient in the development of the well-known French dish. Furthermore, this delicate cake, composed of boiled seaweed and having the airy consistency of a light mousse, is the most popular dessert in Russian cuisine. 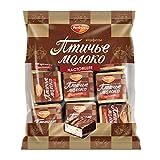 Tula Pryanik is a traditional Russian candy, which is especially popular in the winter. In the 9th century, the basic Pryanik, also known as “honey bread” or “spice bread“, arrived in Russia from Egypt in the 9th century. Baked rye flour, honey, and berry juice are used to make the popular dessert. During the holidays, one of the yummier Russian sweets is rye.

The main reason why this Russian dessert is called “Tula” is that the Russian city of Tula usually produces gingerbread. And Pryanik tastes almost like gingerbread, as it features several spices and herbs. A must-have candy for any traveler is the rectangular Tula Pryanik, but it’s also available in a variety of different shapes. In Tula, you can buy souvenir cakes shaped like animals, houses, hearts, and even weapons! The small round gingerbread, on the other hand, can be found in any Russian supermarket.

Kis-Kis is a sweet toffee with a firm square about 1.5 cm across and is the cheapest Russian candy. Toffees have a firm, candy-like feel on the outside, but the chewy interior layers are a pleasant surprise. That is why it is especially popular in Russian households.

Toffee has a wonderful texture that allows for chewing and sucking motions. The firmness softens and softens into chewy. This method is well-known for including sticky milk on the teeth. To put it another way, Kis-Kis is the simple result of a quick trip to the dentist.

Russians who grew up during the Soviet era will recall these candies as a time when sweets were scarce or as mass-produced pleasures. People who grew up in Russia, as well as those who had the opportunity to visit the country, will remember these chocolate candies fondly. It’s the ideal partner for a cup of hot tea.

If you’re fond of candies from the Soviet era, Vzletnaya Candies will definitely attract your attention too. It’s a famous Russian hard candy that is still very popular in modern countries. After the harder layers were melted, a wonderful lemony flavor broke forth from this hard candy. It was designed to aid airline passengers in preventing their ears from being obstructed during takeoff and landing. Furthermore, Vzletnaya candies have become an all-time favorite delicacy among schoolchildren.

If you wonder what this candy tastes like, then you should know that it’s pretty much like Jolly Ranchers, a colorful small candy from the 1940s. Vzletnaya Candies are exactly as sticky as Jolly Ranchers but a bit more tart. Surprisingly, this traditional Russian candy wasn’t available in shops, which is why it was considered a delicacy for USSR schoolchildren. Now, things have changed and Vzletnaya Candies are available in most Russian stores.

The close ties between Russia and the Orient can be tasted in its traditional delicacies. Halva is one of the most common Russian candy that can be found in practically every home. Sunflower seeds, pulverized with sugar, are used in place of sesame seeds in Middle Eastern cuisine. It’s a satisfying dessert thanks to its earthy flavor and dense density. It was one of the few cheap sweets in the Soviet Union.

They made it in enormous blocks that were chopped and sold by the kilo in shops. Despite the unappealing appearance of the gray cubes that resemble clay, halva is surprisingly tasty. Head to posh confectioners for halva that has been wrapped in chocolate or blended with pistachios for a more visually pleasing version.

Halva Rot is indeed the most popular halva brand not only in Russia but in most post-Soviet countries, such as Armenia, Georgia, or Latvia. It’s produced by the famous candy company Rot Front, and unlike traditional halva, it’s made from peanuts. 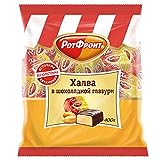 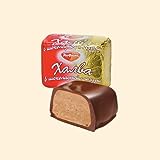 Korivka Krowka is a Russian candy that has grabbed the nation’s heart. Most Russian kitchens have stashes of this candy, with its soft, golden, fudgy wrapper and gushing sweetened-condensed milk center, tucked away in drawers.

The name Korivka Krowka translates as “little cows,” and indeed, you can see a picture of small cows on the package of this Russian candy. This candy contains milk whey, vanillin flavor, and scratch. It is ideal for anyone who enjoys chewy candy. 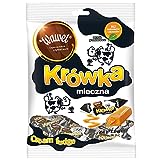 Pastila is frequently compared to Turkish delight because of its soft, chewy texture and exquisite aroma. However, you won’t find anything as unusual as rose essence or powdered sugar inside these delectable squares. The recipe is straightforward. The key ingredient is the humble apple. It’s pureed and honeyed, and it’s sometimes blended with egg whites.

Dehydrating the light, airy dough yields a delicate, slightly sticky sheet that is cut into squares and served with tea. Even the cheapest store-bought Pastila has benefits; the low amount of chemicals and lack of oil and fat makes it a nutritional sweetener. It is especially popular among mothers to give it to their children as a healthy alternative to sweets.

Russian candy Alenka is a delicacy made from cocoa beans. Some of the other ingredients, such as powdered sugar, cocoa butter, and milk powder, give it such a smooth texture that this Russian candy differs pretty much from traditional American chocolate.

Alenka Chocolate was named after Valentina Tereshkova, the first female cosmonaut, but the package depicts another girl. It is slightly lighter and smoother than traditional American chocolate. Today, this Soviet candy is especially in high demand during the winter holidays and Christmas season. There are plenty of different flavors of Alenka chocolates, and they come in both 100-gram bars and small chocolates. 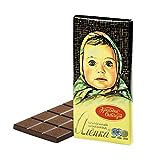 Since we have already taken you through our guide to Russian candy, you must now try any of these candies during your stay in Russia. Whether you have a sweet tooth or you’re just a casual tourist when it comes to getting your sugar fix, we hope you liked our reviews and recommendations! And if you think that any of your favorite Russian candy is missing, let us know in the comments below.