Jolly Ranchers are colorful small candies and are a type of hard candy. Jolly Rancher comes in a variety of different colors and flavors. They were first made in the year 1949, and since then new flavors and spin-off products for Jolly Rancher have been produced. This candy has enjoyed some popularity since its release, and the Jolly Rancher brand has continued to update its product years after it was first released.

Jolly Rancher, an American brand of sweet, somewhat tangy, or sour/sweet hard candy products, is currently owned by The Hershey Company. Jolly Ranchers come in various colors and flavors. Jolly Rancher was first introduced in the year 1949. They are hard, brittle, rigid, translucent, and the brand has many different flavors.

The product was originally produced by the Jolly Rancher Company that was founded by Bill Harmsen of Golden, CO. He originally also sold ice cream but realized it was hard to sell during the winter months, so he focused on hard candies that can be sold year-round. In 2002, Hershey closed the Wheat Ridge, Colorado, plant and moved the manufacturing of Jolly Rancher to Mexico to save costs.

Flavors of Jolly Rancher include cherry, blue raspberry, grape, green apple and watermelon. There are also sour, cinnamon, and smoothie varieties. In 2013, lemon was reintroduced in an all-lemon bag. In 2015, a Fruity Bash variety pack was offered and in 2017 a Hotties bag was introduced with fruit flavors that added cayenne pepper, sriracha, habanero and ginger.

A number of other Jolly Rancher products have been made, from gummies and fruit chews to jelly beans, lollipops, filled pops and gelatin desserts. Jolly Ranchers are manufactured by creating a solution of corn syrup, sucrose, glucose, or fructose syrup that is boiled and cooled to create a supersaturated mixture. As the mixture is cooled, natural and artificial flavoring and artificial colors are added to the syrup solution which is mixed with malic acid to improve shelf life and add further flavor. Once the mixture cools it is extruded into long malleable strings that are cut to size and individually wrapped and packaged.

Jolly Rancher gummies are a chewable candy spin-off to Jolly Ranchers and have been made available in the same fruit flavors as the hard candies. Jolly Ranchers can be mixed with other foods and added to drinks. You can crumble and sprinkle them onto cookies, cakes and other baked delights and top candy apples.

The Year Jolly Ranchers Was Invented

Jolly Ranchers were first made in the year 1949. Since then, the Jolly Rancher brand has created new flavors and spin-off products from the 40s candy.

The Jolly Rancher company was invented and created by Bill and Dorothy Harmsen. Their product was sold in the Denver, Colorado, area. They named the company “Jolly Rancher” because it sounded very friendly and would create a positive western company vibe for customers. The brand was first introduced as an ice cream store.

After Bill and Dorothy found out that the ice cream sales were reduced in the winter, they decided to add chocolate to their product assortment. As a result of this decision, a new line of bulk and boxed chocolates was added. Those sweet treats were produced on a small candy farm located in the Denver area.

Soon, the brand gained popularity and the love of people. So, the founders decided to open franchise stores in different states of the USA, such as Wyoming, Colorado, and Nebraska. They offered chocolate candies and hot cinnamon taffy sticks, and prices for those were as low as five cents.

Those sweet treats became loved by many people, and therefore, they caused the vast popularity of the Jolly Rancher Candy Brand. Slowly, the company started to manufacture and offer similar hard candies to their customers.

The Jolly Rancher trademark was registered on March 31st, 1958. The registration number of the word mark was 0695762. The trademark of the name was first used in the manufacturing and packaging process in 1960, and it was noted in the filing.

In 1966, because of some financial problems, the Jolly Rancher candy manufacturing company was sold to Beatrice Foods. However, even though the company was sold, Bill and Dorothy Harmsen continued to operate the business. Another acquisition was made by Leaf, Inc. in 1983. This time, Jolly Rancher was bought from Beatrice Foods along with several other brands and became part of Leaf, Inc.

The Company That Makes Jolly Ranchers

Jolly Rancher is currently manufactured by the Hershey Corporation. Hershey also owns products such as Take 5 and the Hershey bar.

Hershey’s is an American food producer and manufacturer famous for making chocolate and sweet confections. One of the most famous products of Hershey’s company is Milk Chocolate, which became the best-known American candy of the 20th century. The headquarters of the company are located in Derry Township, Pennsylvania.

The origin of the Hershey company goes back to the 1880s. It was first founded by Milton S. Hershey. At first, the company was known as the Lancaster Caramel Company.

Hershey decided to purchase Leaf, inc, brands of North American confectioneries and those, including Jolly Rancher. The acquisition happened in 1996. Other famous brands that were also bought by the Hershey corporation were Whoppers, Good & Plenty, PayDay, Milk Duds, and Heath Bar. Part of the agreement was that Hershey would sell the European candy operation to the Leaf’s parent company, Huhtamäki Oy.

The factory plant of Jolly Ranchers, which was located in Wheat Ridge, Colorado, was closed in 2002 and the manufacturing process was moved to Mexico. One of the main reasons for this decision was that manufacturing in Mexico was associated with lower costs, and the company was saving money by doing so.

The Hershey Company acquired The Allan Candy Co. in 2014, which was an Ontario-based company. After the acquisition, the manufacturing of candy was moved to Canada, to the Granby plant.

We all know and are familiar with the current Jolly Rancher logo. However, similarly to the brand itself, the logo changes too, time by time, and is represented in different shapes, colors, and characteristics. Modern logos are modified to show the customers and the world that the brand is keeping up with modern technologies and changes around them.

The very first logo that was introduced by Jolly Rancher was released in 1949. The letters were represented in black and white with a white background. There was a black circle surrounding the logo. The logo was in use until 1959. Then it was slightly modified.

The second logo was introduced in 1959, and this time, the design became much simpler and was represented by only letters with no background. All the letters were in upper case and were black. The logo remained until 1986.

Complete modifications and changes were made in 1986, and as a result, the new logo was absolutely nothing like the old ones. This time, the brand brought color and “life” to it. The new logo was still “block lettering” in white, and it had a bold blue background. The yellow outline was also introduced this time. In the background, pictures of fruits were shown. It included cherries, grapes, and sliced melon and watermelon.

Another logo modification was done in 1998. This time the word order was changed. In the previous versions, “Jolly Rancher” was written side by side. In this case, the “jolly” was written on top of the “rancher”. In this version, the inside of the letters was white. The background was blue, and the logo was surrounded by a yellow outline.

The current logo was created in 2012. If in the previous version, “Jolly Rancher” was in all capital letters, in this case, “Rancher” is represented in lower case letters. The whole name was used, and there is a blue color behind the letters, written in blocks and bolded. A yellow outline surrounds the logo. The current logo is a combination of the colors blue, white, and yellow. 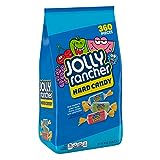 Check out this complication of Jolly Rancher commercials:

Jolly Rancher Candy managed to stick around and has been a popular treat for generations. Its sweet, sugary, and fruity taste will eventually cure every sweet tooth. There is a perfect balance of sweet and sour and fruity flavors until the candy is crunchy. No matter the flavors, all Jolly Ranchers are simple and, therefore, loved by kids and adults alike.

Which Jolly Rancher flavor is your favorite? Share your thoughts in the comments section.