Take 5 candy is a bar of rectangular in shape and contains many different key ingredients. Unlike some candies that showcase only one or two flavors, such as chocolate and peanut butter, Take 5 instead highlights the taste of milk chocolate, peanuts, caramel, peanut butter, and pretzels. Now called Reese’s Take 5, this candy bar uses Reese’s Peanut Butter to help bring out a specific flavor.

The Take 5 bar may not have achieved the sales record of some of the bigger candy brands, but the Take 5 does have a very loyal following of fans. The Take 5 is a brown chocolate bar, lumpy and rectangular; Inside of the Take 5, there is a significant amount of pretzels, as well as caramel and peanuts.

In an attempt to improve the product, Hershey’s designed a new logo and wrapper for the Take 5 candy bar and renamed it Reese’s Take 5 to focus on Reese’s peanut butter, one of the ingredients in the bar that young adults often enjoy. Then the Hershey Company released four alternative versions of Take 5 in 2005 and 2006. Chocolate cookie, Marshmallow, peanut butter and white chocolate, with the first two replacing the pretzel and caramel with chocolate cookies and marshmallow puffs.

In 2006, when the price of cocoa butter increased dramatically, Hershey and other manufacturers substituted vegetable and sesame seed oil, but in 2014 Hershey reverted to cocoa butter, perhaps to meet the FDA guidelines that milk chocolate must contain cocoa butter and milkfat.

In 2016, Hershey worked with a panel of millennial students to design a new wrapper and logo for Take 5 as part of a youth-oriented comeback campaign. The new wrapper had a black background with ringed gray stripes and a new lime green logo. This change lasted about 3 years before the packaging was again redesigned.

The Year Take 5 Was Invented

According to the surveys, one of the most popular candies in 2004 was candy corn. This candy is a small, bite-sized treat with a pyramid shape and three different colored textures. The candy has a waxy texture and a sweet flavor. This candy is mainly used during celebrations such as Easter and Halloween in the United States.

How To Make Take 5 Chocolate Candy At Home

Did you know that you can make Take 5 candy at home, and it is not hard at all? All you will need is creamy peanut butter, caramel squares, milk, pretzels, powdered sugar, peanut halves, and milk chocolate chips.

First, you lay out the pretzel. Mix peanut butter and powdered sugar together and put them in the microwave for 30 seconds, so they will get a light, creamy texture. Then you will have to put this peanut butter on top of each pretzel. In a separate bowl, mix and microwave caramel squares and milk for 30 seconds.

The next step is to spread this mixture on top. Put those little pyramids in the freezer for 20 minutes. Melt the chocolate chips and dip the frozen combination in them. Your homemade waited for 30 minutes, and that is it. Take 5 Candy is ready.

The Company That Makes Take 5

The company that makes Take 5 candy is The Hershey Company, one of the largest chocolate manufacturers in the world. Hershey’s owns many candy and snack products such as Almond Joy, Whoppers, Twizzlers, and Reese’s Peanut Butter Cups.

Hershey Corporation is one of the largest confectionery manufacturers in the world. One of the best-known products that are made by them is Hershey’s milk chocolate, which was the most popular candy in 20th century America. The headquarters of Hershey is located in Hershey, Pennsylvania.

The company was founded in 1892 by Milton S. Hershey. At first, it was called the Hershey Chocolate Company and belonged to the Lancaster Caramel Company. After Milton Hershey saw the German machine that was used for chocolate pressing, he decided to create sweet treats and went into the chocolate business.

By 1900, he had already sold the first business, Lancaster Caramel Company, and started working to make and sell the perfect milk chocolate bars.

The Reese’s Peanut Butter Cups was invented by Harry Burnett Reese. He founded the H.B Reese company back in 1923. Harry was working for the Hershey corporation in the early 1920s. However, he had a very strong desire to create something new. Therefore, he would do different kinds of experiments in the basement. As a result of much effort, he managed to invent the Peanut Butter Cups. The candy was released as a part of an assortment in 1928.

Harry Burnett Reese passed away in 1956. He left his company to his six sons, however, in it. Today, the Reese family is the owner of 16 million Hershey shares. The H.B. Reese candy company merged with Hershey corporation in 1963 and became part of Cups, which became one of Hershey corporation’s top-selling confectionery products in 1969.

The very first peanut butter was patented and invented in Canada in 1884. The invention was made by Marcellus Gilmore Edson. He milled roasted peanuts on the hot plate and received the paste textured peanut butter. The product was patented in 1895 by John Harvey Kellog.

Take 5 has had several names over the years. When the candy was first introduced into the American market it was called Take 5, though in Canada the candy was called Max 5 when it was released to the region. The name Max 5 appears to be discontinued as of 2019 or earlier, although the candy itself is still made under the name Take 5, at least in the United States. In the year 2019, “Take 5” was renamed “Reese’s Take 5”, this was done in an attempt to improve the product’s popularity, as Reese’s name has achieved much fame over the years.

The first logo of Taking 5 candy was introduced in 2004. The first logo is in white, black, and gold. The word “take” is greenish golden, and all letters are uppercase. Number “5” is presented in white. On the left side of the logo, there is half of the chocolate where the filling is visible.

The second logo has different colors in comparison to the first one. This version was introduced in 2011. The golden color is replaced with yellow in the letter colors. Another different thing is that the picture of a chocolate bar is on the right side of the logo.

In 2016, the third version was released, and this one is a total modification of the old ones. It has a blank black square background. The “take” is in uppercase letters and has a different, more sharp font. In this version, the light green color is introduced, which brings additional light and vibrancy to the logo. The number “5” is much larger in size than the name and is located on the right side.

The last version was created in 2019 after Reese’s acquired the candy bar and was renamed “Reese’s Take 5”. The squared black background is removed, and the black color is only used as an outline of the candy’s name. The word “Reese’s” is in a bright yellow color and has a dark brown outline. Right underneath it, “Take 5” is written just in the same color as it is in the 2016 version.

Take 5 candy is not available and is not for sale in large supermarkets. Since its name changed and the new product Reese’s Take 5 was introduced, it can be found under the new name. Some state that they are two different products. However, they taste exactly the same and have the same ingredients.
Places, where you can get this delicious treat, include Walmart and Target.

However, no matter which part of the world you live in, you can order it off of Amazon and get this delicious treat delivered straight to your address. You can get them in a snack bag size or as a box that contains 18 pieces of a candy bar. They are individually wrapped and have a kosher certification. Additionally, one serving of this chocolate candy consists of 210 calories. 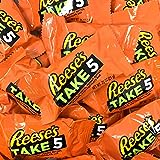 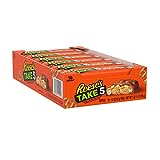 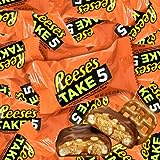 You can also buy Take 5 at Old Time Candy by clicking the image below.

Here are the ingredients of Take 5 Candy.

Here are some commercial videos for Take 5 to watch:

“Take 5” chocolatey sweet treats will eventually wake up the taste buds and satisfy your sweet cravings. You will get a mix of five amazing ingredients with just one bite. If you eat them at the same time, they layer on top of each other, and a smooth texture is created.

Take 5 Candy comes in the perfect balance of sweetness and saltiness. If you love those ingredients separately, can you imagine the heavenly texture and taste when combined together? The candy is a perfect addition to an Easter basket or Halloween celebration.

Share your experiences and opinions about Take 5 Candy in the comments section below.

What is in a Take 5 Candy bar?