Trix cereal is familiar to many people. This is one of the most popular cereals in the world and for good reason. It is sweet, fruity, and delicious and offers fun shapes as well as creative branding. There are not many other kinds of cereal that are so recognizable and many people are familiar with Trix and the Trix rabbit.

If you have never tried this delightful sweet cereal, you need to make sure that you run out and get some. There are not many other kinds of cereal that are as recognizable as this one and you probably remember it from your childhood. Trix cereal is still going strong and is one of the best cereals on the market.

Trix was born in 1954 as a sugary version of their already-popular Kix cereal. Both cereal types are still easy to find today and most people have eaten them today. The original composition of the cereal included 46% sugar! This has since been changed to create a healthier cereal for kids to eat.

This yummy cereal originally came in three flavors: orangey-orange, lemony-yellow, and raspberry-red. These shapes were then later expanded to add grapity-grape, lime-green, and wildberry blue. The 5-color model is most familiar to those who have enjoyed the cereal since the late 90s. The original advertising included a simple flamingo mascot which was later replaced by the rabbit that we all know and love today.

The original Trix was not made in fruity shapes. This was an added feature that came about in 1991. This has been one of the most memorable features of the cereal and people will remember this even if they started out enjoying the cereal in the original simple shapes. That is how connected the fruity shapes have become with the brand.

Originally, the fruity shapes of this 50s candy were swirly in color, but kid-tasting groups said they liked the taste of the solid fruity shapes better and the swirls were discontinued. There have been changes that have brought back some of the more generic shapes to accompany the fruity shapes over the years, but the original flavors all get their own fruit shape.

For those who love the recent new flavors, they have added varieties since the early 2000s with watermelon, berry-blue, and even yogurt-branded flavors. There is even a Trix yogurt spin-off that offers all the goodness of Trix in familiar flavors.

As of 2017, the 6-flavor cereal was introduced back to the market without artificial flavors and colorings. This was a fun nod to retro flavors and allowed younger users to enjoy all the traditional flavors. All of these flavors have always been associated with fruits and the cereal has always been fruit-shaped as a result.

Trix was made a staple of kid breakfast options over 60 years ago. The cereal was very revolutionary at the time and was aimed entirely at children. General Mills knew they had a hit and they kept the cereal around, knowing it would stand the test of time. The original cereal was marketed as a treat more than a breakfast.

The original Trix Rabbit made its debut in 1959 with a simple line-drawn rabbit. This rabbit was instantly popular and connected with the cereal for good. The cereal ad was the brainchild of Joe Harris and the Trix cereal rabbit was an instant hit.

The Trix rabbit also cemented the very familiar slogan, “Silly Rabbit, Trix Are for Kids”. The original ad showed the rabbit saying that he did not like carrots and preferred the cereal. Some version of this slogan has been in almost every Trix ad since.

In 1960, the Trix rabbit was added to the cereal boxes, which had originally shown kids eating the cereal and other simple drawings. The branding of bright colors and the rabbit was firmly attached to the brand now.  The Trix rabbit underwent a transformation, appearing first on the box as a paper mâché style rabbit and later as a stuffed type rabbit. Later, he was shown in a more cartoony way that is more familiar to younger kids these days.

The company used Trix to run a nationwide search for the perfect real rabbit to appear on the box. The final winner was a 2-pound Holland lop that was named Houston.

The Origin of the Trix Rabbit

General Mills added the Trix Rabbit to the mix as early as 1955 The rabbit was a trickster who was trying to steal the cereal from kids who were enjoying the cereal. The cereal with its rabbit mascot was introduced as a puppet on TV shows like Rocky and His Friends as well as Captain Kangaroo. This helped get the cereal and its mascot in front of kids everywhere and the rabbit was forever associated with Trix.

Where is Trix Sold?

Trix is available across the US and you can get smaller boxes at gas stations as well as private grocery stores. You can order the cereal from Amazon and Walmart and through General Mills directly. This is one of the easiest products to find anywhere around because it is so popular even today. Your local grocery store should offer any variety of Trix that is currently being made and you can usually find both smaller and larger sizes of the cereal boxes on shelves at your local grocery store or grocery outlet. 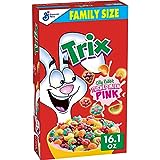 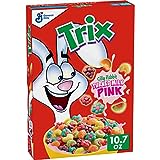 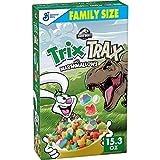 Trix Cereal has stuck by the familiar slogan, “Silly rabbit, Trix are for kids!” since the 60s. This was such a successful method of marketing to kids that the slogan has stuck it out until today.

There were efforts to attach the cereal to other products like the Walk Squawkie Talkie, which was a popular string and can telephone. There were also pillowcases that were advertised in TV ads as well as on cereal boxes.

Kids were engaged over the years to vote on changes to the brand like in 1976 when they were called upon to vote about whether or not the rabbit was allowed to finally eat Trix. This same promotion was advertised on cereal boxes again in 1980, 1984, and 1991.

The Trix cereal branding has not changed much over the years, other than the changes to the Trix rabbit itself. The rabbit was originally stuffed-looking and later looked more like the cartoon rabbit that everyone is familiar with today. The overall colors of the box and labels and branding have not changed much since the 1960s.

This information comes from Amazon:

Trix cereal is sweet, fruity, and delicate to eat. You will love that this cereal is so yummy and that you will enjoy all of the sweetness and fruitiness without worries about the cereal being heavy or melting away in your milk. This is a really fun cereal to eat and it stays crunchy even when it has been in milk for a bit.

Specialty flavors like watermelon and lemonade offer their own unique sweetness to the cereal and you can get these kinds of varieties in some locations or at specific times of the year.

There were Trix comics starting in the 60s and many kids were just as familiar with the comics as they were with the cereal.

The original ads featured the voice work of Mort Marshall, who sometimes proclaimed that Trix was, “Sometimes for tricky rabbits!”

The Trix Rabbit also appeared in other product ads, like Got Milk? Ads and more. In 1946, Trix was associated with Disney’s A Song of the South and the movie styling appeared on boxes of the cereal. In 1985, Bugs Bunny tried to help the Trix rabbit get his taste of the coveted cereal.

There was an episode of the Fresh Prince of Bel-Air that featured the Trix rabbit in a speech by Carlton.

Currently, General Mills is asking for photos of rabbits who can take over as the new Trix rabbit. The winning rabbits will get their photos put on advertising materials for the cereal.

In 1995, one of the promotions included finger spoons. These came in three colors and were made with a swirly handle that would allow kids to have fun eating cereal with their fingers.