KiX cereal is a puffy, sweet breakfast treat that was introduced in 1937 and remains a favorite in the General Mills product line. Over the years, General Mills added a couple of variations, including Berry Berry KiX and Honey Kix.

While it was definitely not the first breakfast cereal, even at General Mills, it was the first of its kind. Before KiX, General Mills only offered flaked cereals, and other companies were offering some puffed wheat or rice cereals, but none like KiX cereal. A key invention led to KiX and many other types of cereal.

That invention was the puffing gun, and its invention was a more like an evolution. The first puffed up cereal was introduced by Quaker in the early 1930s and it was made of rice and wheat. The technique used at Quaker involved a baking and drying style that made the rice or wheat puff with air, making it enlarge to several times its normal size. Quaker had a patent on that process.

When the patent expired, a General Mills engineer took the process and tweaked it, developing a puffing gun that took corn and turned it into puffy round pellets. That product became KiX cereal. A few years later, oat dough was put in the puffing gun, and that was the origin of another breakfast megastar: Cheerios.

Here is how the puffing gun was described:

“Going into the forty guns which look like heavy steel barrels, the cereals are damp and soggy. The barrels are clamped shut and revolved as the heat and pressure in them slowly rise. When the pressure has reached about 100 pounds, a workman flips the gun over, aims it at a wire screen and pulls a trigger. The gun goes boom! and a shower of Kix or Cheerioats [now Cheerios] hits the screen like hail.”

But the origin of KiX cereal begins even before the puffing gun. In the 1920s, General Mills was looking for its niche in the breakfast cereal market. They assigned a team to conduct research and find out what customers wanted most in a cereal. One of the main requests was a cereal that didn’t get soggy in milk like the flaky cereals did at the time. The other customer wish that floated to the top was a cereal that contained more vitamins than others on the market.

Appealing to that customer feedback, in a 1938 advertisement for KiX cereal, General Mills emphasized that the airy cereal wouldn’t soak up milk and get soggy and said it had the scientific tests to prove its crunchy claims.  General Mills also spotlighted the vitamin content of the cereal by saying each puffy nugget was coated with vitamin B, D, calcium and phosphorus. Later commercials called KiX cereal a “food for action” that contained 83 percent energy.

General Mills, like many cereal companies, used free items with purchase to market their cereals, and KiX benefited from a partnership with “The Lone Ranger.” Kids could exchange cereal box tops for Lone Ranger safety belts, silver bullet compasses, weather rings and other treasures over the years. KiX cereal set a record for cereal premiums in 1947, its last year as the official cereal of “The Lone Ranger.” The offer was for a glow-in-the-dark Lone Ranger atomic-bomb ring. Customers just had to send in one KiX box top and 15 cents. The company received 1.6 million box tops from customers in that campaign, along with $240,000 in change. That’s a lot of nickels and dimes.

When many popular breakfast cereals were developed, they often came with distinct or popular mascots. Think Snap, Crackle and Pop or Tony the Tiger. Those characters became integral to the marketing for Rice Krispies and Frosted Flakes. And take, for example the Pebbles cereal line. Those cereals were developed specifically for a partnership with The Flintstones.

KiX cereal never had a mascot, at least not one that stuck. In 1955, KiX did have a television commercial that featured Puffman, a human figure made up of corn puffs. The Puffman character was shown helping a child perform a swan dive. It was not exactly cute, cuddly or cool, so the Puffman was quickly retired.

Other attempts at creating a KiX character included a ads featuring a child sporting pajamas, a farmer, a hippie-style dude with a goatee and a saxophone but no body, and a cow. The cow was especially problematic. One commercial showed the bovine punching a human who was complaining that the cow’s milk made his cereal soggy. That cereal was not KiX, of course, which would never dare get soggy. It was a flaked cereal, and the cow told the victim that he better switch to KiX in the future if he wanted a crunchy, puffy breakfast. Not exactly a wholesome commercial. The cow didn’t make it into many ads after that.

In 1978, General Mills came up with a slogan for KiX cereal that was so successful it was used for decades. The familiar phrase was: “Kid Tested. Mother Approved.” This was followed in the 1980s with a companion jingle that said, “Kids love Kix for what Kix has got. Moms love Kix for what Kix has not.” This highlighted the healthy nature of KiX which, according to the advertising, had no added food coloring or flavors.

The message that KiX cereal was more healthy than some of the other breakfast cereals that aimed its marketing to children was intentional. With no flashy mascot, the cereal’s beige color and its less than exciting packaging, KiX cereal appeared to be a more natural choice.

General Mills is headquartered in Minnesota and is the parent company of some of the brands that have become household names in America and internationally. These include Betty Crocker, Yoplait, Pillsbury, Chex and, of course, KiX cereal.

The company that started KiX goes back to 1856, tracing its origins to the Minneapolis Milling Company. The company was founded by Illinois Congressman Robert Smith. Shortly after that, the Washburn brothers acquired the company and built huge mills. They were so large that some people thought they wouldn’t succeed, but the Washburns proved the doubters wrong.

In 1877, the Washburns entered into a partnership and began producing wheat flour. In 1878, one of the large mills was destroyed in a devasting flour dust explosion that killed 18 workers and led to the construction of a newer, safer and more efficient mill.  In 1880, the company’s flour brands won gold, silver and bronze medals at the Millers’ International Exhibition, which led to the debut of the Gold Medal flour brand.

In 1928, after yet more partnerships and mergers, the General Mills company was formed. Just a few years later, the famous puffing gun put General Mills and KiX cereal on the map.

The “Kid Tested. Mother approved” slogan was tweaked in 2018. General Mills updated the KiX catchphrase to be gender inclusive, changing it to Kid Tested. Parent Approved.

In addition to recognizing the cultural trend to move away from gender stereotypes, General Mills has recognized other cultural shifts. For example, the company says it strives to get all of its corn for KiX from farms with sustainable practices and that some of the honey used in Honey comes from women-led small businesses.

In 1987, General Mills celebrated the 50th anniversary of KiX by intensifying its marketing of the lower-sugar cereal to kids. This approach worked. In just a few years, KiX’s sales doubled to $96 million in 1990. By 1991, sales rose another 30 percent. In the second quarter of 1991, supermarket sales rose 30 percent from a year earlier, according to Information Resources Inc.

The winning approach: Placing ads for the cereal during children’s shows and targeting the marketing to children with the message that KiX is a healthier option that tastes great, even without the significant sugar other cereals contain. The company wanted to offer children the opportunity to make a mature choice. 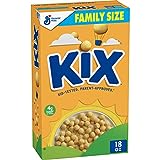 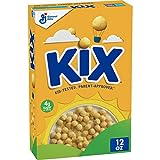 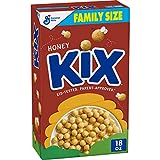 In addition to KiX cereal and its flavor variations, General Mills makes these popular (and not as popular) breakfast cereals.

General Mills hasn’t hit a homerun with every cereal it has introduced, but it certainly has tried to corner the market by releasing a large array of varieties. After all, not every cereal can be a KiX.

Here are some of the most unusual cereals that were released and later discontinued.