Lucky Charms breakfast cereal is a headliner in the General Mills product lineup. The sweet, toasted oats cereal mixed with iconic colorful marshmallow shapes made their way to American tables in 1964.

The breakfast cereal was created after General Mills issued a challenge to its team: Make a unique new cereal using the same manufacturing capacity as a couple of their other cereals: Wheaties and Cheerios. The idea for Lucky Charms was born when one of the product developers did an experiment, mixing Cheerios with a treat called Circus Peanuts.

The version that first hit the market was a bit different than the Lucky Charms Americans would soon come to know so well. The cereal was not sugar-coated and didn’t have the sales General Mills had hoped for. Once that layer of sweetness was added, the cereal began to sell much better. The new recipe, along with an expanded marketing campaign, made Lucky Charms a top brand.

The recipe for Lucky Charms, once tweaked to be sweeter, has remained unchanged, though General Mills has introduced new varieties. In 2005, they released Chocolate Lucky Charms, and in 2012, Lucky Charms Marshmallow Treats hit grocery store shelves.

The marshmallow bits, or “marbits” as they were named when patented in 1968, were transformed into colorful shapes at the suggestion of an advertising company. They were modeled after charm bracelets, which were a popular trend at the time. The lineup of charms in the original Lucky Charms were pink hearts, yellow moons, orange stars and green clovers.

From the start, Lucky Charms had a charismatic mascot – a leprechaun originally named L.C. Leprechaun who later became known as Sir Charms and Lucky the Leprechaun. Lucky was the mascot across America until 1975, when he was replaced in New England by a character named Waldo the Wizard. Waldo was a a kind wizard who could be a bit absent-minded. While he did well in market research, Lucky the Leprechaun beat him out and eventually became the mascot throughout the country again.

Lucky the Leprechaun was voiced by Arthur Anderson until 1992, and was later voiced by a number of actors, including Eric Bauza, Tex Brashear, Jason Graae, Doug Preis and Daniel Ross.

Lucky Charms commercials featuring the leprechaun had pretty much the same theme: Lucky uses all his magical powers to stave off hungry children who are always trying to snatch his cereal, or as he proclaims, are always “after me Lucky Charms.”

In 2008, General Mills revealed that Lucky’s powers are tied to the Lucky Charms marbits. The heart gives the leprechaun the power to bring things to life, the star gives him the ability to fly, and of course, the clover gives him luck. Other charms with magical powers include the horseshoe that allows Lucky to speed up time, the blue moon that grants him invisibility, and the balloons that provide him with the power to make things float.

Though the basic formula for Lucky Charms remained largely unchanged, one thing that did change – and change frequently – were the marshmallow bits. General Mills found that changing the shapes and colors increased sales. They have released more than 40 limited-edition versions, and the company devotes a lot of time and money researching new ways to spark interest and keep their customers buying the breakfast cereal. That research found that Lucky Charms fans like brightly colored marshmallows rather than the soft, pastel-colored bits that filled the boxes in early boxes. Below is a rundown of some of the special shapes introduced over the years.

While Lucky Charms got their fair share of new and limited-edition marshmallows, some older varieties had to be retired to make way for the newbies. The first to go were the yellow moons and blue diamonds in 1994. They were replaced with pots of gold and blue moons. The hourglass shape was retired in 2018. The clovers, once retired, returned in 2004. The only shape that has always been included is the pink heart.

For years, Lucky Charms had a signature slogan: “Frosted Lucky Charms, they’re magically delicious” set to a simple Irish tune. The first line was typically sung by kids, and the second was sung by Lucky the Leprechaun. Later commercials added to the jingle with descriptions of the charms of the time. Examples of additional taglines:

In 2018, General Mills came up with a chocolate version of Lucy Charms, dubbing it a “Winter Edition.” The cereal had a chocolate flavor that turned milk into chocolate milk, and the marshmallow bits were wintery shapes such as snowmen, snowflakes and snowballs. Lucky the Leprechaun was dressed for the cold, too, wearing mittens and earmuffs on the packaging. This Lucky Charms version only lasted for a year and was not brought back. Sales were not spectacular.

Another promotion in the early 1990s offered consumers a special gift. A new marshmallow bit – the pine tree – was added to the cereal, and customers who sent in two proofs of purchase and a special certificate would receive a live Colorado blue spruce seedling to plant in their backyards.

In 2020, a St Patrick’s Day edition of Lucky Charms was offered. The cereal included the tradition four-leaf clover marshmallow bits, joined by gold coins and pots of gold. General Mills created an animated commercial for the St. Patrick’s Day cereal and offered a find-the-leprechaun game on the back of the box and a partnership with Amazon’s Alexa that featured an adventure story theme. 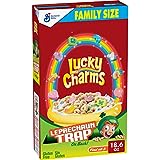 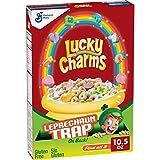 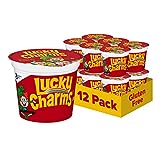 While General Mills made a lot of changes to its marshmallow lineup over the years, the base cereal made of sugar-frosted oats went unchanged until 2020. That’s when a Lucky Charms Honey Clovers hit the market. The new cereal, made with corn and coated with honey, featured the same marshmallow bits contained in the original cereal.

While the new version was quite a departure for the brand, it didn’t come as a big surprise to anyone who follows the cereal industry. An Instagram account dedicated to breakfast cereal leaked a picture of the Lucky Charms Honey Clovers box before it came out.