There are many different brands of cereal in the world, and all of them try to offer a unique value to consumers. However, if you know what you are looking for, the offers can be filtered down. We have to choose what we eat carefully because it highly affects our bodies and everyday productivity. One of the most famous and loved breakfast cereals is Wheaties. Wheaties is known as the “breakfast of champions.”

Wheaties is a breakfast cereal brand, manufactured by General Mills Company. The product is American and is considered a cultural icon of the country. The brand of cereal is famous for its campaign that uses famous athletes as the brand face.

Washburn’s Gold Medal Whole Wheat Flakes was the name by which the Wheaties were introduced to customers in 1924. Wheaties mainly consist of wheat and bran and come in the form of flakes.

How Wheaties Was Created – A Happy Accident

Believe it or not, Wheaties cereal flakes were actually invented by accident. It was the result of a wheat bran mixture spilling on the hot stove. On high heat, it crackled and turned into a crispy flake. The idea was born immediately. The Washburn-Crosby Company was responsible for refining the idea. It took them 36 attempts and 3 years to finally create strengthened flakes that would withstand the packaging. This experimental process was conducted by George Cormack, who was the head miller of Washburn.

The cereal was named after the company and called “Washburn’s Gold Medal Whole Wheat Flakes”. However, the name seems to suggest that it was not satisfactory for them. So, soon a contest was held among employees of the company for the name of these cereal flakes. The content winner was Jane Bausman, whose idea was to name the cereal “Wheaties.” Jane was the wife of the company’s export manager. The other offers for the names were “Nutties” and “Cold Medal Wheat Flakes”, but eventually, Wheaties was the winner. It’s short, easy to remember, and a perfect representation of the product. 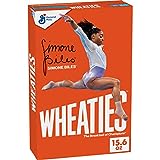 General Mills is a multinational American company that was created in 1928. It was a result of the incorporation of the Washburn Crosby Company. The headquarters of the corporation are in Golden Valley, Minneapolis. Originally, it was a flour mill. The company gained its fame during the Great Depression as a food processor. Today, it specializes in making cereals, flour products, prepared mixes, and snacks. One of the most famous brands of products marketed by General Mills is Cheerios, Gold Medal Flour, Lucky Charms, Cocoa Puffs, Chex, and Count Chocula.

One of the most famous food advertisers, the character Betty Crocke, was created by General Mills. Soon after its appearance, Betty Crocker became one of the leading brands of cake mixes and products that are used in baking.

One of the first advertising campaigns for Wheaties was done via a radio station located in Minneapolis. It was the first pre-recorded promotional advertisement jingle. The tune of “She’s a Jazz Baby” was used, and specially designed lyrics were added -“Have you tried Wheaties?”. It was created by Bill Holmes and David Mill.

The Wheaties brand is strongly associated with sports. This tie started with the advertisement that was on the wall of Nicollet Park. The Wheaties brand was the sponsor of the broadcast of the minor league baseball team – called the “Minneapolis Millers”. After this sponsorship, the brand’s billboards appeared in the park in Minneapolis. On the billboard, there was a box of Wheaties and the following slogan: “Wheaties- The Breakfast of Champions.”

With the baseball broadcast sponsorship, the Wheaties brand attracted a lot of attention, and in the end, dozens of radio stations had events sponsored by Wheaties, and in return, the radio stations promoted the product. For advertisement purposes, the brand used athletes. They stated that the Wheaties truly was the breakfast of champions.

The brand reached its popular peak in the 1930s. The circle of athletes promoting the brand grew rapidly. The list included racers, aviators, parachutists, footballers, basketball stars, and many others.

At the beginning of the 1940s, the brand was so famous that 46 players in the All-Star Game were promoting the cereal product. Eventually, because of these strong ties, one of the very first TV broadcasts of baseball was sponsored by Wheaties.

As it seems, the Wheaties brand was sponsoring hundreds of brands and people, mainly involved in the sports industry. However, all this caused the high costs, and they decided to start making more simple commercials that also involved sports testimonials. Even though it was less effective, it also helped them lower the cost.

Changes in the strategy started at the beginning of the 1950s. The brand changed its course and aimed a new focus on children. The result of this change was pretty satisfactory for the Cheerios, which was also manufactured by General Mills. However, it seems like in Wheaties’ case, it did not work that well.

Sales went down pretty fast. The reason for this may be the fact that cereal is known to be associated with adults, sports, and a healthy lifestyle. It seems like people did not like the idea of eating “kids’ food.” Well, that advertisement caused the creation of a new consumer group — children. However, it could not balance the declined sales.

Not surprisingly, the sales went down rapidly because new promotions were targeting children. To solve that problem, in 1958, the brand started to return to its original idea and stick close to the sport. The team created a marketing strategy that consisted of three elements. The first one was to select a spokesman for the brand, and eventually, Olympic champion Rob Richards became the iconic figure.

After that, they returned to television and promoted pre and post-game shows. The most important part was to create the Wheaties Sports Federation, which was focused on the promotion of physical health and fitness.

The Red Barber may also appear in one of the most memorable advertising commercials. In 1978, Bruce Jenner participated in a commercial video. You could see him pouring the Wheaties cereal into a bowl and adding milk and sugar to it. This act was followed by his words that Wheaties truly was a champion’s breakfast.

How is Wheaties Related to Ronald Reagan?

Eventually, at the early stage of Roland Reagan’s career, he had a connection with Wheaties. He was a sports broadcaster in the early 1930s. He became the most popular Wheaties advertisement announcer in 1937 and received many awards. One of the awards was a trip to California. There he took the screen test for Warner Bros. This was the beginning of his screen career, and soon after, he moved into show business. Ronald Reagan became the United States’ 40th president.

What is Wheaties made of?

Wheaties are advertised to be full of nutrition and a source of long-lasting energy. Flakes are very low in sugar and calories. The product is made from 100% whole grain. The cereal is high in fiber, which makes us feel full. It provides a daily dose of muscle-building iron of 45 percent. Even though it does not have a particular flavor, it is a very good base for different add-ins such as nuts, berries, etc.

Wheaties became one of the most famous snack brands in the 1960s. It had 7% of the total cereal market in the USA. However, today the situation has changed. Sales have fallen by more than 5%.

Nowadays, Wheaties is losing the battle with other cereal brands. The main competitor can be considered Cheerios, which is also produced by General Mills. The reason for this may be the fact that Wheaties may not be healthy enough for healthy eaters but too healthy for junk food eaters, according to CNBC. Times change and people’s wishes and needs change, so every brand should follow and update their strategies according to those changes. It seems like that did not happen in Wheatie’s case.

Breakfast is one of the most important parts of our day. According to research conducted by the global information and measurement company Nielsen, the most popular breakfast food in America is cereal. Cereals have a leading place in the world and are popular not only in America. But why is that?

First of all, cereal is very easy to prepare and its cost is very low, especially in comparison to other breakfast foods. It is also inexpensive. Another reason is that cereals are considered healthy foods that fill our bodies with fiber and need nutrition, which helps with weight loss.

So, what is your choice of breakfast food? What is your favorite brand of cereal and why? Share your thoughts in the comments section.

Who has made the most appearances on the Wheaties Cereal Box?

Michael Jordan holds the record for most appearances on a Wheaties box, a total of 18 times, followed by Tiger Woods at 14 times.