Cheerios are one of the most popular cereals that has ever been sold and many people around the world are familiar with this yummy o-shaped cereal product. Many people use it as a snack for their kids and they are one of the healthier cereals on the market especially if you are looking for an easy breakfast without a lot of added sugar and calories.

Cheerios have cemented themselves into the hearts of people all around the world for their fun finger-food shapes and their delicious but simple taste. They are sold in many varieties now but the original Cheerios recipe is still the most popular version of this tasty cereal and snack treat.

Cheerios was intended by General Mills to replace the boring landscape of post-depression era oatmeal and morning mush. It was also intended to be more palatable than Wheaties and Corn Flakes which were staid choices that were reliable but dull. This was the first puffed oat-based cereal and the popularity of the cereal today tells you how successful this transition was for General Mills.

Cheerios were first sold on May 1, 1941. It was called CheeriOats at the time and was shortened to Cheerios in 1945 after a dispute with a competing cereal manufacturer with a similar product. The process that was used to create Kix cereal in 1937 was the foundation for the original Cheerios cereal. General Mills created and developed the cereal and they still manufacture it today.

Physicist Lester Borchardt was tasked with creating a machine that would puff oat dough into a crunchy cereal that was ready to eat right out of the box. This required hours and hours of work as well as lots of money to be spent, but the end result was a machine that allowed for the birth of Cheerios to be possible. General Mills used this same machine to create other puffed oat cereals throughout the 50s and 60s like Jets, Trix, Cocoa Puffs, and Total.

Cheerios are sold under the Nestle brand label in the UK but have the same name and in Australia and New Zealand, they are sold under the “Uncle Toby’s” brand. The recipe for the original cereal is still the same, even when sold overseas in these locations. You can get the same oaty and satisfying experience when you buy in these locations as you can when you buy within the US.

General Mills says that more than 500 formulas were tried out during the original testing process and 10 shapes and sizes were given a trial as well. The ideal combination is the end result that you can still buy today. The original ideas for shapes included stars, spheres, squares, and dumbbell shapes. The O shape packed best into boxes and was the most durable when packaged so it was determined the ultimate winner.

Most of the variants that are sold today are seasonal offerings that come out around holidays. Pumpkin Spice and Dulce de Leche are flavors that are often sold only during the holidays for example. The original version of the cereal still sells 139 million boxes each year, which means that it is still the most popular. Honey Nut retains the second position each year overall by selling 129 boxes on average.

The original marketing campaigns for the cereal were aimed at kids and Cheeri O’Leary was the first mascot of the cereal. These ads ran from the 40s to the 50s with Cheeri O’Leary and her little sidekick Sue selling this product to kids everywhere. There were even World War II era ads that highlighted that the cereal was included in military food supplies. This campaign showed military men with the cereal in their “Yank Packs” and stated, “He’s feeling his Cheerioats”.

By the 60s, Cheerios were appearing in cartoons and comic strips such as Rocky and Bullwinkle. Hoppity Hopper was a frog who helped convince kids that Cheerios were fun to eat during this time as well. Buzz the Bee would later help tell children about the merits of Honey Nut Cheerios.

Cheerios became one of the first brands to partner with Disney and other large brands to cross-sell products for both businesses. Even the Lone Ranger and other popular children’s toys were sold inside Cheerios boxes during the height of the toys-in-cereal craze. They also offered discount coupons on comic books inside Cheerios boxes and even advertised for the Mickey Mouse Club in the late 1950s.

Cheerios worked hard to link themselves with a healthy breakfast that would keep your kids ready to learn and grow all day. This health-conscious association often leaned heavily on the full-grain nature of the cereal that did not include nearly as much sugar as other brands that were selling in the same space. This health focus was part of what made the shift from Cheerios just being sold as kid’s cereal to being sold as an also for adults cereal as well.

In the interest of promoting the healthy nature of the Cheerios brand, General Mills made an abortive effort to claim that Cheerios could lower your bad cholesterol by 4% in six weeks. The FDA cracked down on this ad campaign because they said that Cheerios would have to apply to be a cholesterol-lowering drug if these claims were true. Today, boxes of Cheerios still state that eating Cheerios is part of a healthy diet that can lower your cholesterol but they make no further promises beyond this.

General Mills revealed in 2014 that they were getting rid of some of the genetically modified ingredients. They have also become gluten-free. The cereal was also recently boxed in July 2021 for a limited re-release that uses the original Cheerioats name. 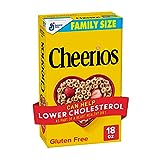 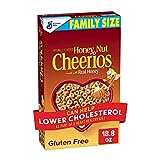 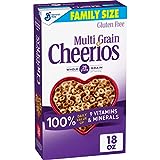 From the Cheerios Homepage that lists the information and history of Cheerios, this is the ingredient list for regular Cheerios:

This is a simple list, but look at all the goodness from the mineral content that is added to this cereal! This is one of the reasons that Cheerios has always been a go-to snack and children’s cereal. This is one of the healthiest cereals on the market today with only 1g of added sugar.

Cheeri O’Leary was the original mascot for the brand and was featured in TV ads as well as print campaigns and comics. She often interacted with famous entertainers of the era like Charlotte Greenwood, Barbara Stanwyck, and Dick Powell.

The Cheerios Kid came onto the scene in the mid-50s and was featured in ads throughout the 60s. This campaign included TV ads as well as print advertising as the Cheerios Kid dealt with problems that were facing adults and kids nearby after being powered by snacking on the cereal.

The jingle for the brand called, “Get Yourself Go” was written by Neil Diamond and was used for the campaigns as well as later campaigns in the 80s and 2012. Some of the traditional mascots have been revived during these short and limited run commercials as well.

In the 80s, characters from the Peanuts comic strip and movies were used in many Cheerios commercials. The character would reinvigorate themselves with the cereal and then take care of a problem or an activity while declaring, “You’re on your toes with Cheerios!”

Shawn Johnson was the first athlete to be presented on boxes of Cheerios cereal and this campaign ran briefly in the Midwestern states of the US. In 2013, a campaign called, “Just Checking” highlighted the heart-healthy claims that have long been associated with the cereal. There was also a 2014 Super Bowl Ad that ran on a similar premise.

The misleading ads that were protested by the FDA:

When can babies eat Cheerios?

How many carbs in Cheerios?

Cheerios have about 20.50 grams of carbohydrates per 1-cup serving.

How are Cheerios made?

To make Cheerios, the dry ingredients are first mixed with water resulting in a raw batter that will eventually become the familiar O-shaped cereal. Cheerios get their classic shape when the batter is pressed through special molds. Each tiny circle is then put through a drying process. Following this drying period, hot steam is applied to the cereal in a special pressure cylinder. When the cereal is removed from the high-pressure cylinder and returned to a normal atmosphere, the water inside turns to steam and causes the Cheerios to puff up. At this point, the cereal is almost done. A little more drying time, as well as the addition of sprayed-on vitamins and minerals, completes the process.

How many calories in a bowl of Cheerios?

One cup (28 grams) of plain Cheerios without milk provides 100 Calories.

How do Cheerios lower Cholesterol?

According to General Mills’, the whole grain oats contained in Cheerios contain soluble fiber (one 28g serving contains 1g) that “act as tiny sponges to soak up and remove some cholesterol from the body“.

What are Cheerios made of?

From the Cheerios Homepage that lists the information and history of Cheerios, this is the ingredient list for regular Cheerios: Calcium Carbonate, Iron and Zinc, Vitamin C, A B vitamin, Vitamin B6, Vitamin A, Vitamin B1, AB vitamin from folic acid, Vitamin B12, Vitamin D3, Whole grain oats, Cornstarch, Sugar, Salt, Tripotassium Phosphate, Vitamin E.

How many calories in Honey Nut Cheerios?

When were Cheerios invented?

Cheerios were first sold on May 1, 1941. It was called CheeriOats at the time and was shortened to Cheerios in 1945 after a dispute with a competing cereal manufacturer with a similar product. The process that was used to create Kix in 1937 was the foundation for the original Cheerios cereal. General Mills created and developed the cereal and they still manufacture it today.

How much sugar in Honey Nut Cheerios?

There is 33g of sugar in every 100 grams of Honey Nut Cheerios.

There are 80g of carbohydrates in every 100 grams of Honey Nut Cheerios.

Where are Cheerios made?

The oats are cleaned and turned into oat flour in Minneapolis, Minnesota before they are shipped to Cheerios factories in Iowa, Georgia, and Buffalo, New York.

Which Cheerios are Gluten-Free?

How many flavors of Cheerios are there?

There are 25 different Cheerios Flavors.