This is one of the most popular cheerios varieties, and you have probably had it many times in your life. If you have never tried this sweet and sugary version of the more plain original product, you will fall in love right away. There is something really wonderful about the sweet and classic taste of this yummy cereal, and people who love Cheerios think of this like the improved version of the original cereal product.

This is only one of many variations of the Cheerios brand, and they make seasonal products as well as their standard offerings. Honey Nut Cheerios are on shelves all year long, unlike some of the other varieties of this cereal, so if it is your favorite, you never have to go without. If you want to learn some more about this very well-known cereal option, you need to keep reading!

Cheerios were one of the first cereals made to be fun to eat. This product was supposed to relieve the bleak landscape of breakfast mush that had become the normal breakfast during the depression era. Things like Wheaties and Corn Flakes existed in their infancy at this time, but they were far from flavorful, and most people only ate them because they were affordable. Cheerios were supposed to be fun and flavorful but also better for you than the other cereal options on the market at this time.

By the time other varieties of cereal were added to the Cheerios lineup, it was well on its way to being hugely popular. People loved the fun shape of the cereal, and its flavor was so much better than most of its competitors. Cheerios were also an instant hit with parents because kids were willing to eat them without complaint. It has never been easy to feed small children, and any product that kids will eat without complaint is sure to be a hit.

More than 500 different recipes were tried before Cheerios was born in the form that we all know and love today. This included testing different shapes for flavor and enjoyment while being eaten, and there were some different selections made along the way to preserve the freshness of the product and to make it easy to create in high volumes. The O shape that we all know was easy to pack into boxes, and it was durable when shipped and stored.

The Honey Nut Cheerios product was originally added to the Cheerios lineup in 1979. It was the brainchild of Yandel Gonzalez, working with General Mills to create new and exciting cereal varieties. The original product was actually made with nuts until 2006. This seems crazy to most people, but it really is the case. Today, the flavoring comes from peach and apricot pits instead.

Cheerios have always been associated with really good cross-marketing campaigns, and General Mills has always been sure to associate their products with other things that kids love, like cartoons or superheroes. Honey Nut Cheerios are a bit unique within the lineup of General Mills cereals in that they did not have their own mascot for a long time. They were just sold as an offshoot of the original product without that much fanfare.

The flavor of this version of the cereal was so good that it was likely the sole reason for the early success of the product since the advertising support and other marketing efforts by General Mills were not exemplary. This version of the cereal has gotten much more attention in recent years since it has been one of the best-selling products that General Mills manages even today.

As of 2011, this was the best-selling cereal in the US, which is why it is unlikely that anyone living in the US has never tried it. This was the third creation in the Cheerios lineup, and it followed Cinnamon Nut Cheerios that were marketed in 1976. There are other variants like Maple Cheerios, Chocolate Cheerios, Blueberry Cheerios, Multigrain Cheerios, and more. Honey Nut is still more popular than all of the other versions of this product.

Cheerios have always been associated with healthy eating. The original NASCAR advertising and Baskin-Robbins advertising series were aimed at making it clear that Cheerios and all the variations of this product were good for your heart and for your overall health. This has led to some problematic claims over the years that General Mills has since rescinded, and certainly, all the sugary cereals that they added to the original product are not likely to be as healthy as they claimed back then.

The soluble fiber content of the original Cheerios product is still included in the Honey Nut version of the cereal. The difference between the healthier ingredients in the original product and the Honey Nut version is the sugars that are added to the Honey Nut product. That being said, part of the flavoring comes from healthy, natural sugars, so there are certainly worse cereal products as far as high levels of sugar. Honey Nut Cheerios state that they have 9.6 grams more sugar than the original product’s 1.2 grams per serving. The other sweeteners are sugar, brown sugar, and honey, so at least these are coming from natural sources and not artificial ones.

Claims About Help With Heart Health

Cheerios spent many of its early years claiming that the recipe they were using could lower your bad cholesterol. This came to the attention of the FDA, and the company was warned that it would need to change the language of this claim or prove it. The claim was that Cheerios products could lower your cholesterol by as much as four percent in six weeks.

Cheerios could not prove this, and they then found out that even making claims that were backed by studies would place them in the same category as cholesterol-reducing drugs. The company backed away from this claim, and they instead now state that you can eat Cheerios as part of a healthy diet that can lower cholesterol and your risk of heart disease.

Cheerios are GMO-free, and they are gluten-free, which they are certified to say. This was the focus of the company in 2014, and they were able to claim at this time that they would no longer make their products with GMO ingredients. This effort has also had some snags along the way, but at least the company is making an effort, and they have seen increased sales due to this effort on behalf of consumers. There are few cereal companies that are focused on these kinds of efforts, and this might be another good reason to choose Cheerios or Honey Nut Cheerios for your daily breakfast needs. 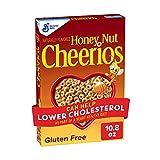 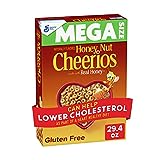 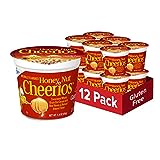 The General Mills company states loud and clear that this product is made with real honey and that it is gluten-free. Each box shows this information clearly on the front so that you are aware of the benefits of your choice.

Cheerios is unique among cereal companies as well because they make it clear on each box that they add vitamins and minerals to every cereal that they make. Honey Nut Cheerios include calcium, carbonate, zinc and iron, vitamin C, AB Vitamin, and Vitamin B in three forms, Vitamin A, folic acid, and Vitamin D. These are all the kinds of vitamins that you would find in a daily vitamin which is really helpful if you are trying to keep up on your daily nutritional needs. Many children do not get the dietary support that they need, and cereals like Honey Nut Cheerios help them to get the vitamins that they would otherwise miss out on in their daily diet.

Because this product was not advertised extensively until its mascot was created, there are few ads that are as old as the original Cheerios ads. You will find that most of these ads already include a big focus on BuzzBee and his chipper and happy presentation. There is something delightful about BuzzBee, and he really is endearing to those of all ages. This was one of the biggest reasons for brand recognition for the product going into the 80s and 90s, which was a stroke of cleverness on the part of the marketing team at General Mills.

A compilation of classic ads:

A new flavors ad that is fairly new:

How many calories in Honey Nut Cheerios?

How much sugar in Honey Nut Cheerios?

What is the nut in Honey Nut Cheerios?

There are no nuts in Honey Nut Cheerios.

How many carbs in Honey Nut Cheerios?

There is 10% carbs in Honey Nut Cheerios.

When were Honey Nut Cheerios invented?

Honey Nut Cheerios debuted in 1979. The cereal’s forebear, Cheerios, originally called Cheerioats, was born in 1941 and has a more favorable nutrition profile.

How much fiber is in Honey Nut Cheerios?

There is 11% fiber in Honey Nut Cheerios.