There is just something tasteful about a delicious glass of orange juice in the morning, or any time of day really. However, you also run into juices that will either be sour or too tart. Then, there is the pulp that bothers some people.

You don’t have to worry about any of that with a classic, refreshing drink that is orange juice but also incredibly bold and unique on its own. Sunny Delight, now known as Sunny D, is a timeless classic and it’s well worth a try if you’ve never had it before.

Learn more about Sunny D below!

Sunny Delight has been around for a lot of years. This flavorful drink was first marketed in 1963 as an orange drink. At the time it was originally produced, it came out as Sunny Delight. It remained that name for close to 40 years. In 2000, the brand updated a bit and at that time, they changed the name of the drink to Sunny D.

Many of us still affectionally call it Sunny Delight but the formal name since around year 2000 is actually Sunny D. It’s quippy, catchy, and slightly shorter to say so that works for us just fine. Initial production was primarily in Florida in the United States. However, as the product became more popular and new flavors were added, they expanded production to plants in Ohio and California. Both of those plants were established n the 1970s.

The original owners of the Sunny Delight brand were Doric Foods. They held ownership until about 1983, at which time Sundor Brands bought that company. Later, Proctor & Gamble bought Sundor Foods and with it they acquired Sunny Delight. As of 2004, Proctor & Gamble were reportedly making more than $450 million in revenue each year. Because of that, they actually created a spinoff brand to hold its own, which was Sunny Delight Beverages Company.

Sunny Delight has always been considered a healthier alternative to soft drinks but it really is not designed to be a healthy drink. It does have some nutrition and vitamins in it, the most noteworthy being a high source for Vitamin C.

Somewhere around 2000, the company rebranded to Sunny D and all products and gear were changed at that time. It has been Sunny D ever since that time. The name change never affected sales and this continues to be a highly popular product in several countries.

Some of the reasons behind the name change have been speculated to be drawn from controversy in the UK when some people who drank excessive amounts of the drink noticed their skin turning orange. They felt some major decreases in sales in the UK around that time. They did redesign the brand into Sunny D and adjusted their formula in an effort to bounce back from that fiasco.

The formula has changed other times in years since then but the brand continues to be popular and has added multiple new flavors over the years.

When Was Sunny Delight Invented?

This drink was first invented in 1963. There are no major stories or interesting histories to share in terms of invention of the drink. It was made as an orange drink alternative and often compared to orange juice. They are vastly different overall.

The invention credit goes to Doric Foods, who had a plant in Mount Dora, Florida when they created the drink. It was later sold to Sundor Brands about 20 years after its initial creation.

Sunny Delight now falls under their own subsidiary brand, which is Sunny Delight Beverages. This was established in 2005 thanks to revenues of more than $450 million in 2004. At the time, Proctor & Gamble were the owners of the brand. They continue to be the owner of the spinoff company as well. You will find that Keurig Dr. Pepper plays a role in distribution but they do not have ownership.

Prior to Proctor & Gamble ownership, the company changed hands a couple of time. The initial owners and creators of the drink were Doric Foods, which was located in Florida. They maintained ownership for 20 years until they sold the brand to Sundor Brands. Sundor Brands acquired all of Doric Foods in 1983, including Sunny Delight.

While Sunny Delight Beverages is the official owner, this brand is still owned by Proctor & Gamble, who acquired Sunny Delight in 1989.

How Did Sunny Delight Get its Name?

Unfortunately, we don’t really get a lot of back story with this brand. While they have quite a bit of history in their 60 years of business, there isn’t much personality behind where the drink was thought of or who came up with the name.

It was simply a product created by a food company. We can only assume the name Sunny Delight comes from the sunny disposition of the drink and the delight people feel when they take a sip. Seems like a logical explanation to us!

We also don’t know a lot about their name change to Sunny D. There are suspicions that the name change was to recover their reputation after some controversy in the UK but there is no concrete evidence to that determination. 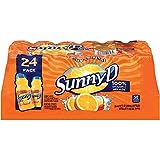 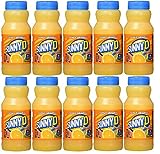 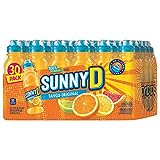 When Sunny Delight first came out, they were known for its bold flavor. They had only one flavor and it was orange. It was tasty and refreshing and continues to be one of their top flavors in the lineup. They have added some other flavors through the years. You can find some seasonal options as well as some options that have come and gone.

Orange will always be the original but here are the true names of flavors that are out there.

Some of these flavors are no longer available. Of course, your ability to find a specific flavor might depend on your location as well as whatever is popular and in distribution. What you are likely to find is that Tangy Original and Smooth Orange are the most common flavors and the easiest to find.

The top product of Sunny D has always been the large jug but they do sell individual drinks and other options as well.

Sunny D, formerly known as Sunny Delight, is a great choice for a bold and flavorful drink. It’s a good source of Vitamin C and has always been loved for its flavorful approach. They’re a longstanding beverage that has always given some of the top soft drinks a run for their money too.