Coca-Cola is the most consumed soft drink in the world, as well as one of the most recognized brands. In just about every part of the world, coca-cola is available and enormous amounts of the beverage are consumed daily.

Here is the complete story of Coca-Cola and how the company became one of the richest businesses in the world. Starting with how it was created and the ingenious marketing that made it a globally known brand.

The original Coca-Cola formula was created by a Pharmacist from Atlanta, Georgia named John Stith Pemberton. Although, making what would be the most consumed soft drink in the world wasn’t Pemberton’s intention.

Before Pemberton was a pharmacist, he fought for the Confederate army during the American Civil War. He reached the rank of Lieutenant Colonel and fought in the Battle of Columbus.

During the battle, John Pemberton was nearly killed by a sabor. This wound would lead to Pemberton to develop a morphine addiction to try and deal with his pain.

One of the first remedies that Pemberton made was “Dr. Tuggle’s Compound Syrup of Globe Flower.” A remedy that he marketed as a cure for multiple ailments from addiction to helping depressed and high strung women.

This remedy’s key ingredient was a venomous plant known as the buttonbush. After that remedy failed, Pemperton would then move to experimenting with the coca plant, wine, kola nut, and damiana.

Leading to the creation of “Pemberton’s French Wine Coca” that looked like it would be successful. Unfortunately temperance legislation was passed in Fuller County in 1886, which Atlanta Georgia is located in.

Pemberton would then have to make a non- alcoholic alternative for his French Wine.

Pemberton with the help of Atlanta drugstore owner Willis E. Venable, he began experimenting with different recipes. They would fail countless times trying to come up with a non-alcoholic drink he could promote as a health elixir.

One day, Pemberton accidentally mixed carbonated water with a base syrup. This would create a dark bubbling beverage that looked refreshing.

He would then begin experimenting on the recipe by adding the coca plant, kola nut, and sugar to sweeten the beverage.

Since it looked more like a beverage than an elixir, Pemberton would begin planning to sell it as a fountain drink. He would meet with his friend Frank Mason Robinson, who was a marketer and advertiser.

Pemberton showed Robinson his drink that he had named “Coca Kola.” Robinson suggested the name change to “Coca-Cola” that he believed looked better and was more marketable.

Shortly after creating Coca-Cola, Pemberton would develop stomach cancer and become gravely ill. He was impoverished during his last days, which would lead him to sell the recipe and rights to Coca-Cola.

Another pharmacist from Atlanta named Asa Griggs Candler would buy the proprietary rights of Coca-Cola from John and his son Charlie. Acquiring the rights to the beverage for a total of $2300.

Once Candler took over as the owner of Coca-Cola, he started mass production in 1890. Making over 9,000 gallons of syrup in 1890 and in 1893 registered the trademark patent for Coca-Cola.

The beverage became wildly popular in Georgia, which led Coca-Cola to be sold nationwide within the decade. Candler strategically began opening syrup plants in every part of the country from Dallas, Los Angeles, and Philadelphia.

While Asa Griggs Candler was the owner of Coca-Cola, he made a grave business mistake that drastically affected distribution. Two entrepreneurs from Tennessee named Benjamin F. Thomas and Joseph B. Whitehead came to Griggs with the proposition of bottling Coca-Cola.

Griggs was so enamored with the idea of bottling Coca-Cola in mass that he signed a horrible contract with the Tennessee entrepreneurs. He sold them the rights to bottle his product in mass for just $1.(That he never collected.)

This loosely termed contract would create problems for the future owners of Coke. Thomas and Whitehead were the owners of the beverage’s bottling process and  subcontracted the process out to other  bottling companies.

One of the big problems in the contract was that it specified a fixed price for the drink at 5 cents a bottle. This price would stay from 1886 to 1959 until future owners were able to restructure the original contract.

After nearly 30 years of owning the Coca-Cola Company, Asa Griggs Candler would sell the rights to the company. Selling the company to a group of investors led by Atlanta businessman Ernest Woodruff in 1919 for $25 million dollars.

Woodruff would appoint his son Robert Winship Woodruff as the president and chairman of the company in 1923. A title that Robert would hold for more than 3 decades until 1955.

Right after Woodruff’s group bought the rights to Coca-Cola, prohibition went into effect in the US. The owners of Coke would quickly take advantage of this to grow the company.

Coca-Cola was advertised as a non-alcoholic alternative during prohibition that the whole family could enjoy. In the late 1920s, they began selling Coke in six packs of their bottles, so families could enjoy the beverage together.

Coca-Cola would also go international during the 1920s thanks to being a sponsor of the 1928 Olympic Games. Different Olympic teams from around the world were able to drink Coke, which helped the brand expand its reach across the world.

By the time World War 2 began, Coca-Cola was bottled in 44 countries around the world. They really upped production during the war and distributed millions of bottles to soldiers fighting across the world.

In 1944, Coca-Cola would reach a milestone of making their one billionth gallon bottled 58 years after being created. By the end of World War 2 over 5 billion bottles of Coca-Cola were consumed by American servicemen alone.

Billions more were consumed by everyone else around the world, which gave the company even more wealth and power.

During this time, they also began advertising “Coke” as a shorter name for the drink and trademarked the name. 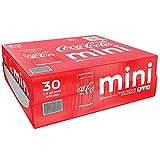 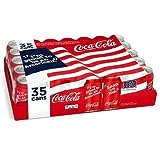 After 50 years of production, the Coca-Cola Company began buying other beverage companies and products. Here are some of the most notable purchases and other beverages that they created.

Fanta was created in Nazi Germany in 1940, when the US enacted a trade embargo on the country. Prohibiting the sale of Coca-Cola in the country until after WW2 ended.

When the war ended, Coke bought Fanta in 1946 and would go on to produce 150 flavors worldwide.

While it wasn’t a new product, Coca-Cola would introduce Coke cans in 1955. They became incredibly popular and were less expensive than glass bottles that were solely used the 70 years prior.

Sprite was introduced in 1961 as the company’s first lemon-lime beverage. This soft drink has been one of the Coke company’s top sellers for the last 60 years.

Coca-Cola would buy the juice company Minute Maid in 1960. A move that would thrust them into the citrus juice market and go on to produce hundreds of juice products.

Tab was the Coca-Cola company’s first ever sugar free diet soft drink that Coke created in 1963. It was quite popular for a few decades, but has since fallen out of fashion.

Diet Coke was introduced in 1982 as a low calorie sugar free alternative to the original drink. Within the US particularly, Diet Coke has been a top seller since it debuted.

One of the biggest missteps by Coke was introducing “New Coke” in 1985. A Coke with a new formula that was clear instead of the dark brown color that people recognized.

Coca-Cola faced severe backlash and within the year had brought back the original formula advertising it as “Coca-Cola Classic.” Since then the company has never tried to change the drink’s formula.

Plastic Coke bottles made of partially recycled plastics were introduced in 1992. Like the aluminum cans, the plastic bottles were more cost efficient to make and bottle than glass. Leading to them being one of the most produced Coke containers along with the cans.

Coca-Cola Zero was introduced in 2005 and contained no calories or sugar, while tasting like normal Coke. It is still sold internationally throughout the world.

The thing that made Coca-Cola explode in popularity was their impeccable advertisement. From the time Frank Mason Robinson suggested the name Coca-Cola, the name caught the eye of the public.

Its trademark red base with white lettering became an iconic logo that instantly became synonymous with America. Thanks in part to numerous highly successful advertising campaigns that would make the company worth billions of dollars.

Coca-Cola has had over 136 years of advertisement campaigns, which include:

Coca-Cola and the Coca Leaf

One of the stigmas around Coca-Cola comes from one of its original ingredients, the coca leaf. The same plant that is used to make the drug cocaine.

Many wondered if cocaine was in the original formula and there were actually trace amounts in the drink. Although the formula was slightly altered in 1903 and the small amount of cocaine was removed from the drink.

The coca-leaf is still one of the drink’s main ingredients, but they extract the cocaine substance from the leaves during production.

Today, Coke is produced in over 200 countries and a massive 1.9 billion servings are drunk daily worldwide. Making it the most popular drink in the world next to water, coffee, and tea.

The Coca-Cola Company is a publicly listed company meaning that there is not just one single owner. The company is in fact owned by thousands of shareholders and investors around the world. The largest shareholder of the company is American billionaire Warren Buffett.

When was Coca-Cola invented?

Coca-Cola was invented on the 29th of January 1892 in Atlanta, Georgia in the United States.

John Stith Pemberton was the inventor of Coca-Cola.

What does Coca-Cola own?

How much caffeine in Coca-Cola?

There is 8mg of caffeine in every 100grams of Coca-Cola.

How much is Coca-Cola worth?

The brand retains the title of world’s most valuable and strongest soft drink brand, with a brand value of $33.2bn – almost double that of second place Pepsi at $18.4bn.

Who is the CEO of Coca-Cola?

What is Coca-Cola made of?

Where is Coca-Cola made?

Today, that extract is prepared at a Stepan Company plant in Maywood, New Jersey, the only manufacturing plant authorized by the federal government to import and process coca leaves, which it obtains from Peru and Bolivia.

How did Coca-Cola get its name?

When launched, Coca-Cola’s two key ingredients were cocaine and caffeine. The cocaine was derived from the coca leaf and the caffeine from kola nut (also spelled “cola nut” at the time), leading to the name Coca-Cola.