The Zero Bar is a candy bar that is made by The Hershey Company. It features a combination of caramel and almond nougat as well as peanuts. The entire bar is covered in white chocolate fudge. This is a unique candy treat that not everyone has experienced, but the candy has been around for almost 100 years now!

Zero Bars have been around since 1920 and are still popular today. If you have never experienced this delightful candy treat, you need to learn more about how this candy bar came to be and possibly head out to get one so that you can give this treat a try!

The Zero bar was made and launched by a Hollywood Brands company from Minnesota in 1920. It was originally called the “Double Zero Bar” but was renamed the “Zero Bar” in 1934. The original name was intended to communicate that the bar was cool even at low temperature but it might also have referred to the stark white exterior of the bar that reminded people of snow.

The original marketing of the Zero Bar was done in Illinois where the first factory was located. Hollywood Brands was sold to Consolidated Foods Corporation in 1967 and this company later became Sara Lee. The Zero Bar brand again changed hands in 1988 when Huhtamaki Oyj bought the company and renamed it Leaf Inc.

Hollywood Brands was a big name in the candy business at the time that the Zero Bar was gaining in popularity and they made other really clever candy bars like the Milkshake candy bar and Payday bar. Their colorful and cartoonish branding was attractive to kids and made sure that the company got noticed.

Children in the 60s would have considered Hollywood Brands a household name and there are many whose fond candy enjoyment memories are centered around being able to buy Zero Bar, Payday, and the Milkshake and Butternut bars that the company marketed. This is particularly true of those who grew up in the Pennsylvania and Chicago areas.

The Zero bar would have been sold in the summer in great numbers because the fudge exterior was less likely to melt in hot weather. You have to remember that there would not have been air conditioning in homes or in stores at this time, so chocolate treats were a rarity in the hot parts of the year. The Zero Bar filled this niche and its association with snow and the cold was probably a very successful marketing choice at the time that the bar first came out.

Hershey Foods Corporation took over the Leaf Inc company in 1996 and is still the owner of the Zero Bar brand today. While the branding has changed somewhat over time and the Milkshake and Butternut varieties have not stood up to the test of time, people who loved Zero Bar in the 60s can still enjoy them today. Hershey has not changed the packaging of the Zero Bar much since they took over the brand and the vibe of this unique candy bar is still true to its origins.

How is Zero Bar Sold?

You can get Zero Bar on Amazon as well as through Dollar General and in some gas station locations. The candy is also available online through other merchants like Walmart, Walgreens, and Target.

The Hershey company states that the Zero Bar has a very loyal following and that they have continued to make this bar due to the demand from this group. It is a bit of a cult favorite, but most of the buyers for this candy bar are centered near its original sales region in Illinois and Pennsylvania. There have been a lot of online reviews lately made by YouTubers, so it is possible that the candy bar will enjoy a new spike in popularity.

This information was taken from a listing for the King Size Bar on the Hersheyland website.

While Zero Bar and Payday both have loyal followings, they are not that similar in taste. The Payday bar is made with a nougat center that is caramel flavored. This candy center is then rolled in whole peanuts. The bar is salty and crispy and was originally marketed as a meal replacement, rather like some of the Snickers bar advertising strategies.

Zero Bar is more like Snicker than Payday is, but the two bars are not that much alike in flavor or texture. Zero Bar is more like the discontinued Milkshake and Butternut varieties that were developed by the Hollywood Brands Company. This is not a typical kind of candy bar by today’s standards and Zero Bar offers a little window into the tastes and popular candy-making trends of the 1920s and 1930s that you cannot get from other candy brands that are still making products today.

While there are lots of candy bars with chocolate on the outside, fudge coating is not common anymore. Likewise, the Payday bar with its exterior layer of whole peanuts is a unique candy creation that does not have many competitors.

The Hershey Company has not strayed from the original Zero packaging design and the same silver wrapper with white lettering and blue accents adorns all sizes of this candy bar. The original sensibility of the candy company has been retained and those who were around to buy them when they were new will still recognize this candy when they buy it.

The sweets that were sold in the early days of the company were labeled with a promise of a prize of a steam engine toy if the company received ten wrappers and 15 cents. While this information is no longer on the wrappers, the rest of the overall branding looks very much the same. Over the years the wrappers have shown polar bears and there have been space-themed packaging choices as well.

This is one of the special things that Hershey has done for the brand to honor its history and stay true to the original messaging and branding of the Zero Bar. There are not many companies that would offer this level of care to their acquisitions and Hershey has done a great job managing this historic brand.

The Hershey company has stated that Zero Bars should actually be referred to with all caps in the title. The correct representation of this candy bar is actually “ZERO BAR” when advertised. While they are not clear about why this is the way that they prefer to have the candy bar name represented, most merchants honor this condition and the candy bar name will show up online all in caps per this request.

This is a very polarizing candy bar. Some people adore it and others really dislike it. It is often described as a white chocolate Snickers although the Zero Bar was around for a decade before Snickers was created.

For the people who do not like the taste of this candy bar, there are complaints about the hardness of the bar and the strangeness of the white chocolate fudge on the outside of it. The same complaints exist about Pay Day Candy Bar, but both bars continue to sell very well.

These are certified kosher candy, which is fairly unusual in the candy space and they offer up something for everyone who likes sweets that have nuts in them as well as enjoying chocolate bars with a bit of caramel goodness.

The wrappers of the original candy were intended to communicate that the bar would not melt when you were carrying it around. As a result, there were many references to the cold, to snow, and to the arctic on each bar.

The main slogan for the Zero Bar was “Mighty Good Candy” which was displayed prominently under the large “Zero” in the middle of the wrapper.

Another slogan used to market this candy bar was, “as cool as zero degrees”. During the time of this marketing ploy, the bars were often sold frozen. 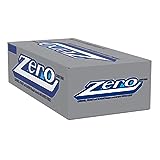 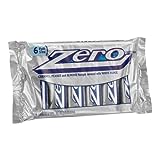 You can also buy Zero Bars at Old Time Candy by clicking the image below.

This is a recent Zero bar review and ad:

Here is a recipe to make a Zero Candy Bar Ice Cream Treat:

What is a Zero Bar?

The ZERO candy bar, introduced in 1920, is a candy bar composed of a combination of caramel, peanut and almond nougat covered with a layer of white chocolate fudge.