This is one of the oldest chocolate bar recipes in the Nestle stable of products, and it has been popular in the UK since the 30s. The Aero Chocolate Bar is also sold in many other markets but remains most popular in the UK. This is a really unique candy bar that is made to be “bubbly” in nature.

There are many flavors of this candy bar, although not all of them are sold in every market. If you like crunchy or crackly candies, you will love this candy bar. There are few ways to make simple candy bars really unique, but the texture of this candy bar makes it stand out from the crowd.

The original reason that the Aero Chocolate Bar was invented was to try to take back some of the market share for chocolate bars that had been grabbed successfully by Cadbury’s Dairy Milk. Rowntree was selling many chocolate bars in the early 1930s that were not able to keep up with the sales of the Cadbury Dairy Milk Bar. Chocolate products were gaining in popularity at this time, but they still suffered from the ailment of all chocolate products that limited sales in the summer. When the hot weather rolled around, chocolate bars were hard to keep fresh and to sell to customers, which meant that chocolate marketing enjoyed its peak in the winter months.

It is possible that the original design of the Aero was not so much about texture as it was about exploring the possibility that the candy bar would be less likely to melt if it was made with aerated chocolate. The happy outcome of these experiments was the delightful Aero bar, which offers a lot of enjoyable texture even if this does not make the bars any less likely to melt in hot weather. In fact, in the heat wave in July 1983 in the UK, Aero bars all over the city melted and lost their aerated spaces due to the severity of the weather.

The process of making the “bubbly” texture of the Aero chocolate bar was actually patented in 1935 in New York by Rowntree’s. The process is done by heating the chocolate and pouring it into molds, then aerating it to make small bubbles. When the chocolate cools, it expands the bubbles to fill up the space more fully within the candy bar. The bars are shaken to make them even in size, but the aerated bubbles remain to create the unique texture of the Aero bar.

In late 1935, the Aero Chocolate Bar was launched in the UK by Rowntree’s. The Peppermint Aero was made next and was first sold in the UK in 1959. These bars were very popular almost right away. The regular bar was wrapped in a brown wrapper. The mint version was sold in a green wrapper. The television ads began to run in 1950 with the slogan, “Lovely, bubbly, Aero bar!”

The original slogan was “Hold on tight, or I’ll fly away!” which was listed on every bar beneath the AERO banner. This style of packaging was used until 2014, when the packaging was retired in favor of the “reminiscence pack”, which was targeted at helping those with Alzheimer’s to recall memories. There was also a reboot of the 1953 Queen’s coronation livery that the candy had worn for that year only.

Production of Aero chocolate bars was halted during World War II, and then the bars were relaunched in the 1950s. The original campaign that brought the bars back to market actually focused on how the chocolate was lighter and less caloric, and the marketing was mostly at women. “Aero girls” sold the bars in ads, and the slogan that was used was, “Different…for her, Aero – the milk chocolate that’s different!” This slogan and marketing campaign was short-lived, but it is an interesting moment in the Aero chocolate bar’s history, and it did coincide with some other American products that also claimed to be made for dieting women trying to keep their figure.

In Brazil, the candy bar brand goes by the name Suflair and was launched through a subsidiary in 2014. In Hungary, the bars are called Boci Aero, and in the Netherlands, it is called Bros. South Africa sells the bar under the Aero name, and the White Aero and Cappuccino Aero are the most popular there. In the US, the Aero bar is only sold by some specialty candy shops since its 1970s release was not a commercial success. The Hershey’s Air Delight was sold for a brief time as well, which was essentially the same candy bar, but it also was discontinued.

Ukraine began making Aero Bars in 2004, and in Germany, the candy company Trumpf makes Aero bars under license. In Germany, the bars are solid white or milk chocolate that are foamed up with carbon dioxide, but there is no filling inside the bars. The Aero chocolate bar that you buy in Germany will not be much like an Aero bar that you purchase elsewhere.

Aero Chocolate Bars were made in Australia from the 1970s until 1996, and then in 1996, the bars were made in Britain. The British makers that currently craft the bars use the old British recipe, but Australian makers have always used a different recipe that is creamier in nature. 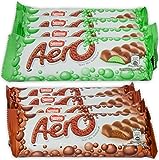 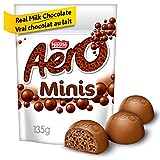 As of 2012, nestle made an effort to remove artificial colors and preservatives from all of its products, including the Aero bar varieties. This means that these ingredients were replaced with plant extracts.

The Aero Biscuit was a product that was introduced on the 4th of May, 2011. The Aero Biscuit is made with a classic flavor of Aero chocolate and round pieces of biscuits. This product is sold in the UK and Ireland. It comes in these flavors:

There is also an Aero Mousse product that was first made in 1998. It started being sold in Australia in 2001, and the range of flavors sold in the UK was expanded in 2008 to add Mint and Choc. There is also a dessert sharing product in the lineup that was released as a premium mousse in 2017. The Aero Mousse bar was launched in 2015, and it is a chocolate mousse filling with an exterior chocolate shell. There is also Aero ice cream that comes in various flavors and Aero drinks that are sold in the UK. Aero also makes a bubbly chocolate drink mix that is used to make fun hot chocolate flavors.

Each year various seasonal varieties are released that are usually retired after the season has closed. The kinds of products and their names vary from market to market, but often the most interesting and varied of these treats are made and sold around Easter each year. Christmas usually heralds the arrival of a classic candy bar with Christmas-time flavors and coloring as well.

From the HEB site entry for the original Aero chocolate bar:

Various of the other flavors and products in the line of Aero bars, candies, mousses, and ice creams will have additional ingredients or different recipes. There are also various different food allergen warnings that can be associated with the various Aero products. There are so many Aero products that there is no way to summarize the ingredients for all of them in one location, so those with food allergies need to check out the packaging of the various items to be sure they are safe.