Cadbury Dairy Milk is chocolate admired by millions of people all around the world. Chocolate is manufactured under the Cadbury brand. Chocolate has been ranked as the leading chocolate bar in the UK since 2014 and has kept its position since then. This sweet and creamy milk chocolate taste with a hint of crunchiness will eventually make everybody crave it. We have to thank George Cadbury Junior for creating this iconic treat.

The History Of Cadbury Dairy Milk

Everything started when John Cadbury started to sell tea and drink chocolate in 1824. Soon after, in 1831, he managed to start the production of cocoa and even opened a factory in Bridge Street, England. In 1847, John and his brothers partnered and started a company that we all know and love today, company was originally called “Cadbury Brothers.”

After the death of John Cadbury, his two sons continued to run the business. However, things were not going well. The company started to lose money. Still, it managed to regain its height, and by the year 1866, the company’s production shifted. Eventually, the brothers managed to start chocolate production and introduce higher-quality cocoa. The candy bar became one of the most famous treats of 1914.

The first major invention of the Cadbury brothers was the Dairy Milk Bar. George Cadbury Junior was the developer of this chocolate candy.  The innovation in this product was that the proportions of milk used were much higher than in any other chocolate.

Cadbury Dairy Milk Chocolate first appeared in 1905 and was introduced in the United Kingdom. Dairy Milk consisted of several products made with milk chocolate. The brand is manufactured by Hershey’s company in the United States and has the license of manufacture from Cadbury. Chocolate candies are available worldwide, including in China, India, Sri Lanka, Pakistan, Bangladesh, and Kazakhstan.

The Cadbury brand of chocolate is one of the most loved and cherished in India. There, it was first introduced in 1948. However, it did not become popular right away. Cadbury Dairy Milk’s popularity era started in the 1990s with the popular campaign. The advertisement depicts a girl dancing in the field while holding a Cadbury chocolate bar. Since its appearance, the people of India have fallen in love with this treat, which remains to be one of the most popular treats.

The British Cadbury Dairy Milk chocolate bar is mainly made with milk, sugar, cocoa, cocoa butter, emulsifier, and vegetable oil. The American version of the candy is a little different and mainly consists of sugar, lactose, soy lecithin, and artificial flavorings.

The very first Cadbury dairy milk was created in 1905 in Birmingham, England. In the Cadbury Dairy Milk Line, the new versions of chocolate were introduced in 1926. The additions were “fruit and nuts,” and the bar had raisins and almonds. Another product of Cadbury Dairy Milk was introduced in the 1930s, and it was called “Whole Nut”, presented with hazelnuts. New variations included “Dairy Milk Silk,” which had a Turkish delight center and was covered in milk chocolate.

In the 1930s, the brand became the leading chocolate manufacturer in the United Kingdom and kept the position for more than a century. In 2020, dairy milk became the second best-selling product. The first place was taken by McVitie’s chocolate digestive biscuits. In 2014, the brand launched the Dairy Milk Ritz. This particular bar included Ritz Crackers, which had a unique salty taste and texture.

In the year 1015, a new bar called Vegemite was launched. This particular product had a good amount of milk chocolate, caramel, and vegemite. The product was launched in Australia. In 2010, the shape of the candy bar was changed and it was given a more circular shape. This caused a reduction in the bar weight. In 2015, the brand announced that new changes were about to come. This time, they promised to create a healthier version of the chocolate bar with 33% less sugar.

Soon after its release, Cadbury dairy milk became the best-selling product of its time. It was sometimes referred to as Highland Milk, Jersey, or Dairy Maid. The origin of the name is not known. However, the brand states that it was the customer’s daughter who came up with the name idea.

Cadbury Dairy Milk introduced the new slogan “glass and a half” as part of an advertising campaign. The slogan was first used in 1928 to underline the higher content of milk in the chocolate bar. One of the most successful advertisements for Cadbury Dairy Milk was launched on television in the 1970s. It was aired with the tagline “Nuts, whole hazelnuts. Ooh! Cadbury’s taken them and then covered them in chocolate. “

A new campaign was launched in 2007 and it was entitled Gorilla. The newly presented tagline was “Glass and a half-full production”. In an advertisement, Gorilla was seen with a drum kit. The gorilla was drumming along with Phil Collins. The song “In the air tonight” was playing alongside the advertisement. This campaign was aired during the season finale of Big Brother 2007. This campaign became pretty popular and had more than 20 million views on YouTube.

Gorilla Advertising was relaunched in 2008. This time, the soundtrack was changed to “Total Eclipse of the Heart.” This was used to reference online mash-ups of these particular commercials.

In 2008, a second large advertisement campaign was held. This time the campaign was mainly around the tagline of “glass and a half-full production”. The advertisement featured trucks that were racing at night on the airport runway. This particular advertisement had a soundtrack to the tune of “Don’t stop me now.” An interesting fact is that there was a record label launched as part of the promotional campaign for Cadbury Dairy Milk. One of the songs that were released was Zingolo. The song was about the Fairtrade Dairy ilk.

The original packaging of Cadbury chocolate was introduced in 1914 and was a tribute to Queen Victoria. Later on, purple chocolate bar wrappers became a symbol of the brand. Cadbury received a trademark for the purple color in 2007. However, it was canceled by the court. The “Glass and a half” tagline was the main representation of the brand. Eventually, in 1986, the symbol of this tagline appeared on the Irish Dairy Milk packaging.

Cadbury tries to adjust and adapt the taste of their product to the local customer’s wishes and tastes. That is why Cadbury USA has modified its recipe and is more akin to a Hershey Bar. 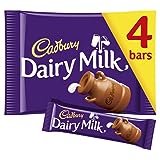 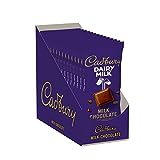 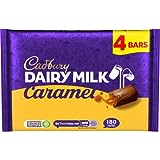 The Cadbury brand and its products have been on the market for more than a century now. The Cadbury Dairy Milk chocolate bar has remained a popular treat for millions of people. The candy brand remains one of the most popular chocolate bars today.

It is impossible to not fall in love with the creamy texture of the sweet treat with milk chocolate flavor. This chocolate bar can truly steal the hearts of people all around the world.