This is one of the most distinctive and popular candies on the market and almost everyone knows what this little treat tastes like. There are not many confectionary items that can match a Butterfinger bar when it comes to taste and crunchiness all rolled into one. This has long been a favorite candy bar of people of all ages but most people don’t know the history of this yummy treat.

If you have ever wondered how Butterfinger came to be or how long it’s been around, you can learn about these items and more by reading on. There is no shortage of fun facts about this candy bar that will make you realize that Butterfinger has a much more exciting past than you probably realized.

History of the Butterfinger Bar

This candy was invented in 1923 by Mr. Otto Schnering. He was the founder of the Curtiss Candy Company which was located near Chicago, IL. The company held a candy naming contest for the new candy and Butterfinger was the winning result of this campaign.

As part of the marketing campaign for this new candy, Butterfinger bars and Babe Ruth candy were dropped from airplanes in cities that had been selected before the campaign. This was done all over the US and it really helped launch Butterfinger into the public eye as you can imagine. Butterfinger also got connected with Shirley Temple in 1934 due to her film Baby Take a Bow.

In 1964, the Curtiss Candy Company was sold to Standard Brands Inc. by 1981, it had merged with Nabisco. In 1988, the candy was sold again to Kohlberg Kravis Roberts & Co. This was the largest buyout in history at the time, and by February of 1990, Nestle had purchased Baby Ruth and Butterfinger. At this time, Nestle earns the highest revenues of any food company in the world.

Nestle quickly launched a hugely memorable ad campaign for the candy which featured The Simpsons characters. The same characters were then used to market the new Butterfinger BBs. This highly successful ad campaign took a hiatus in 2001 but came back in 2010.

Butterfinger generated sales of $598 million in 2010 and was ranked as one of the most popular candy bars in the world from 2007 to 2010. Nestle then sold the candy to Ferrero SPA for $2.8 billion in 2018. The company still retains ownership of the candy and had changed the recipe.

The Ferrero company announced in 2019 that they were going to improve or change the recipe to make a “better Butterfinger” bar. They also used this statement in ads for the candy. The changes include alterations to roasting processes for the peanuts that make the flaky center core of the candy and increased percentages of cocoa and milk in the chocolate that coats the outside of the bars.

There have been mixed reactions to the improved recipe but Ferrero insists that their sales have increased since the change.

There are a few varieties of this popular candy, some of the harder to find than others. You will mostly find the candy bars when you go shopping for this treat but some areas still see some of the more unique versions on shelves.

Some of these candy options are no longer sold unless limited editions are brought back onto the market and you might have to order your naked bars or cocoa mix online to be able to access it. Not every area sells the same Butterfinger products but the classic bars and the BBs are almost always sold in people’s local areas. These candy varieties are quite common in movie theaters as well, although you will probably not see some of the more unusual bars there. 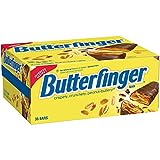 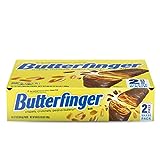 From the Amazon entry for a single bar sold in a 36-pack:

The original naming competition that led to the famous name was one of many really creative advertising stunts to promote the candy and the name was coined due to a recent sportscasting statement that was leveled at baseball players who dropped the ball. The man who won the contest proclaimed that he was a butterfingers and that that had inspired him to send in the name. Many people are not aware that the original name of this candy was really a nod to a sportscaster insult that baseball players probably hated to have to hear leveled at them.

The companies that have owned Butterfinger have also been creative over the years with slogans and other added marketing ideas. There was the countdown to the end of the world that was named BARmageddon and this included a crop circle in the shape of a QR code. There was also a Butterfinger the 13th comedy-horror movie that was made and an interactive graphic novel that created and promoted the Butterfinger Defense League.

The companies that have managed this candy have also cashed in on many fun April Fool’s day pranks like one where they pretended they were renaming the candy to, “The Finger”. This was criticized as being poorly executed but it was memorable and the company responded by creating the “Butterfinger Comedy Network” site to send visitors who had cracked the code to look at the products and read about the prank.

The “Nobody Better Lay a Finger on My Butterfinger” campaign has been by far the most successful of the slogans and ad materials for this candy bar and most people are aware of the slogan even if they never saw the Bart Simpson ads that first made it popular.

There have long been rumors that when the candy was first sold away from the Curtiss company, the recipe was lost. This was also supposedly true of the Baby Ruth bar. While the companies who have managed the classic candy bar have never fully confirmed this fact, it is possible that the candy bars that we all know and love today are not actually that similar to the original candy bar.

There were also rumors that the reimagined and refurbished recipe that Ferrero has claimed to have created is not nearly as good as the original recipe that has been popular for many years. This might not be true, but there are people who have jumped onto forums about candy to state that they do not like the new recipe nearly as much as the old one.

Butterfingers are a really unique candy bar. They have a typical chocolate coating on the outside but the interior bar is flaky and a little chewy as well as being buttery and having a note of peanut flavoring that is really unique. The naked bars offer you the chance to sample the interior of the bar without all the added chocolate which has made some people surprised to see how much the center of the bar impacts the overall taste of the treat.

This is a really unique candy as far as flavor and also texture goes and many people come back to this candy bar over and over again because there is just nothing else on the market that is quite like it. There are many candy bars that have tried to create the same taste and texture experience as what is offered by Butterfinger, but even the BBs maintain the right balance of flaky, chewy, and chocolatey goodness in ways that other candy bars really just can’t seem to get right.

What is in a Butterfinger?

Butterfinger is now made by Ferrero. The Butterfinger candy brand which had been owned by Nestle since 1990 was bought by Ferrero (the company behind Nutella) in January 2018.