Everyone on earth probably has tried out conversation hearts at Valentine’s Day and these chalky little treats with their messages is one of the staples of the holiday. Many people love these kinds of slightly-sweet candies Conversation Hearts are the most well-known of this genre of candy, especially in the United States. This is a little candy treat that has been long associated with the holiday of love, but they are actually also sold outside of Valentine’s Day run-up in some places as well.

If you have always loved these little Conversation Hearts candy but have wondered how they came to be, you are not alone! This is a candy that many people take for granted but that has a fun story behind its inception and creation. If you are wanting to know more about this Valentine’s Day candy staple, you should read on to learn more!

Necco Wafers and Conversation hearts were ultimately born of the lozenge candy movement of the 1800s. These candies were made for medicinal purposes in most cases and only later were adapted to be used for confectionery purposes.

These little heart candies are really called Sweethearts and they are little sugar candies that are sold in small boxes around Valentine’s Day. Each little candy conveys a sweet message like, “Miss You” or “Kiss Me”. The candy was originally made by the same confectionery company as the Necco Wafer. The Spangler candy company bought both products in 2018, but prior to that, they were also made by the Stark Candy company. Necco made about 8 billion of these little Sweethearts each year and they were sold under the branding of other companies like Brach’s as well.

In the UK, this candy is called Love Hearts but is essentially the same product. The unique little candy shapes and the cute sayings are key to the enjoyment of these little heart-shaped candies and the small boxes are perfect for kids to give to one another along with their paper valentines. These are staple candy for the holiday but you can sometimes buy them out of season as well through some suppliers.

When the Conversation Hearts were first made in 1847, Oliver Chase invented a machine that could cut lozenges that were a lot like Necco Wafers. The candy lozenges were the basis for his candy company and his brother began adding the clever little sayings to the wafers in 1866. The machine that was made to stamp the candies with the message was like a stamp and it was very successful at creating the same kinds of cute messaging that the candies are emblazoned with today.

The original messages were things like, “married in pink, he will take a drink” or “married in white, you have chosen right”. This early version of the candy was called “Sweethearts” and this was the name that they carried until 1901. The candy underwent a change at this time and other shapes were tried out like postcards, horseshoes, watches, and even baseballs. There were also added varieties like chocolates and sugar-free hearts.

In the 1990s, the sayings were updated to be more modern and things like, “Call me”, “Email me” and “Fax me” were added. The company continues to have to revise the sayings on the hearts as new slang comes into fashion and new romantic sayings come to be. Necco made the hearts year-round at this point and the production was stepped up in September to meet the demand for February.

The flavor was upgraded in 2010 and the candies were made softer and more enjoyable to chew. The new flavors added some sour flavor notes as well as things like sour apple, strawberry, and something called, “spring fresh”. Some fans really did not like these changes and in 2018, Necco actually declared bankruptcy. The original candy hearts plant was closed and the brand sold. Spangler bought the brand at this time and started making the candy treat again in 2020. The original flavors were returned to the boxes and the sayings were updated again to remove out-of-date slang and other items that no longer made sense.

There are some popular legends that state that the original candy heart candies were carried by Civil War soldiers. They would have been wafers with sayings at this time, but this is almost impossible to verify and there has been no indication that this is the case. What is true about the candies is that they were linked in their popularity with the rise of the Valentine’s Day card tradition which was popularized by Esther Howland of Boston. The little sayings were perfect for this kind of love confession and the candy hearts brand became synonymous for the first time with love declarations and the holiday of love.

There was a common game in Boston when the heart version of the Conversation Hearts candy was released that involved breaking the candy hearts in half and then providing one half to the girls at a party. The other half was hidden and men had to hunt for the halves that were missing. They would then find the right matching heart piece and use this discovery to start talking to the girl that held the other half of the heart.

As the candies grew smaller in size, more phrases were offered and many kids and teens used the hearts to make declarations of their feelings. The addition of slightly snarky and not inviting hearts were also used as a means to send a message to suitors that one did not welcome. When Spanish phrases were added, people besides English speakers could enjoy the fun of these little candy hearts more readily.

Not all of these varieties are sold year-round so you might not be able to find some of these more unique Conversation Hearts types when you are looking in the winter or the summer. Since the candy was just purchased by a new company, there might be changes to the way that it is sold and marketed in the future that could lead to new varieties or changes to the existing ones that are on the market at this time. 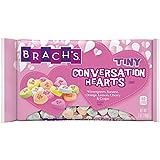 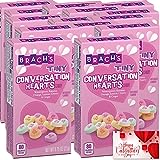 From the Amazon listing for Brach’s Tiny Conversation Hearts:

These are simple like candies and no, despite the popular legend, they are not actually made of chalk.

These are only a few of the sayings that have graced the candies over the years but they have always been changing to keep up with the sayings of each generation. You will find that some older boxes can have some really dated slang and phrases in them and some of the language used in the older boxes might not even make much sense to modern folks reading them.

There are currently mini conversation hearts, large conversation hearts, and the Brach’s version which is the most like the original candy before Necco sold the candies. Many of Brach’s versions will let you spell out phrases one letter at a time but do not include full sayings on the heart’s surfaces. The mini candies are made with short sayings and the larger hearts have more complicated messages on them since they are larger.

The candies are still sold in the same flavors as were popular from the beginning, and you will still get bags of candies that are green, white, yellow, orange, purple, and pink. The sour versions seem not to have made a comeback since the candy was released again, but it is early days so you might not see new versions for some time. Candy hearts were clamored for when they went off the market, so for those who love them, hopefully, they will be a big hit again and some new versions will be released.

There was a Twilight version of the candy hearts before Necco went out of business and these included, “Lion and Lamb”, “Bite me”, “Live 4 ever” and “I heart EC”. It is not clear if this version of the candies will make a comeback since this was such a niche market, even then. The versions that are released in the future might refer to other more current pop culture instead of this rather dated reference, even if the delightful candy heart phrase, “bite me” does have uses beyond this Twilight-themed reference.

Another candy hearts review of the various sizes: