Necco Wafers are one of the most unique candies on the market. They are a candy that has been around for a very long time and their simplicity has made them popular for years. This is a candy that has even survived bankruptcy to come back stronger than ever. This is a sweet that is not for everyone, but the people who love the taste and texture of these candies will tell you they are the best candies of all time.

If you have never tried this candy, you will want to pick up a roll of these treats and give them a shot. Remember that this is a really unique candy and it might have to grow on you a little bit. Or maybe it won’t but at least you have given Necco Wafers a try!

Necco Wafers are a really unique candy that is very simple. These are little discs of slightly chalky candy that are sold in rolls. They were first made in 1847 and they were the namesake and primary product made by the New England Confectionery Company (Necco). This company operated out of Boston and was the owner of the candy until 2018. The company went into bankruptcy at this time and Necco candies were not sold again until the Spangler Candy Company bought the product in 2020.

The traditional candy rolls were sold with eight flavors of wafers in them. Each roll contains lemon, lime, orange, clove, cinnamon, wintergreen, licorice, and chocolate. You can sometimes also pick up rolls that are all one flavor such as an entire roll of chocolate-flavored Neccos. The various different versions of these candies have fluctuated over the years so you might not be able to get a unique variety if it has been off the shelves for too long. Some of the unique varieties might not be back anytime soon.

The original candy was made by Oliver Chase in 1847. He invented the lozenge cutting machine that made the wafer shape of the candies possible. These were called hub wafers during the Civil War and Union soldiers actually carried them as they marched from place to place. The original candy company that Chase owned was then merged with the New England Confectionery Company to create the Necco company. By 1912, they were being sold at Necco Wafers rather than hub wafers.

The Necco wafer was also carried by soldiers during World War I. This was one of the few candy products that continued to be made during the conflict since they were so portable and could easily survive shipping over long distances. This is a treat that has been used by travelers to the North and South Pole as well as hikers heading up mountains like Everest. This is one of the most portable and durable food products around and there are many people who consider Necco Wafers to be a necessity in any survival pack.

Over time, the Necco candy wafer recipe was used to make other candy items that are perhaps more familiar to people today. Sweethearts are perhaps the most well-known of these spin-off candies. In Canada, a product called Canada Mints is made with this recipe as well. When the company went bankrupt, these other products were sold to the Spangler Company as well. The Spangler Company brought back the Sweethearts candies at the same time as the Necco Wafer products that gave them life.

In 2009, Necco’s recipe was changed. The artificial colors and the artificial flavors were removed from the recipe. The candy was also softened up with the addition of glycerin. The lime flavor was also removed due to issues with creating the lime color without the original artificial colors. The chocolate variety has been changed as well to a four-flavor chocolate roll. Long-term Necco Wafers fans complained about the change to the candy ever since but new customers were none the wiser since they have nothing to compare it to.

In response to the pressure and complaints from long-term customers, the change to the recipe was rolled back and the original formula was put back in place in 2011. The company has still been upfront that there were some changes that were not rolled back, mostly to the chocolate wafers. This change appears to be in the flavoring that is used, a change which is intended to make the chocolate wafers have more cocoa flavor than the traditional wafers.

There was a Tropical Necco Wafer roll launched in 2012 with flavors such as mango, banana, coconut, lime, and strawberry. The single-roll of original chocolate wafers has been added to the list of varieties of Necco Wafers as well. If you love sour things, the Necco Sour Wafer rolls will make you very happy. These wafers come in watermelon, wildberry grape, sour apple, lemon, extreme tangerine, and blue raspberry. There have been times when candy cane flavored Neccos were sold during the holiday season as well.

Many people use these sweets for gingerbread house making, first communion wafers, and even edible poker chips. They are a uniquely sturdy candy that can be trusted to handle all kinds of different uses that other candies would not hold up to. This should really be a surprise since these treats were sent to the North Pole and along with soldiers on the march. A lot of people will tell you that the current recipe reminds them most of fondant, the heavy and stiff frosting that is used to decorate wedding cakes. That being said, this is still a really classic candy that you should at least give a go if you have never tried them before.

The Necco brand has always kept things simple. The little wafers are rolled up in a thin paper wrapper that is clear enough to see the wafers through. The Necco logo has not changed in years and years and still appears the same way on the rolls that also still are created in the same way. The simplicity of the design has always been a big success for the company and Spangler has not changed the packaging in any major way either.

Each wrapper states that the candies have been made by 1847 and the rolls also proclaim, “the original candy wafer” along the length of the roll. The logo is in red and the lettering is in blue on all of the wrappers. Even the chocolate variety is wrapped in this same style of wrapper. The color of the rolls makes the chocolate packaging appear to be a different color in some cases, but this is just because the candies are visible through the wrapper.

This is one of those candies that you unroll and there is a little puff of sugary dust that always comes out of the roll when you tear it open. You can enjoy these candies a bit like Life Savers Candy where the candies stay inside the paper roll until you want to eat them. This makes them an ideal candy for those who do not want to feel forced to eat the whole roll all at once. Due to the nature of the Necco recipe, the candies really don’t seem to go stale either, even when the roll is unwrapped. 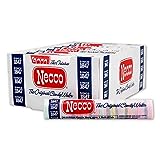 You can also buy Necco Wafers at Old Time Candy by clicking the image below.

Not all of the various flavors of the Necco candy are available at all times of the year. Some markets might never get access to some of these more unique varieties of this candy. You might have to shop online if you want to get some of the more unique flavors to try. There are various sellers that can provide you with access to these treats.

From the Spangler Candy Company site:

This product is gluten-free but it is not kosher certified. The facility does process soy which can be something that some people need to be aware of. Many old candy products are allergy-safe, but this is one of the less safe options out there for some people.

During the original transition from the name Hub Wafer to Necco Wafer, there were various ads that made it clear these were the same candies. The product had been known by the Hub Wafer name for so long that the company didn’t want people to think that Necco Wafers were a different and totally new product.

A history of Necco Wafers video:

How Necco Wafers are made from a video made in the early days of the company’s change to the Necco Wafer name:

Another how Necco Wafers are made video:

What flavors are Necco Wafers?

What are Necco Wafers?