Life Savers candy are one of the most iconic candies around. Almost everyone has had these delightful little treats at one time or another in their life and they continue to be some of the most popular candies of all time. This classic candy that is ring-shaped has continued to be created in much the same way that it always has been and even the packaging is the same for the most part as it has been since the first day it was sold.

If you have never had this delightful candy, you have been missing out on a treat! This is one of the best candies that offers up a delicious and flavorful taste profile for all ages. This is a classic candy that is made with various flavors and there is something for everyone contained in each roll of lifesavers that is sold.

This candy was first made by Clarence Crane in 1912. It was made at first as a summer candy that was intended to withstand the summer heat better than chocolate items. The name of the candy was picked because of the shape of the candies that looked like the rings that were carried on boats to save those who had fallen overboard. The original candy was made in mint varieties that were intended to hold up to the summer heat and the fruity flavors were not the original goal of the candy maker at all. This is hard to imagine now since the fruit flavors are so popular and so distinctly bonded to the candies.

Clarence originally had been making maple syrup and chocolates in his business, but he found that chocolates and other products melted in the summer. He knew that pharmacies sold round mints that were made to hold up to the heat of the summer and he found out that the round candies were made by punching holes out of a disc of material. This made him think that the rings of material that were leftover might also be sold successfully.

The original flavors of the candies were Wint-O-Green, Cl-O-Ve, Lic-O-Rice, Cinn-O-Mon, Vi-O-Let, and Choc-O-Late. These candies persisted until the 1920s when a new flavor was added. This flavor was Malt-O-Milk. Malt-O-Milk performed so badly that it was discontinued right away. In 1921, the fruit version of the candies was introduced as fruit drops. It was not until 1925 that the manufacturing process would allow for fruit-flavored rings to be crafted.

Crane registered the trademark and then he sold the rights of the candy, which under the patent was “Pep-O-Mint” peppermint candy. Edward John Noble bought the candy patent and the rights to it for $2,900. The candies were originally sold in cardboard rolls but this did not prove to be a successful packaging method for them. The now-familiar foil wrappers were originally made of tin-foil and were efficacious at keeping the mint rings safe and secure and fresh.

The later versions of the foil wrapping were improved upon until the current pattern was created. This lighter-weight product is easier to break into and is not as expensive to produce. The colors have also improved over the years and the wrappers are now made with a variety of stripes to indicate the flavors contained within. The first casings for the rolls of candy were solid in color but used the same style font for the Life Savers name.

Noble then founded the Life Savers and Candy Company in 1913 and expanded his market to sell in stores near the cash registers and in restaurants. He also told store owners to offer a nickel in the change they offered customers with the suggestion that they should buy a roll of Life Savers candy. The slogan that accompanied the candy for many years was, “still only 5 cents”.

The five-flavor rolls were first sold in 1935. Merger after the merger took place until Life Savers candy finally became the property of Mars, Inc. After one of these mergers, the gummi version of the candy was included in the offerings of the brand. There were further additions to the stable of Life Savers products including Crème Savers in 1998 and Life Saver Fusions which were discontinued in 20001.

Over the years, there have also been Fruit juicers, Life Saver Holes, Life Saver Lollipops and a Life Saver Squeezit flavor. Life Savers candy even tried to create a drink brand to compete with Snapple and Fruitopia in 1995. 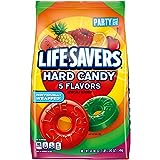 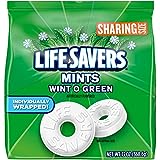 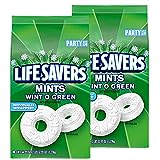 You can also buy Life Savers Candy at Old Time Candy by clicking the image below.

The Life Saver candy Storybooks are made with different flavors and they might have mixed fruit flavors or there might be a single variety in the book.

Blackberry was not a success as a flavor and some of the original mint-related varieties also did not succeed for long. The classic fruit flavorings have long been the most popular of the varieties and the butter rum is a close second. There are few other candies on the market that can compete with these flavors and you will find that you would struggle to find any candy that can compete with Life Savers.

There were some brave competitors in this space that have sold matching candies over the years to compete with Life Savers candy. Polo Mints were made by Nestle and they were ring-shaped mint candies that were sold in Europe. This candy led to a lot of wrangling with the Life Savers brand over the style and design of the candy.

The Life Savers brand has so completely owned this marketing space that there have not been many other brands that have tried to outshine the familiar and popular candy. There are some other competitors in the gummi candy space, but the hard candies are well-positioned to hold their own against a competitor that might try to horn in on their sales.

The ingredients in the Life Savers candy are:

The dyes and other flavorings can vary greatly depending upon the flavor of the role of candies. You will find that some of the coloring and flavor components can vary but the overall composition of these candies is almost always the same.

The exception is the mint flavors which have these ingredients:

There is a very popular urban legend that says that Life Savers candy were made with a hole in the center to make sure that you would not choke on the candy if swallowed whole. This was linked incorrectly with the safety of the candy for children. This fueled the popularity of the candy for distribution to children but was all an urban myth.

The candy was made that way to save money and to make the candies look different from others on the market at the time, but the myth persisted anyhow. One of the great ironies of this story is that Crane’s child, who was his only son, did die at sea in 1932. He jumped overboard in the Gulf of Mexico and his body was never found.

Life Savers were included in millions of boxes of ration kits that were sent to soldiers during WWII. A little-known fact about the production that was done during this period was that it was only possible to make so many of the popular candies because other candy manufacturers donated their own sugar rations so that the candies could be made. Life Savers have always been at the center of many campaigns for social good and this was one of the first times that they were used in this way.

The company continues to donate to various causes with the money made by this candy. This first bit of support for the troops so far from home was just the first time that the candies were used in this charitable way.

One of the original slogans of the Life Savers candy was, “For that stormy breath” which was linked to the Life Saver shape. This slogan has been brought back along the way a few times for more modern ad campaigns. “Still only five cents” was the most popular of the slogans and it stuck for many years of the marketing of the candy that has become so popular over the years.

A commercial from the 90s: