The Dominican Republic’s cuisine is an intriguing fusion of its many cultures, including African, Taino, and European influences as well as Middle Eastern, Asian, and Mediterranean immigration. Dominican snacks are full of surprises, and some of the best examples include Caribbean rice and beans and specialties like mangu and sancocho.

There are a few Dominican snacks that are regarded as must-haves and should be on your list of dishes to try if you want to taste Dominican cuisine like no other. Although these treats are traditional, they always provide the same amount of excitement when eaten. So, let’s explore some of the most beloved traditional Dominican snacks.

Tostones are deep-fried plantains and are frequently offered as a side dish and one of the most popular fried Dominican snacks. The term “tostones” is derived from the Spanish verb “to toast.” In Honduras, the phrase is also used to refer to a fifty-cent coin.

The food’s origin is rather mysterious since some people think it is a Caribbean dish, while others think it is a dish from Latin American cuisine. After being removed from the frying pan, the plantains are flattened, which makes them soft on the inside and crispy on the exterior.

This snack resembles potato chips and French fries quite a bit. Mojo sauce pairs incredibly well with patacones (a kind of garlic sauce). When served, some cuisines top these plantain chips with grated cheese. Native people typically put on ketchup and mayonnaise and enjoy. Along with fried chicken and other meats, tostones are common street food in the Dominican Republic as well as at local restaurants and resorts.

When the Americans invaded the Dominican Republic in 1916, the era of mangú began. Then one day, a soldier became curious about the mashed plantains the villagers were eating. After tasting it, he exclaimed, “Man, this is good,” and pointed to it while saying, “Man, good!”

Dominicans have mangú, similar to how Puerto Ricans have mofongo. This traditional meal with African influences is made up of a pile of mashed green plantains and red onions that have been sautéed in vinegar sauce. After being peeled and cooked, the plantains are mashed into a delectable, soft mash.

This meal is frequently served for breakfast, accompanied by “Los tres golpes,” or the “three hits,” a side of fried eggs, fried salami, and fried cheese. In many homes, mangú is also taken during supper. In addition to local eateries, resorts and hotels all across the Dominican Republic serve mangu as part of their breakfast buffets. Other than that, mangú is also often consumed as a snack.

Chicharrón de Pollo is a popular dish in the Dominican Republic and Cuba as well. The chicken pieces used in this recipe for Chicharron de Pollo are marinated, breaded, and then fried. It is a highly popular meal on the entire island, both at eateries and among its inhabitants.

Due to the frequent preparation and consumption of chicharron, the city of Bayamon has earned the moniker “the ciudad of chicharron.” Although it utilizes a different marinade, the Brazilian dish Frango à passarinho is extremely similar to the Dominican dish Chicharron de Pollo.

The chicken thighs are more delicious when the bones are left in. The second trick to keeping the meat soft in this dish is the marinade, which uses the well-known adobo sauce. Pre-cooking and softness of the meat are made possible by the use of vinegar, garlic, olive oil, oregano, salt, and pepper.

Pasteles season occurs around Christmas for a lot of Dominicans and Puerto Ricans. Pasteles come in a variety of forms, such as pastel de plátano, pastel de yuca, and pastel de arroz.

They somewhat resemble Tamales. But typically, the ingredients for the Christmas pastel include a combination of mashed viandas (root vegetables and plantains), a mixture of yauta (malanga), and guineo verde (green banana). Additionally, it also has olives, garbanzo beans, manteca de achiote (annatto-infused lard), and minced pork.

Those fillings are then wrapped in banana leaves and parchment paper. The entire box is cooked for an hour in salted water. Pasteles en Hoja is one of the most cherished Dominican snacks that are worthy of recognition.

Catibias o Cativias are traditional Dominican Snacks that are sometimes also called wheat empanadas. In the colonial era, the Dominican Republic, then known as Hispaniola natives were introduced to the Spanish delicacy empanada. According to historians, pancakes made of wheat and beef or pork were popular in Santiago, the second-largest city in the Dominican Republic. In the sixteenth century, those Dominican snacks were actively consumed by locals.

A popular Dominican Republic delicacy, helado de batata (ice cream), is typically served with fresh mangoes and passionfruit. This simple, delectable delicacy is an all-time favorite because of the coconut and Japanese sweet potato combination, as well as the top layer’s smooth mango and tangy passionfruit. In the Dominican Republic, this deliciously sweet snack has been made for decades. Therefore, grandmothers often make them for their grandkids.

Habichuela con dulce, a sweet bean confection cherished by Dominicans, is typically served over Easter Week. Although its origins are still unknown, it is believed to have come to the Dominican Republic from southeast Asia.

The ingredients in this unusual delicacy include coconut milk, condensed milk, red kidney beans that have been cooked, cinnamon, sugar, vanilla, cloves, salt, and raisins. The entire mixture is prepared in a large pot, then chilled and topped with cookies.

Throughout the weekend, it’s usual for families and neighbors to exchange handmade habichuelas con dulce. If you’re in the Dominican Republic during Easter Week, you definitely should try it. It can be found at any pastry shop around the nation, along with many other traditional Dominican desserts like cakes and glazed fruits.

A common drink from the Dominican Republic called “morir soñando” has spread to other Caribbean and Latin American nations. It is often prepared with orange juice, milk, cane sugar, and chopped ice. Sometimes evaporated milk is substituted for ordinary milk, or vanilla flavor is also added. Depending on the area and family background, the recipe differs widely. The beverage has been compared to an orange creamsicle by American observers. Another option is the Orange Julius drink.

In the Puerto Rican version, where vanilla, lemon, or lime zest is added, Morir Soñando has become rather popular. Oranges can be substituted with chironja, blood oranges, or tangerines. The beverage is still served with limbre, which is Puerto Rican ice cream with a coconut-cinnamon base and piragua.

The holidays are a special time of year to spend with family and share customs and memories. Mantecaditos are amazing Christmas cookies and widely adored Dominican snacks. You should try these delicious sweets if you’re searching for a simple, buttery, tiny cookie to eat with a mug of coffee.

It assembles similarly to shortbread. However, it requires turning before taking its final shape. On the counter, the shaggy dough will gather together and keep the cookies neat and small. Those wonderful butter cookies can instill a festive spirit and happiness. 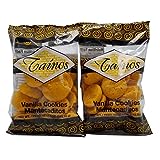 Dominican Buñuelos are syrup-soaked fluffy fried balls. They are a wonderful, luxurious treat that requires a short amount of time and can be made with a few basic ingredients. Who will not love fried dough balls drenched in cinnamon and vanilla syrup? They are actually a one-of-a-kind treat.

Known as Buñuelos de Viento, this meal is popular across the Hispanic world and is typically eaten on Christmas or All Saints Day in Spain and other Hispanic nations. It is eaten during the Lenten season in the Dominican Republic.

While it is frequently seen being consumed in other nations sprinkled with sugar and cinnamon powder, Dominicans like it to be covered with a mildly flavored syrup known as Almibar, as already mentioned above. A yuca-based variation, which is also offered during Lent, seems to be more common in the Dominican Republic.

If you’re searching for something a bit unique to add to your cookie or candy boxes, you definitely need to try one of the most popular Dominican snacks, Jalao. And indeed, the main ingredients here are coconut and honey. It has a great texture and is sweet and natural. The honey will grow thicker and darker as it cooks, making the candy much simpler to handle.

Using little paper cupcake liners for serving will make it easier to set, even if it will still be sticky.

Is there a dish that expresses “love” more effectively than honey? So give these honey and coconut delight balls a try.

The Jalao snack has a few variations. One of the most popular, which originated in the southern Dominican Republic, has ginger and molasses in it. Jalaos’ color depends on the type of honey that is used. Some people choose to add molasses, while others choose not to.

If you have a trip planned to this Caribbean island known for its natural beauty, don’t forget to request a taste of these delectable sweet and savory Dominican snacks as soon as you arrive. The savory and salty snacks on our lists are Catibias o Cativias, Pasteles en Hoja, Chicharrón De Pollo, Mangú, and Tostones. Our list of sweet Dominican snacks includes Jalao, Buñuelos, Mantecaditos, Morir Soando, Habichuelas con Dulce, and Helado de Batata.