The Oreo cookie is one of the most iconic cookies people have enjoyed over the last century. Most people, children and adults alike, would choose Oreo cookies over any other choice. This cookie has something so perfect – two thin chocolate cookies with a delicious cream filling. They are perfect for eating alone, dipping in milk, opening the cookies, and eating the filling first. There is no wrong way to eat an Oreo.

Now that you are craving some Oreo cookies, why not spend some time learning about their history and some fun facts?

When Did Oreo Come Out?

March 6, 1912, was a beautiful day – it was the day that the Oreo cookies were finally introduced to the world. For some perspective, here are some other things that happened in 1912:

What Does Oreo Mean?

No one really knows. However, there are a few different theories on the namesake. Unfortunately, this is not a name that was after someone – there is no Mr. or Mrs. Oreo. Some believe the name is based on a French word meaning gold (Gold lettering was on the original packaging); others believe it was based on a Greek word that meant nice or attractive. The original design of the cookie was of a laurel wreath, and many believe the cookie was named after one of the species of the Laurel family – Oreodaphne.

The original Oreo in the test phase before it was released to the public was shaped like a mound, and some people believe the cookie was named for the Greek word for a mountain, Oreo. Finally, some people think they just tool letters from the words chocolate and cream to form the word Oreo, which is short and easy to remember.

When this cookie was initially released, they came up with the original laurel wreath-based design that created a visual signature. Even without the word Oreo, everyone can recognize the cookie by the very detailed design on each chocolate wafer.

Initially, the design was created by brass rollers being passed over sheets of tasty chocolate cookie dough. The pattern on these rollers contains four-leaf clovers and the word Oreo in the middle.

If you ever saw someone eating a Hydrox cookie in the past, they were not eating a copycat. The Hydrox cookie came first. Hydrox was released four years before Oreo in 1908 and was manufactured by Sunshine Biscuits. Although this cookie is no longer around, it did stay on the market for 90 years. This cookie stopped being produced in 1999.

These two cookies were very similar, but not the same. Oreo has a much sweeter filling, and they got soggier in milk quicker, whereas the Hydrox cookie had a crunchier shell; in 1996, Sunshine Biscuits were bought out by Keebler, and they discontinued Hydrox cookies in 1999 and replaced them with Proxies. Then Keebler was bought by Kellogg’s in 2001, and they decided to remove Proxies from the grocery market in 2003. Kellogg’s released a similar cookie under the Famous Amos line, but that has since disappeared.

Unfortunately, the drama does not end there. There are many fans of the original Hydrox cookie. So after a phone call and online petition drive by these fans, Kellogg’s released the Hydrox cookie in 2008 to celebrate its 100-year anniversary. This only lasted for about a year. Then Kellogg’s let the trademark expire. So in 2014, Leaf Brands registered the trademark and started producing Hydrox cookies in 2015.

In 2017, they redid the recipe to remove artificial flavors. In 2018, they filed a complaint with the US Federal Trade Commission against Mondelez International, the current makers of the Oreo Cookie, asserting that they are hiding Hydrox cooks from customers on the shelves of grocery stores. This is an ongoing saga that has not been concluded yet.

What Type of Oreo Cookies Can You Buy Today?

Over the years, the type of Oreo cookies has greatly expanded. Some flavors have come and gone based on customer wants and needs, but there are still plenty of different flavors on the market today for your enjoyment. Here are the current Oreo cookie selections you can buy:

Other Oreo Products and Ideas

Since Oreo cookies have been around for such a long time, and for the majority of that time, they have enjoyed more than their share of popularity, they have been known to expand beyond cookies. Here are some Oreo treats that they currently offer:

Besides all the different Oreo-based official products you can buy, Oreo cookies are the main ingredient in many home baker’s desserts. One of the biggest things many people use Oreos is a chocolate crust. It is really easy to make a homemade chocolate crust for pies, cheesecakes, tarts, and other desserts by simply crushing Oreo cookies and mixing them with melted butter. Then press it down into the pan and bake for about 5 minutes until set.

With over 100 years of history associated with the Oreo – there have been many different changes along the way. Here are a few interesting things that happened to this beloved cookie over time:

Over the years, many slogans have been either said out loud (in commercials and advertisements) or printed on posters and in newspaper print ads. Here are a few of those slogans: 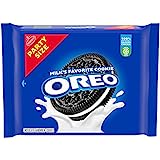 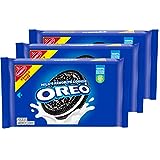 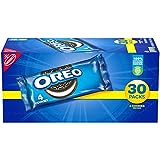 The majority of OREO products are produced in Spain, however some are also produced in Czech Republic and Ukraine.

In a standard sized Oreo cookie package they have always had three rows of 15 cookies, for 45 total in the package.