Some people aren’t big fans but many of us remember growing up with Swedish Fish and still turn to these fun chewy candies to enjoy when we want that little something sweet. Swedish Fish have been around forever, it seems.

One of the interesting things about this unique candy is that they are labeled as fat-free and gluten-free. Is it really so that a yummy gummy candy could really have those qualities? Let’s take a look at the history and details of the popular Swedish candy.

Swedish Fish would now be considered an old-fashioned candy. It’s been around for so long and continues to be a popular choice in some areas. It’s one you can always order online but if you walk into any old-time candy shop or a location that often has some of these older candies, you’re bound to find the fish and be able to reminisce and savor.

Swedish Fish were originally introduced in the U.S. in the late 1950s. We don’t have the exact year but know that it was in that era. When you pick up a bag or package of Swedish Fish, you may notice right away that there is a label that says “A fat-free food” right above the candy name.

This sweet treat is also gluten-free. While the most common Swedish Fish is red, there are other colors too. There are not a ton of colors. Most packages have red, green, and yellow fish. There is also a blackfish in Sweden that is meant to be flavored like herring.

Swedish Fish are gummy candy that is sweet and shaped like a fish. It even has a lot of detailing on the gummy for the fins, scales, and head of the fish. It’s pretty unique compared to other gummy candies on the market.

Considering the packaging of Swedish fish and the claim to no fat, their ingredients are interesting and might be something that turns people away. Here are the ingredients in the candy.

The ingredients serve a purpose but are unusual considering the labeling. Invert sugar is used in this case because the fish could retain moisture so it helps with that. The fructose used in the ingredients allows Swedish fish to have an incredibly long shelf life. They are not likely to spoil any time soon.

We touched on the ingredients mostly because some of these may cause some to raise their eyebrows. It’s interesting to see the purpose behind the choice of ingredients and to know these are still popular.

Where is Swedish Fish Manufactured

In the current day, Swedish Fish in the North American continent are manufactured in Canada. They are made in Hamilton, Ontario. In Canada, the distributor name is Mondelez International’s Maynard brand.

These fish are made in a couple of other countries as well. In Turkey, they are still known as Swedish Fish but made by Mondelez International. In Sweden, the fish are known are pastellfiskar and made by the Malaco brand. There are some other brands that make a similar product in that area as well. However, the Malaco brand is a well-known option and they have a mixed candy bag that contains fish in it.

Interestingly, the company created YouTube channels in 2016 because of the renewed popularity of Swedish Fish. These created advertisements are known as “Giant Fish” and “Treadin’ Water” as a miniseries.

The original Swedish Fish were all red but we mentioned earlier there are other colors now. The red color was the original, as was the flavor – which has never really been verified. We will talk more about the flavors shortly.

When Was Swedish Fish Invented?

It’s not clear when exactly Swedish Fish were invented or the individual who invented them. However, we do know that they were originally created in Sweden and meant to be a candy that signified Swedish culture.

Fish was used because it is one of the main parts of the Swedish diet. Fishing is also a popular pastime in Sweden culture. The candy was known in the U.S. already but was popular in Sweden.

In the 1950s, Malaco (the Swedish Fish Company) partnered with North American company Cadbury to be able to expand and bring this candy into North America at that time. Malaco is still very much in control in Sweden and continues to produce and distribute the candy there.

In North America, the production and distribution take place through Mondelez now, rather than Cadbury as was the original party in North America. Mondelez is situated in Ontario, Canada.

Who Invented the Swedish Fish?

We don’t really know the history of a specific individual who came up with some great ideas to create Swedish Fish. Most of the history is related to a Swedish company that wanted to create a candy that captures Swedish culture.

This company was Malaco and Malaco still produces Swedish Fish in Sweden today. We’re not even sure really how long Swedish Fish were in Sweden before they made their way to North American in the 1950s.

Malaco did a great job of displaying Swedish culture with a fish that looks almost realistic. They chose fish because it’s a common part of the Swedish diet but also because fishing is a popular hobby in Sweden as well.

The same company in Sweden still owns Swedish Fish. When they partnered with a North American company, originally they used Cadbury. However, since that time, Mondelez is not the company that makes and distributes throughout North America. This company is located in Canada.

There have been some other partnerships as well in more recent years. In 2009, Rita’s Italian Ice had a flavor known as Swedish Fish flavored ice that was co-branded with Swedish Fish. The Trident company produced a berry + lemon flavor that was meant to imitate Swedish Fish as well. Trident is also owned by Mondelez.

Nabisco also has a Swedish Fish flavored Oreo for a while in 2016. They were only available at Kroger stores throughout the U.S. but are no longer in production.

The bottom line is that if you’re looking for Swedish Fish, you probably won’t really have any troubles finding it to soothe that sweet tooth. 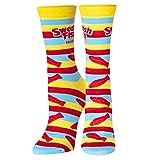 The original was only available in red. There was also a time where the small sizes of the fish were only in red but you could buy larger Swedish Fish in all of the colors. The colors remain very limited with 3 basic colors. They have had some other colors over the years but red, green, and yellow remain the primary colors you will find.

There has always been a lot of controversy over the actual flavor of the redfish, though. A lot of people assume it is cherry and stick to their guns on that fact. We think that since it’s a red candy people simply assume it’s cherry.

There is also a common rumor that the flavor is actually lingonberry. This berry is also known as cowberries. The berry is bright red and is found and used more in Nordic or Baltic cultures so it could make sense for Swedish fish. However, no flavor has ever been officially confirmed by the companies.

They did have a grape flavor for a while but this was discontinued as of 2006. They also have had orange, lemon-lime, and pineapple in their flavors.

Did you know that in the detail of the fish, the word Swedish is also branded in there from the mold? It is estimated that more than 7,000 metric tons of Swedish Fish are produced every year.

Also – in Sweden, they have a black Swedish Fish, which is the flavor of black herring. Certainly not the same flavor ad you might expect when you eat a piece of candy but they seem to like it there and it ties in with the cultural aspect of the candy as well.

Swedish Fish are pretty easy to find. You can locate them at just about any traditional candy shop. The Old Time Candy stores always have them. They are also pretty commonly found at grocery stores and gas stations too.

While this candy may not be everyone’s favorite, it remains a popular choice and it is pretty easy to find at just about any store that sells candy.

What flavor are Swedish Fish?

There has always been a lot of controversy over the actual flavor of the redfish, though. A lot of people assume it is cherry and stick to their guns on that fact. We think that since it’s a red candy people simply assume it’s cherry.
There is also a common rumor that the flavor is actually lingonberry. This berry is also known as cowberries. The berry is bright red and is found and used more in Nordic or Baltic cultures so it could make sense for Swedish fish. However, no flavor has ever been officially confirmed by the companies.

Fish was used because it is one of the main parts of the Swedish diet. Fishing is also a popular pastime in Sweden culture. The candy was known in the U.S. already but was popular in Sweden.