If you love cereal, you likely already are at least a bit familiar with Cinnamon Toast Crunch. This flavorful classic will taste just like cinnamon toast in a bowl of milk. It’s utterly delicious and oh so good.

There are some other products that have fallen under the Cinnamon Toast Crunch name through the years as well. Take a look at the details below to learn so much more about this sweet cereal.

Cinnamon Toast Crunch is a simple cereal packed with flavor. It’s made with little squares that could resemble toast. The squares are covered in cinnamon and sugar for the perfect sweet addition. Each square is made with wheat and rice. They slightly puff the cereal squares just a tad and infuse them with these flavors.

This cereal is known for sounding a lot like Rice Krispies when you add the milk. Since they are slightly puffed, you get that crackle and pop effect which is just as fun as eating the cereal. This has always been a popular feature of the cereal.

This cereal is also sold in countries outside of the US. It has different names in some locations. For example, in the UK it’s called “Curiously Cinnamon”. In the French Canada region, it’s called “Croque-Cannelle”. And throughout Europe and Latin America, it is known as Cini Minis.

The cereal was first produced in 1984. It is owned and sold by General Mills and has been for close to 40 years now. One interesting thing about the history is the fact that the original cereal actually had plain squares. It was just the wheat and rice. The cinnamon and sugar were added later to make it more appealing.

Cinnamon Toast Crunch was created by a scientist named John Mendesh. He worked closely with Elisabeth Trach, who was the assistant product manager at General Mills at the time. The idea was taken from a contest that the company had run. Kids could submit their favorite idea for cereal and be entered to win a prize. This was one idea submitted and they put it to use.

The early advertising that began used bakers named Wendell, Bob, and Quello for marketing. They were animated and they acted as the mascots for many years. At some point, they narrowed it to just one baker, keeping only Wendell for marketing purposes.

The early slogans for the company came were much later than the three bakers but all three bakers were still present. It was about 1995 when they created their first tagline “the taste you can see”.

They had some other lines through the years as well. “It’s that intense” was the next one but it was a flop in comparison. They also tried phrases like “crave those crazy squares”, “breakfast on a whole other level”, and more. Their current catch line is “unlock the cinnaverse”.

One significant event that happened more recently is the saga where a shrimp tail was found in someone’s box of cereal. If you watch the media or social media, you likely saw these conversations and the craze that is caused at the time.

A customer found what appeared to be a shrimp tail in their box of cereal. There was a huge production about General Mills telling them it was just a clump of sugar. That same customer actually found several other contaminated items in their box of cereal. He tweeted a massive post about it and the saga went viral. It was picked up by several news sources as well.

The last known information was that General Mills was investigating but there have been no further updates since the incident in 2021. There were never any recalls or other reports, not even a real statement by General Mills.

When Was Cinnamon Toast Crunch Invented?

Cinnamon Toast Crunch was first invented in 1984. It’s been around for just short of 40 years at this time. It was invented by a scientist who paired up with the assistant product manager of General Mills.

The duo took ideas from a contest to submit cereal ideas and then ran with it to create this fun and tasty cereal option. The original cereal didn’t have the swirls of cinnamon-like what you see now, although they did have flavor in them.

Now, they are puffed, cinnamon and sugar swirls are added, and they have a flavor that is primarily unmatched by any other cereal in comparison.

Cinnamon Toast Crunch is owned by General Mills Company. General Mills makes a lot of different cereal options and they do a great job for the most part. They have always been the owners of this particular cereal and it has never had to change hands.

In the cereal industry, this is actually more common with some of the big name cereals but it’s also not uncommon to see even cereal change hands in ownership several times, particularly when they have been around for 40 years.

How Did Cinnamon Toast Crunch Get its Name?

The naming convention is fairly easy to pick up on here. Each little square in this cereal almost resembles a miniature piece of toast. Each square is puffed so it has the perfect amount of crackle and crunch. Of course, each piece also has cinnamon swirls on it.

When you put those three elements together, you get Cinnamon Toast Crunch. Makes perfect sense to us! The name has always remained the same. Although, as we did mention earlier in this guide, there are a few different names that are used in different countries. That includes Curiously Cinnamon, Croque-Cannelle, and Cini Minis. 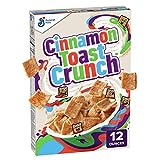 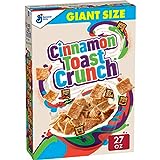 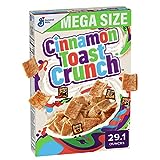 There have bever been any other flavors of this cereal. It has always been cinnamon toast crunch. However, they have made several spinoff cereals throughout the years that branch off from this cereal.

They were all their own cereal but branched from this particular option and often inspired from it as well.

Here are some of those.

Most of these flavors were short-lived. Some of them have come back seasonally. In 2022, there was a new creation known as Lucky Charms Cinnamon Toast Crunch Mix that debuted. It will be interesting to see if this one sticks around.

Overall, Cinnamon Toast Crunch is the only one that has reliably stayed on the market through the years. Currently, you can find churros, Rolls, French Toast, and the original for sure.

Outside of cereal, there have been some other creations by this brand as well. Some of that includes cereal bars, ice cream, seasoning blend, frosting and cake mixes, creamy spread, and more.

Cinnamon Toast Crunch is a timeless classic. Whether they continue to bring out new and exciting ideas or they stick to the basic cereal, they really can’t go wrong. It’s all about that sweet, cinnamon burst of flavor. It’s oh so yummy.

How many calories in Cinnamon Toast Crunch?

There are 170 calories in a 1 Cup Serving of Cinnamon Toast Crunch.

Cinnamon Toast Crunch (CTC), known as Croque-Cannelle in French Canada and Curiously Cinnamon in the UK (previously Cinnamon Grahams), and as a variant called Cini Minis in other European and Latin American countries, is a brand of breakfast cereal produced by General Mills and Nestlé.

When did Cinnamon Toast Crunch come out?

How much sugar is in Cinnamon Toast Crunch?

There is 10.2g of sugar in 1 cup of Cinnamon Toast Crunch.