There are few cereals as iconic as Rice Krispies. It can be used to make delicious Rice Krispy treats or eaten by itself for a fun dining experience. This is one of the few cereals that is sold nearly everywhere in the world, and many kids remember well their first bowl of Rice Krispies cereal. There are few things that stand out, like a cereal that pops and crackles as you eat it.

Rice Krispies are still one of the most popular cereals around, and if you have never tried them, you need to get on that! You will love this fun cereal, and it might even replace your daily breakfast cereal as soon as you try it.

Kellogg’s has been synonymous with cereal ever since it opened its doors, and this is probably one of the most famous products that the company makes. Sitting right alongside Corn Flakes, Rice Krispies have delighted generations of people who love cereal. The Kellogg’s brand is also able to market to the entire world, which is unusual for a company in this market.

Rice Krispies cereal is known as Rice Bubbles in Australia and New Zealand but is sold under the Rice Krispies name in many other markets. They are called Rice Pops by generic brands and Crispy Rice by others. These are knock-offs, however, and are not the original product, nor are they made by Kellogg’s.

This cereal was first made in 1927 and then released to the public in 1928. Rice Krispies is made of crisped rice which is made by combining rice with sugar paste. The resulting rice mix that is then cooked creates “berries” that are thin and toasted and which are hollow. This unique design is what makes the cereal snap, crackle, and pop as it is eaten.

When milk is added to the cereal, it starts to snap and pop, which is where the “snap, crackle, and pop” slogan for the cereal comes from. This reaction happens due to the air that is trapped in each of the cereal “berries”. These air pockets release their air when the cereal changes form with the addition of moisture. The snapping and crackling can actually be quite loud when you fill up a big bowl with this cereal and then add milk. Some people also really enjoy the popping sensation in their mouth when they eat this product.

Rice Krispies have been advertised for years with the help of their mascots, the Rice Krispy elves. These cartoon elves are fittingly named Snap, Crackle, and Pop. In the early 60s, there was even a commercial with the elves that included a sone that was recorded with The Rolling Stones. This was used for a television commercial, and it indicates how much the brand had already found its footing in pop culture.

Ads using the elves always mention the noise that the cereal made, and early ad campaigns called the product “the talking cereal”. Kids love things like this, and this gimmick that is part of the formulation process that makes the cereal has made Rice Krispies one of the most popular cereals with children for years. The elves were also really fun and silly, and kids loved them immediately as soon as they were added to marketing efforts for the brand.

There was actually also an elf that was known as Pow. He was included in just two commercials in the 1950s and was supposed to be a family friend. He was meant to highlight the nutritional “pow-er” of the cereal. He also wore a spacesuit, probably in an effort to connect the cereal to the obsession with the space race that was everywhere at this time.

The mascots for this cereal might be just as famous as the cereal itself. They have been present in the ad campaign efforts for the cereal since 1939. They have been used for movie shorts, comic strips, cartoons, and more. Before they were used to advertise the brand, Woody Woodpecker was actually the mascot of the cereal. These two cartoon characters are the two longest-lived cartoon characters ever to be used to advertise a cereal.

In other places, the elves have other names. They are called Pif, Paf, and Pof in Belgium, Knap, Knaetter, and Knak in South Africa, and Riks, Raks, and Roks in Finnish. In Sweden, they are Pim, Pum, and Pam, and in Spain, they are called Pim, Pum, and Pam. In Germany, they are known as Knisper, Knasper, and Knusper. These different names are interesting because they reflect the phonetics of different languages related to the sounds that the cereal is supposed to make. There might not be any other brand that offers this unique feature, and Rice Krispies is really unique among food products that this is part of the advertising planning for this breakfast item. 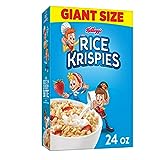 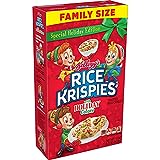 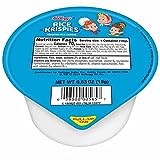 From the Wikipedia entry for the cereal:

The company states as well that the rice used for the US version of the cereal comes from rice that is grown in Louisiana and Arkansas.

In 2010, Kellogg’s was found by the Federal Trade Commission to be making claims about health that could not be made by a company that sells food substances. These misleading health claims were being included on the boxes of Rice Krispies that were on shelves around the world. The claims stated that the cereal could help with your child’s immunity and that the cereal had been improved to include nutrients and antioxidants that would keep the family healthy.

The Kellog’s Company had also been cited for claims that were made on the Frosted Mini Wheats cereals that this cereal would improve children’s attentiveness by up to 20%. These claims had to be removed from all the cereal varieties that had false claims associated with them. This kind of incident is common with cereal companies, and Kellogg’s is not the only company that has done this to try and increase sales of their cereals.

There are actually various kinds of Rice Krispies cereal that you can try. These varieties are commonly sold all over the US and might also be offered in other markets as well.

There are other generic versions of Rice Krispies that are sold with both frosted and chocolate variants, which are produced by other companies. There are knock-offs that might not be as good as the original products.

Rice Krispy Treats were actually originally made by Mildred Day, who had originally been a taste tester for Kellogg’s. She made these treats for Camp Fire girls to sell, cooking for 16 hours a day to make the batches at the last moment. The treats were such a hit that the recipe started to be shared by Kellogg’s as well as other cooking experts.

Kellogg’s also now makes Rice Krispy Treats called Rice Krispy Squares. There are also some cereal bars and a multi-grain Rice Krispies cereal that can be found in some markets. This second kind of cereal is meant to be sold to those looking to improve their digestive health, and it includes a prebiotic for gut health.

There are also some discontinued products that some people might remember fondly:

Other Treats Related to Rice Krispies

There have been many other well-known recipes and treats that have been made over the years by people all over the world using Rice Krispies. The most well-known is probably the Rice Krispy Treat, but there are other common treats that people often make for parties and other events using this cereal.

In Australia, there is a homemade treat that is made in many households called chocolate crackle. This is made with Rice Bubbles and cocoa, and melted chocolate. There might even be dried fruit included in the snack. These homemade sweets made with Rice Krispies are almost as popular as the cereal itself.

A black and white ad:

How are Rice Krispies made?

Rice Krispies are cooked, dried and then toasted.

What are Rice Krispies made of?

Rice Krispies are made of Rice, sugar, contains 2% or less of salt and malt flavor.

How many cups in a box of Rice Krispies?

What are Rice Krispies?

Rice Krispies is a breakfast cereal, marketed by Kellogg’s in 1927 and released to the public in 1928. Rice Krispies are made of crisped rice and expand forming very thin and hollowed out walls that are crunchy and crisp.

How much sugar is in Rice Krispies?

How many carbs in Rice Krispies?

How many calories in Rice Krispies?

Rice Krispies are made by Kellogg’s.