Kellogg’s Corn Flakes has been a staple of the kitchen pantry going all the way back to the early 1900s. While some might think Corn Flakes cereal lacks the pizazz of some flashier, sweeter varieties designed to appeal to children, its history more than makes up for any thought that Corn Flakes might be bland.

The origin story for Corn Flakes involves the now world-famous Kellogg family. There’s a bit of a dispute about which family members were involved and to what degree. More on that in a bit. What does seem to be agreed upon is that the cereal was created for patients of the Battle Creek Sanitorium, where brothers Will and John Kellogg worked. Despite what would become its name – Corn Flakes – the original formulation was made with wheat.

The Kellogg brothers hatched the idea for the breakfast food as an inexpensive but nutritious way to feed residents of the sanitorium. They experimented with different types of dough and consistencies, eventually deciding to roll dough out in very thin sheets. According to some accounts, John Kellogg develop a rolling system for this purpose and inadvertently left some of the dough sheets out overnight. Rather than throwing the dough away, he rolled them again, creating the tell-tale flakes, which were then baked to crispiness and eventually became Kellogg’s Corn Flakes.

Ella Kellogg, the wife of John, would not entirely agree with John’s account of the birth of Corn Flakes. She claimed it was her idea to roll the dough into the thin sheets. But John had a counter-claim: He said the idea came to him in a dream and that he used Ella’s kitchen equipment to do the rolling.

Regardless of who did what when it was up to Will Kellogg to figure out what had happened and make it happen again. Ella and her brother-in-law did not have a particularly cozy relationship, and each told a story that downplayed the other’s involvement. In the end, the process of rolling and then baking the grains became the standard way to produce flaky cereals of all varieties, including what we now know as Kellogg’s Corn Flakes.

Once the Kellogg family began serving their flakes – now made out of corn – to the patients at the sanitarium, they soon realized they might be onto something. The cereal was very popular at Battle Creek. The brothers decided to market their Corn Flakes to the wider public, securing a patent in 1896, though that process, too, had its controversies.

The patent for “Flaked Cereals and Process of Preparing Same” was filed on May 31, 1895, and issued on April 14, 1896, to John Harvey Kellogg as Patent No. 558,393. Two things worth mentioning: The patent applied to a variety of grains and Will Kellogg’s name was nowhere to be found. This led him to once again assert that he, not Ella Kellogg, had participated in the invention and that he deserved much more credit.

Nonetheless, it was Will Kellogg who took charge of trying to mass market the corn cereal. He started a company called Battle Creek Corn Flake Company and added sugar to the flakes to make them palatable. That did not go over well with brother John Kellogg. And that wasn’t the only interesting decision Will made. In 1907, he launched an advertising campaign that offered a free box of cereal to any woman who winked at her grocer. In 1909, he came up with another offer called the Funny Jungleland Moving Pictures Booklet. The booklet was available to anyone who bought two boxes of Corn Flakes. That promotion ran for 22 years.

The success of the Kellogg’s Corn Flakes campaigns and the subsequent skyrocketing sales did not go unnoticed. A former sanitorium patient, C.W. Post, started to make his own products, including Post Toasties. He wasn’t the only one trying to get into the act. Many brands of Corn Flakes-like breakfast cereals, including one called Sanitorium, began showing up on grocery shelves, and the competition continues today, though Kellogg’s is certainly dominant.

The first Kellogg’s Corn Flakes boxes featured a woman holding a bouquet of corn with the tagline, “The Sweetheart of the Corn.” Eventually, the Kellogg’s company recognized the popularity and power of the breakfast cereal mascot, including the ones used for their own products, such as Snap, Crackle and Pop for Rice Krispies and Tony the Tiger for Frosted Flakes. They commissioned an advertising company to create a mascot for Corn Flakes. Meet Cornelius Rooster.

Cornelius began appearing on cereal boxes in 1957 and then eventually was featured in television commercials. He was typically shown in profile in print with a sweeping green and red body, a red plume of feathers on his head, a yellow beak and tailfeathers in red, yellow and green. He appeared open beaked as if to crow “cock-a-doodle-doo.”

In early commercials, Cornelius, or Corny for short, finds himself in silly situations that make him hold back his enthusiastic crowing. For example, one TV ad has him visiting a library. Each time he tries to crow, he is stopped by a stern librarian. After a few rounds of stifling, Corny has a great idea. He pours himself and the librarian a bowl of Corn Flakes. As soon as they eat them, both Cornelius and the librarian let out full-bodied cock-a-doodle-doos for all to hear.

Cornelius was typically shown in non-speaking roles later in life, but that wasn’t always the case. In an ad campaign featuring a young boy who desperately wanted a dinosaur adventure, Corny comes to animated life to roam the jungle with the boy. All is well until they encounter some giant, angry dinosaurs and find themselves trapped. That’s when Corny encourages the boy to eat a bowl of Corn Flakes, which makes the boy grow taller and taller and taller until he is able to cup Cornelius in his hand and save the day.

In addition to his classic crow, Cornelius had a slogan he used when he had speaking roles. The signature line, “Wake up, up, up to Kellogg’s Corn Flakes!” was voiced by two actors, Dallas McKennon and Andy Devine.

“Dal” McKennon was also the voice of several well-known television figures, including Gumby and Buzz Buzzard from the Woody Woodpecker cartoons. McKennon voiced characters for Disney productions, too, including “Lady and the Tramp,” “Sleeping Beauty” and “Mary Poppins.” Quite a bigger platform than he had found in Corn Flakes ads.

Andy Devine was a voice actor who also took appeared in movies and TV. He played the role of Cookie, a buddy of Roy Rogers, in 10 movies and appeared with John Wayne in films including “The Man Who Shot Liberty Valance” and “How the West Was Won.” His raspy, wheezy voice was his trademark – both as a live-action actor and as a voice actor. Devine told people that he fell into a curtain rod as a boy, piercing the roof of this mouth, and when he could talk again, his voice had changed. Some say this was a tall tale, but either way, Devine was a key player in the success of Cornelius and Kellogg’s Corn Flakes. 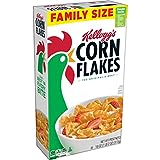 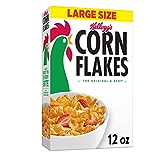 Corn Flakes are popular around the world, and some flavors have been developed to reflect different cultures. In India, flavors include Thandai Badam, Kesar Pista Badam and Rose Badam. Those varieties incorporate classic Indian flavors such as almonds, Kesar, saffron and pistachio.

Corn Flakes are an essential ingredient in a number of recipes, including fried chicken, as a topping for any number of casseroles and in a classic green and red Christmas wreath treat that is a tradition across the country. The use of Corn Flakes in recipes has become so popular that Kellogg’s developed a product called Kellogg’s Corn Flakes Crumbs. These offer the classic taste and crunch of Corn Flakes Cereal in a form that can be used as an all-purpose coating or topping for chicken, pork, skillet dinners and in cookies, cakes and pie crusts.

How many calories in Corn Flakes?

There are 357 calories in every 100 grams of Corn Flakes.

What are Corn Flakes made of?

Corn Flakes are made of Maize, Barley Malt Extract, Sugar, and Salt.

How are Corn Flakes made?

In October and November, the corn is ready to be harvested and taken to a mill, where it’s cleaned, sifted and rolled, before being shipped to a Kellogg’s factory. … Those flakes are then cooked, dried, and toasted to become Kellogg’s Corn Flakes ready for you to enjoy.