Ever wondered what makes Japanese culture so unique? If you’re familiar with Japanese cuisine, chances are that you consider it among those things that make this country stand out in all Asian cultures.

It goes without saying that Japan is a wonderful country where history and traditions are interwoven into the lifestyle of the local people. This nation not only has an awe-spiring culture but also offers some of the most delicious snacks in the world. Japanese snacks are truly worthy of recognition because there you can find something you like, starting with the salty and savory and ending with sweet.

So, if you’ve decided to get to know Japanese culture, you should know that starting with Japanese snacks can be the best possible idea to catch a glimpse of the Japanese spirit. In this article, we’ll discuss some of the most famous local Japanese snacks you need to try if you want to feel the true spirit of Japan.

Regardless of whether you prefer sweet, sour, or salty snacks, if you’re an adventurous person who’s always eager to try something new, it’s likely that famous Japanese snacks will surprise you. Let’s start our list of original snacks from this country with sweet treats that tend to be the most popular not only in Japan but among all Asian cultures.

Dagashi is one of the oldest Japanese snacks, which was first produced during the Edo Period using grains and thick malt syrup. It was common among locals and also known as “ichimon gashi,” which translates as “one coin candy,” due to its low cost. When stored “Hoshi ii” (dry boiled rice) was discarded in certain local domains, it was converted into dagashi, which quickly established itself as a typical local dish and is still made and consumed today.

In the Kansai region, dagashi are also known as “zatsugashi.” The word “dagashi” was used to distinguish them from “jogashi,” which were snacks of better quality. It was kind of a copy of miscellaneous Japanese snacks.

Dagashi snacks’ ingredients were constrained at the time, and the use of pricey refined sugar was outlawed. Traditional dagashi is linked to the idiom “the sweet taste of dried persimmons,” which is seen as representative of the time.

Anpan is one of the most famous Japanese sweet snacks that has gained popularity all around the world. They are small sweet rolls that have different fillings inside. The different versions of Anpan include red bean paste, white beans, green beans, chestnuts, and sesame seeds.

Anpan is a part of Japan’s distinctive bread culture. Believe it or not, during the Meiji era (1868–1922) in Japan, a samurai named Yasube Kimura, who was out of a job, opened a bakery in the Ginza district of Tokyo and started selling Anpan.

It is impossible to talk about Japanese snacks and not mention Mochi. The Japanese rice cake known as mochi is produced with mochigome, a short-grain kind of sticky rice, and occasionally other ingredients including sugar, water, and cornstarch.

The rice is ground into a paste and shaped, typically round. It is usually created in Japan during a ritual known as mochitsuki. One thing is for sure – if you’re a sweet lover and ever happen to be in Japan during Christmas time, consider yourself lucky. Why? The reason is that the Japanese New Year is when mochi is traditionally served and consumed, but it is also a year-round meal.

In addition to carbohydrates, protein, lipids, and water, mochi has multiple dietary components.  These delicious Japanese treats have heterogeneous structures of starch grains, air bubbles, and amylopectin gel. The mochi-making rice has a gel-like consistency because it contains little amylose and a lot of amylopectins. Compared to regular short-grain rice, the Japanese rice used to produce mochi has a greater protein level.

Mochi has special cultural importance in Japan, although it shares certain traits with other fortunate meals in other Asian nations. People think that steaming sticky rice and turning it into a paste originated in ancient China.

It is believed that this technique was brought to Japan from the Southeastern part of Asia. In the 6th century, which is also known as the Kofun era, clay steamers were commonplace in every household, especially in eastern Japan, and handmade mochi manufacturing reportedly soared.

This one might be more familiar to you than other sweet Japanese snacks. The reason is that  this Japanese treat is famous in almost all corners of the globe! Pocky is a box of chocolate-coated crispy biscuit sticks, and it has been one of the most well-liked Japanese snacks since the Glico firm first offered them to customers in the 1960s. Other flavors outside the standard chocolate include banana, strawberry, green tea, cookies, and cream.

The Pocky stick’s innovative construction includes a special biscuit handle that may be used for picking up the biscuit with fingers without having them get covered with chocolate. In Japan, Pocky is so well-liked that November 11 is designated as Pocky Day to honor them!

The almond- and strawberry-coated Pockys came after the original version that was chocolate-coated. New variations were introduced in 1971 and 1977. Today’s product line also includes themed items like “Decorator Pocky” with its brightly colored decorative stripes. Additionally, the line also includes the sticks with bittersweet chocolate, which is called “Men’s Pocky” and is supposed to be eaten alongside whisky. 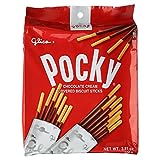 After briefly discussing the most popular Japanese sweet snacks, let’s dive into the salty and savory journey and find out why people adore traditional Japanese flavors so much. And guess what? If you are a real fan of snacks, chances are that you’re already familiar with most of these salty and savory Japanese snacks. Let’s start with Wasabi Peas.

If you enjoy the spiciness of wasabi, there are many different kinds of foods you may taste in Japan that include this flavor. Wasabi peas are traditional Japanese snacks made from roasted green peas covered with a wasabi coating to produce a fiery and crunchy-tasting food. Those delicious, savory treats are one of the most popular wasabi snacks.

Wasabi peas are made from Marrowfat peas. Once the peas reach maturity, they are picked and dried.  After roasting, these peas are sprinkled with wasabi powder and oil. However, some brands of wasabi peas can be so hot that they can make you cry. Therefore, it is often challenging to eat several pieces at once. 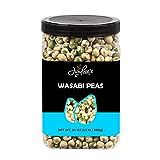 The crispy Jagariko potato sticks are one of the most loved Japanese snacks, formed like sticks and marketed in cups that resemble the packaging for instant noodles. This mouthwatering treat is made from processed fried potatoes and somewhat resembles French fries. Jagarico is manufactured by several large companies, one of them being Celbee. Celbee first introduced the snack to the mass market in 1995.

One of the most popular flavors of Jagarico is Hokkaido Butter, which is made using premium Japanese butter from Hokkaido. Other popular tastes are salad, which has vegetables like carrots and parsley, and cheese. The cheese includes cheddar and a camembert mix. In newer variations of this salty treat, the flavors of sirloin steak, soy sauce, and seaweed salt with sesame oil are included. 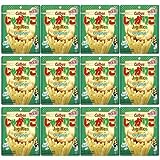 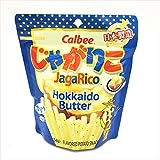 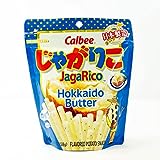 Due to their resemblance to orange seeds, kaki no tane, a type of miniature rice cracker produced from mochi rice, gets its name in English, which translates to “persimmon seed.” They are a well-liked snack and are generally consumed while drinking beer.

Kaki no tane is among the mouthwateringly salty Japanese snacks. Typically, the snack has a spicy soy sauce flavor, which is salty and spicy in flavor at the same time. Kaki no tane comes in a variety of tastes, including chili pepper and wasabi. However, a variation that has peanuts in it is called kakipi. Kameda Seika, a company that specializes in creating rice snacks, is one of the most well-known producers of kaki no tane in Japanese snacks.

Onigiri is rice balls that are often covered with nori seaweed and have a vegetable or meat filling. Those delicious Japanese snacks are considered sandwich substitutes and are very nice quick meals. Onigiri, also known as nigirimeshi, omusubi, or rice ball, is made with white rice that has been shaped into triangular or cylindrical forms.

The fillings vary and often include sour and salty ingredients such as salmon, kombu, katsuobushi, pickled ume, takanazuke, mentaiko, and tarako. These delicious Japanese snacks can be found in most Japanese restaurants around the world.

In this article, we discussed some of the most amazing authentic Japanese snacks and briefly explored their backgrounds. Once more, it is clear why this nation is so amazing and unique. Every piece of culture is woven into the recipes of their traditional food, and as a result, simply outstanding cuisine is presented.

Which Japanese snacks have you tried? Or which one would you try if you had a chance? Share your thoughts and emotions in the comments section below.