Every country worldwide has its own popular snacks that people enjoy the most, right? Switching things up and tasting snacks from different regions may be an interesting way to explore a new culture. It turns out that just like traditional and popular British candies, British snacks are truly worthy of honor for locals and people from all over the world.

We are aware that the British enjoy tea and eating fish and chips. What else do they like, though? There are several delicious British snacks available, many of which you’ll likely wish you had discovered earlier. In this article, we’ll discuss some of the greatest British snacks you need to try.

It goes without saying that British people love crisps. Therefore, in the UK, there are various flavors of crisps, including those that are particularly distinctive and very unique, such as Scampi and Lemon, Guinness, Worcestershire Sauce, and Prawn Cocktail flavors. If you want something simple, you can always go with a traditional onion and cheese, salt and vinegar, or simply salted one.

The UK is home to several different crisp-producing companies, such as Walkers, Monster Munch, Kettle Chips, Hula Hoops, and Mackie’s of Scotland. For a truly British experience, put your crisps between the two slices of bread and eat a crisp sandwich.

If you’ve ever looked through the snack aisle of a store in the UK, you know that they have a whole different selection of tastes when it comes to crisps. The main flavors of Walker Crisp include Marmite, beef and onion, Prawn Cocktail, cheese and onion, smoked bacon, salt and vinegar, Worcestershire sauce, tomato ketchup, and pickled onion.

Walkers is one of the most popular British snacks that mainly serves the UK and Ireland. Producing potato chips and other snack items is what the business is best known for. Walker Crisps controlled 56% of the British Crisp market in 2013. The company was created by Henry Walker in 1948 in Leicester, England. 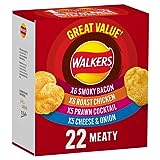 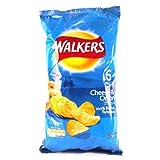 KP Hula Hoops are hollow, short cylinders made of potatoes. The shape makes them easy and pleasant to chew. People love it when they frequently discover that a little more spice has collected inside the rings’ interiors. KP Hula Hoops come in varieties including Original, Roast Chicken, Smoky Bacon, Salt & Vinegar, Cheese & Onion, BBQ Beef, and Sweet Chili. 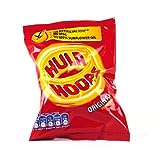 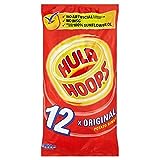 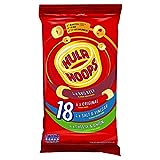 Guinness Crisps are British snacks that vegans and vegetarians are especially fond of. That’s particularly noteworthy in a country where so many baked items are produced with genuine butter. Potato snacks flavored to taste like Guinness beer are nothing less than what they sound like: “Guinness crisps.”

This is an Irish snack, but as we naturally include everything from the British Isles, we’ve included it in the list of snacks. They are available in a rich beef chili flavor in addition to the basic Guinness flavor.

Those delicious British snacks were invented by McVitie’s. As we can see from its name, the main ingredient is cheddar cheese. Additionally, they have all kinds of interesting tastes and flavors, including Red Leicester, Stilton, Smoked Applewood, Branston Pickle, Marmite, and Prawn Cocktail. One of the strangest flavors offered by this brand of British snacks is Branston Pickle. Those mini cheddars resemble biscuits in texture. 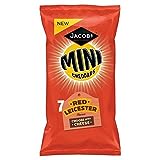 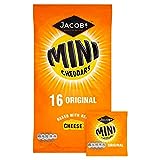 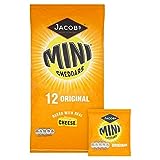 One of the most common varieties of British snacks is scones. Traditional British scones are made with cheese. Typically, a mixture of flour, butter, milk, baking powder, salt, and shredded cheddar cheese is used to make these little nibbles. The ingredients are combined into a dough that is flattened and then folded over many times before baking.

Cheese scones that have been baked can be broken in half with just two fingers without cutting. Cheese scones are typically served with stews or soup after being cooked till golden brown. However, most people love them warm and slathered with plenty of butter, just as they are.

The deep-fried Mars bar is a well-known Scottish treat from the list of foods that belong to the “Scottish Diet.” The phrase “Scottish Diet” stipulates that alcohol, sugar, and fat must make up at least 30% of a person’s daily calorie intake.

The odd snack was created in the 1990s by the staff of the Stonehaven, Scotland, Carron fish bar, where the well-known fish and chips are served. What gives this British snack its uniqueness is that after it is dipped in milk, flour, and eggs, Mars chocolate bars are deep fried in the same oil that is used for fish and chips. The treat is constructed of nougat and caramel and covered in milk chocolate.

But this sweet was adopted as a Scottish institution, replicated in chip shops all throughout the nation, and even made its way to countries such as Australia and New Zealand.

It would be a crime to refer to this rich, flavorful sandwich as “melted cheese on bread.” Welsh rarebit is a traditional snack that is best made with locally produced cheese variations, including Caerphilly cheese and cheddar cheese. Both of them are melted and combined with cream or ale, and then poured over bread that has been buttered and is still hot from the oven.

This British snack dates back to the 14th century and was created to highlight the superiority of Welsh cheddar and wheat bread. The argument between the names “rabbit” and “rarebit” continued until the 19th century. This is when the term gained popularity. The Welsh were terrible hunters; therefore, cheese was served for supper instead of rabbits. Hence the origin of the “rabbit” version.

Traditional British snacks known as sausage rolls are made with sausage meat that has been baked after being wrapped in puff pastry. Sausage buns are frequently coated with milk or eggs before baking. They can be finished and served either cold or hot. Originally created using shortcrust pastry, they are now available in many bakeries and stores across the nation in puff pastry form.

When cooked at home, sausage rolls are often served as a snack. It is advised to serve them plain or with a couple of delectable side dips.

One of the most well-liked British snacks, Scotch eggs are made of boiled eggs that have been wrapped in sausage meat and covered with breadcrumbs. The eggs can, however, be made somewhat runny if preferred. After the eggs are covered in all those ingredients, they get deep fried until they get a golden color.

Although they can be eaten either hot or cold, eggs are typically eaten cold. In most cases, they are served with pickles and a side of fresh salad. The snack is thought to have been created in the early 19th century when people would dip their eggs in boiling water that had been disinfected with lime powder.

In England, mince pies are traditional Christmas snacks that consist of a flaky pastry shell stuffed with various kinds of dried fruits and spices. Initially, the pies had both savory and sweet elements, including cheese, lard, and ground beef.

The pies’ initial rectangular shape led to associations with the manger where Jesus was born. The treats were traditionally made for Easter and Christmas, and the use of exotic spices and ingredients was a way for cooks to show off their wealth to others.

Golden syrup, oats, sugar, and melted butter are combined to make flapjack, which is then cooked and often divided into squares or rectangles. Both maple syrup and corn syrup can be used instead of the traditional golden syrup, and a little salt and minced ginger are frequently added for taste.

Flapjack is a perennial favorite in England and other countries due to its ease of preparation and the low number of ingredients. This sweet bar is the ideal snack for eating on the move and is a staple for teatime, lunch boxes, and picnics. The texture can be chewy or crispy, depending on personal tastes and preferences.

A Bakewell Flapjack is a sweet British snack that combines a flapjack with a Bakewell pie, two popular English sweets. The Flapjack is a bar made out of oats, whereas the Bakewell tart is an almond and jam-filled shortcrust pastry. Basically, this meal is made up of three layers: an oat-almond crumble layer, a fruit jam, and another crumble layer.

Golden Syrup, ground almonds, oats, plain flour, and melted butter are all ingredients in the crumble recipe, which is often flavored with almond extract. After spreading jam like cherry, plum, strawberry, raspberry, and strawberry, over a portion of the crumble in a lined and oiled baking dish, another layer of crumble is added on top. It indeed gives you a heavenly sensation while you eat it.

In this article, we discussed some of the most famous British snacks. Learning about the diverse cuisines that this nation has to offer is truly a great experience. This article should serve as motivation for you to try any of them if you haven’t already.

Have you tasted any of those British snacks mentioned above? How did you like it? Which is your favorite? Share your thoughts in the comments section below.