It’s always crucial to research the local cuisine before visiting a new place. Food tells us stories about the culture and traditions of a specific country. It gives us information about what people have been eating for centuries. France is well-known for its candy, cheese, baguettes, and wine, but what about French snacks?

In this article, we will discuss some of the traditional French snacks that are available around the nation. Everyone can find something they like here, from sweet to salty to savory. So, let’s start exploring the unique French snacks and their characteristics.

Few foods have achieved the same level of global recognition as Pommes Frites. This French snack is made of potatoes sliced lengthwise and deep-fried in hot oil. Belgium considers itself to be the creator of this particular treat. So, there is pretty big competition between Belgium and France about the precise origin of Pommes Frites.

French people consume it often as a side dish or a snack, and there are even Pommes Frites shops, also known as frietkots or fritures, all across the nation. Pommes Frites in the Belgian style is made from scratch, sliced into thicker strips, and immediately cooked.

French fries known as Pommes Frites are frequently offered with a number of dipping sauces, including ketchup, mayonnaise, and aioli. They frequently go with French cuisines, like steak frites or poulet frites, and can be eaten as a side dish or even as a main course.

Chickpea cakes that are deep-fried are called panisses. These savory French snacks are native to the Provence and Côte d’Azur areas of France. They are made of chickpea oil, flour batter, salt, and boiling water, and may be eaten as a snack or as a side dish. They have a creamy, crispy, and savory flavor all at once. Some people have compared them to a cross between hummus and French fries.
The greatest accompaniment to Panisses is rosé wine, and the kids’ version of these treats may also be coated with confectioners’ sugar. Panisses gained popularity in Marseille’s Old Port during the 1930s when they were served as a full dinner with a variety of salads.

These spherical, light, airy puff pastries were created in Paris’s Antonin Carême’s pastry shop in the early 1800s. They are baked so that the center can be removed, revealing a hollow where the delicious mixture is placed. The term “vol-au-vent” is French for “flight of the wind.” The name matched the snack perfectly, and it resembles the vol au vent pastry that is up in the oven as it bakes.
The vol-au-vent made famous by Carême included either chicken mince, shrimp, bread crumbs, and mushrooms in a Madeira sauce as its filling. Vol-au-vent is now frequently served as a snack. 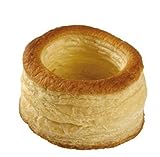 The southern French city of Nice is the homeland of the delicious snack pissaladière. The snack is made using a special kind of dough that has been stuffed with black olives, onions, and anchovies. It kind of resembles pizza, but is much thicker and is eaten as a snack or appetizer. After that, the dough is fried in an oven until golden brown.

In the past, it was typically prepared and sold every morning. The term “pèi salat,” which translates to “salted fish,” is the source of the dish’s name. Fish is one of the main components used to make pissaladière. The dish is said to have been created between the years 1305 and 1377.

The interior of a pizzadière is soft and chewy with a crispy crust. The onions donate sweetness and depth of taste, while the anchovies and olives give it a salty flavor. This treat is one of the most delicious and loved French snacks that every visitor has to try.

Galette-Saucisse is one of the most famous French snacks. It is generally a sausage wrapped in dough. The sausage has a savory taste, and when wrapped with the dough, it resembles crepes. The dough can be seasoned with pepper, salt, and herbs and is commonly made with whole milk, flour, and eggs. The sausage can be any variety of beef or pig sausage, although it is most frequently grilled or smoked. Typically, mustard is offered with galette-saucisse so that it may be dipped.
Although this food is popular throughout France, Lyon is where it is most prevalent. Lyon, France’s gastronomic capital, is where many well-known chefs call home. The city has a rich culinary heritage and is well-known for its wide variety of classic French meals.

Gougères are little, hollow pastries made with choux dough that have Emmentaler, shredded Comté, or Gruyère cheese added. Gougères are like cheese puffs that can be eaten both cold, and hot. As an appetizer and as a snack, the Gougères are often eaten while drinking champagne or wine.
These delicious treats were created in the 17th century in the area of Burgundy. The creator was a business named Le Ramequin de Bourgogne. Additionally, gougères can be served sweet with a variety of fruit preserves on the side.

Choussons aux pommes is a traditional French snack with apples as the main ingredient. This delicious treat is made with pastry dough, and the apples are spiced and then stuffed. The glaze is composed of sugar and cinnamon. The turnover of Chaussons aux Pommes is made with apples that have been peeled and cored, sugar, flour, puff pastry, cinnamon, and beaten eggs.
The middle part of the puff pastry circle is filled with a delicious sweet mixture. Then, it is folded like a semicircle. The pastry is cooked until the dough puffs up and turns golden brown. The sweet and savory Chaussons aux Pommes are often served warm. They may be found all across France, but the Brittany area is where they are most widely baked.

The name of these very famous French creations comes from the French term “Les dames blanches,” which translates to “the white women.” These circular French snacks are made with wheat, sugar, and eggs. They are frequently cooked until they are a light golden brown and often have flavors such as vanilla and lemon.

Additionally, sugar frosting is typically applied to these cookies to add taste and provide a sophisticated white appearance. Those popular French snacks are offered with afternoon tea.

Chouquettes are the ideal French snack that is both tasty and simple. These little pastries have a crisp, airy texture and a somewhat sweet flavor. They are produced from the same choux dough that is used in many French pastries, such as cream puffs and éclairs. The dough is then adorned with the Surce Perlé which is the sugar crystals that keep the beauty and crunchiness of the treat.
They may be found all across France, but the Alsace area in the northeast is where they are most well-known.

Macarons are one of the most popular French snacks that have especially become loved and famous worldwide in recent years. The legend has it that the macaron was first served in France in 1533. The era of macaron making in France started after Queen Catherine de Medici married king Henry II. She was from Italy and brought the original recipe with her.

French pastries called macarons are created with a mix of sugar, almond flour, and egg whites,  using almond flour and sugar. After being shaped into little circles, the dough is cooked in an oven. After they are ready, the macarons are filled with various delicious fillings. Traditionally, ganache, buttercream, or jam are used to fill macarons.

Macarons have a crunchy crust and are soft inside, making them light and airy. They are made even more delicious and luscious with the addition of the filling. These little French snacks are ideal as an afternoon treat or a morning snack.

Macaron School: Mastering the World’s Most Perfect Cookie with 50 Delicious Recipes
$19.79
Buy on Amazon
Bestseller No. 2

The Canistrelli is a well-known French snack native to the Corsican region. These cookies are sold in specialty areas of supermarkets in southern France as well as all around the island. To make Canistrelli, the following ingredients are used: flour, sugar, butter, eggs, and almonds. The dough is made with those ingredients, and once it is ready, it is then divided into little squares after being flattened out onto a thin sheet. After that, the cookies are fried in an oven until they get a golden color.

With a hint of sweet almond taste, Canistrelli has a flaky and very soft texture. This delightful French snack pairs wonderfully with white wine, in addition to coffee or tea.

French snacks are among the tastiest in the world. The treats that we explored above are just a small sample of the numerous wonderful French snacks that you may taste. One thing that is very distinctive to this nation is that there are a lot of treats made from pastry.

Those people have mastered making variations of pastries and have many different versions of snacks to offer. In the French Snacks list, you can definitely find something to enjoy, whether you prefer sweet or savory foods.

Which French snacks have you tasted? Or which one do you want to try? Share your thoughts and experiences in the comments section below.