Fruity, juicy, chewy, delicious – all of these words have been used to describe Mamba candy and they are all absolutely right. Originally launched in the German market, this candy has been popular since the day it debuted.

Mamba has a long, steady history behind it. This candy was originally produced in Germany and made its debut in 1953. It came to the United States in 1986. The candy has been around for nearly 70 years altogether and has been in the U.S. for close to half of that timeframe.

They’ve always had a steady burst of flavor with primarily the same standard flavors in every package. You can buy packages in multiple sizes, including packs of 6, 18, and 24. These sweet little candies are a fruity candy chew. While the original chew flavors are still a major part of the line, they have added some flavor options more recently to change it up as well. More on that later, of course.

Mamba’s slogan is “we’re different here”. They most certainly are different but their difference is full of reliable juiciness and people who like Mamba or give it a try love those details about the candy.

This 50s candy is very chewy. It’s described as a candy that will keep you chewing and chewing. However, they are juicy and fruity and you get to enjoy that flavor the entire time you are chewing the candy. When you enjoy Mamba candy, you get your chew on. That’s part of the fun of it.

Mamba candies are still made in Germany by Storck Candy Corporation, which is where they originated from in the beginning and most likely where they will stay. Hopefully, these candies aren’t going anywhere anytime soon and it certainly doesn’t look like they will be disappearing when you look at the new and fun things the company continues to do for the brand.

Mamba is bold and fruity. The original flavors still exist and still continue to be popular as well. You can easily find Mamba heavily involved in all of the major social media platforms, including Facebook, Twitter, and Instagram. That’s the best way to stay tuned to their latest ideas and additions.

When Was Mamba Candy Invented?

Mamba Candy was originally introduced in 1953 in Germany, under the Storck Company. It has always stayed with this company and won’t be going anywhere anytime soon. Mamba was presented to the United States in 1986 and has been selling strong ever since.

The candy continues to be made and manufactured in Germany but is popular everywhere it is sold. The candy is made for chewiness and juiciness. You get the exciting flavors that you can chew and chew and enjoy the juicy flavors until it is all done.

Then, you can take a break and when you’re ready enjoy another random flavor from the pack. You really can’t go wrong with any flavor!

Mamba is owned by Storck, which is also known as August Storck KG. This is the original company that released Mamba candy in 1953. The same candy is still manufactured and sold in Germany as well as the United States.

For close to 70 years, the same company has kept the same delightful candy and while they have added new flavors over the years, ownership has never changed hands. It can sometimes be challenging to find a candy that has been around this long and always been found under the exact same ownership.

So many of them come to market and then change hands multiple times. Some of them change flavors and recipes but Mamba is the same as when it was started, aside from the addition of new options and flavors. However, Mamba continues to have the same original flavors still available as their foundational options and you can enjoy some of the others as well.

How Did Mamba Candy Get its Name?

We don’t really have any special stories that we could find that discuss just how the Storck company chose to name this candy. However, when you think about the things that describe Mamba, you hear words like juicy, fruity, and chewy.

When you think of the Mamba dance, you think of exciting things so perhaps we could speculate that the name is tied to the exciting aspects of the candy. Of course, that’s just speculation but it makes a great story behind the delightful flavors of the candy, right?

Mamba’s original flavors included strawberry, orange, raspberry, and lemon. Those original flavors still stand and are still a vital part of the brand. However, over the years, the company has added new flavors and new fun options as well.

Here are some of the things you might find out there.

These are the flavors that you can find pertaining to Mamba candy but you can also find a variety of different bags, packages, and styles of the candy now as well. The original candy was just a little square chew. It could be compared to Starburst as far as the design and the chewy, juicy flavors.

However, the brand has grown over the years and brought exciting new options to the table. Here are some of those.

Each of these is unique and the packages come in several different sizes as well just like the originals always did.

The original is known for being bold and fruity with its 4 original flavors. This is where it all started and where the magic continues to stay.

Mamba Sour takes all of the original flavors and gives them a sour twist so you get the same delicious boldness but you also get a bit of a pucker added to it. The tropics flavors brought a whole new adventure to the world with the twist flavors that we shared above in the flavor list.

All of these flavors are tropically inspired and they are absolutely delicious. They are so tropical that you can feel like you’re at the beach when you pop one of those in your mouth.

And then, there are the magic sticks. These are made in stick or rope form, rather than the traditional chews like the other options. The sticks put two flavors together to create a magical, flavorful stick and it’s been a big hit from the brand so far!

Mamba Candy is pretty easy to buy. You can follow them on social media and they have a website as well that details all of their delicious flavor options. These are distributed throughout the U.S. and Germany and are available at a number of stores.

You can find them in several candy stores, both in-person and online. You can also find them on Amazon. It really doesn’t stop there either. You will find them at a variety of retail chain stores and a variety of online locations.

You can do a quick search to maybe even find them near you or find them at a candy store that works for you – be it in person or online with the links below! 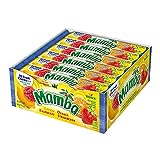 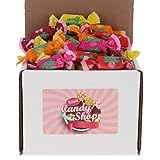 You can also buy Mamba Candy at Old Time Candy by clicking the image below.

Here are the ingredients of Mamba Candy.