Who hasn’t heard about this incredible snack called French Toast? It’s hard to imagine a more delicious snack or food in the whole candy world than the ones we used to enjoy when we were kids and remember as sweet childhood memories.

Even today, millions of people adore the taste of this historical snack. However, did you know that they invented the cereal version of French toast in the 1990s called French Toast Crunch?

If French toast was part of everyone’s morning breakfast routine, it was time for them to enjoy the happiness of French Toast Crunch cereal’s wonderful taste. People often say that French Toast Crunch is like a crunchy, sweetened corn cereal. These cute cereal pieces first resembled little slices of toast until they changed to curved square pieces, similar to Cinnamon Toast Crunch, its sibling cereal.

Let’s first take a look at how everything started.

The story of French Toast Crunch begins in the middle of the 1990s when General Mills, the manufacturer of this snack, introduced cereal with a French toast flavor. General Mills was created in 1928 and expanded as a food processor during the Great Depression, specializing in grains and flour goods. Inventing this kind of product was a great hit for the fans of French toast.

If you have asked them what this cereal tastes like, they will describe it as a crisp, sweetened corn cereal with a tasty french toast flavor in every bite. Based on the packaging, the cereal pieces were initially intended to resemble little toast slices. Later, the cereal’s chunk shape changed to Cinnamon Toast Crunch, which had square pieces that were slightly curved.

Marketing Made It Special

Well, if you are lucky and big enough, you will remember a chief guy named – Wendell in the television ads for French Toast Crunch. The chubby little baker known as Chef Wendell made his debut in 1987 on cereal boxes and TV advertising.

Chef Wendell was a cheery elderly guy who sang while he cooked and was occasionally seen alongside two other younger bakers. He was dressed in spectacles, a white baker’s cap, and an apron. People loved the snacks, and they loved the commercials they made. It was a genuine favorite to drizzle sweet syrup over crunch squares. All of it made the snack a real 90s classic.

The creators made a whole new story about the snack to make it more interesting for customers. The creation of French Toast Crunch was explained on the back of the first boxes of the cereal by the baking cartoon character Wendell.

Later on, the cereal pieces were changed from their initial look of little slices of French toast to a thin, wavy square coated with cinnamon and sugar flavor before returning when they restored the original shape. However, Wendell was “fired,” and the ad program changed to funny, smiling crunches.

Why Was the Snack Discontinued?

Have you ever heard anything about famous snacks and candies that were discontinued? Well, every candy has a hard period, and the French toast crunch was no exception. Due to poor sales and prevailing political conditions, General Mills decided to stop selling French Toast Crunch in the US in 2006.

French Toast Crunch was said to be a victim of the political climate of the time when French products were viewed as snobbish at best and subversive at worst. Not surprisingly, the demand from the customers soon made the company bring the cereal back. Let’s see what happened.

People recalled the flavor of the snack even after the product was discontinued. In 2014, Americans received the much-awaited news that French Toast Crunch, an adored and loved unavailable cereal, would once more be available on store shelves and people would once more be able to taste it.

General Mills finally re-released the snack on December 5, 2014, in response to high consumer demand. However, during this period, when the snack was discontinued, Canadian French Toast Crunch was produced and marketed using the original recipe and packaging.

The reintroduction of the snack includes a throwback to the days when the cereal bits truly had toast-like shapes. “You requested it. It’s back,” reads the box’s front, and the “Remember The 90s?” panel on the back of the new box has trivia about the pop culture around the time the cereal was first introduced in 1995.

Well, they did what people demanded and gave us back the French toast crunch, but unfortunately, Chef Wendall wasn’t reintroduced. 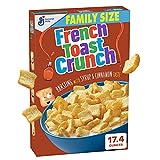 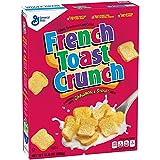 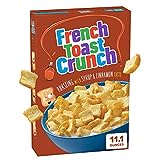 What is the flavor of French Toast Crunch?

General Mills French Toast Crunch Breakfast Cereal will help you rise and shine. These little, crispy cereal pieces with a French toast flavor are brimming with syrup and cinnamon flavor. You would get out of bed simply to get a taste of how amazing it is. Pour some milk into a bowl, then give yourself a few minutes to suck up the sweet cereal milk that is still at the bottom of the bowl.

The thing parents like about the snack is that it provides different vitamins and minerals as part of a delicious breakfast. However, this cereal is mainly targeted at children, though even grownups enjoy it very much.

How do you like to eat? You can put them over an ice cream sundae or use them as a dish of celebration appetizers being nibbled from. You can always count on them. French toast crunch cereal is available whether you’re seeking savory kid-friendly snacks, trail mix components, or just a simple family snack.

The list of the ingredients used to make French toast crunch is long. The main ingredients include sugar, corn meal, corn syrup, whole grain corn, canola, natural flavor, and salt, but the list is much longer, so always check the label of the box. However, even if you avoid sugar, tasting some of the sugar-free snacks may be a better idea.

As we already mentioned, the snack is also full of vitamins and minerals, some of which are calcium carbonate, iron, vitamin A, B, C, vitamin B6, and many others. Well, this definitely means that it is a healthy choice for your kids.

Even after so many years, French Toast Crunch doesn’t lose popularity. Many interesting things happened after the candy was introduced to the world. However, these things are what made us fall in love with this snack.

Here are some of the interesting facts about French Toast Crunch:

1. It’s very popular in the US

French Toast Crunch has many fans, but did you know that it was among the 11 best brands of cereal in America? Even more, it is the fifth most popular cereal in the whole country and the most popular one in 54% of the states.

2. Chef Wendell is the Killer?

Remember Chef Wendell? Who is the man sporting a chef’s hat who was previously depicted on the box’s front? Chef Wendell is the original mascot. In 1987, he made his debut appearance on cartons and in ads, and all the kids and adults loved him.

In the 1991 Cinnamon Toast Crunch advertisements and cereal boxes, Wendel’s two bakery employees vanished. Fans playfully conjectured that Wendell drowned his employees in a cinnamon swirl river because he was envious of their youth and buffer bodies.

However, General Mills said that the removal of the other two bakers and the increased prominence of Chef Wendell were the result of consumer input.

3. French Toast Crunch comes in a variety of flavors

Over the years, many aspects of the snack have evolved, and several new flavors have been developed to meet the demands of various consumers. For example, the popular Peanut Butter Toast Crunch was a favorite for many people.

What’s more, chocolate Toast Crunch and even Sugar Cookie Toast Crunch may come to mind, but none of them is as well-known as the original French Toast Crunch. You would only know the true taste of the snack if you had eaten it with actual maple syrup.

You’ve probably heard at least one recent buzz about famous pop and country star Taylor Swift. Well, believe it or not, T-Swift stated that her go-to comfort foods are “Pop-Tarts or Cinnamon Toast Crunch cereal.” It has the cinnamon and sugar combination that you prefer, after all. So if you haven’t tasted the snack yet, at least try it for the sake of Taylor.

French Toast Crunch is a great example of how snacks that can cause a high amount of nostalgia in people have the most power. Even though it was taken off grocery shelves in 2006 by General Mills due to low sales, candy nostalgia did its job. The unstoppable power of fans succeeded in getting back their childhood snack.

Real-life proof that followers’ commitment and perseverance may sometimes lead to great success. Thanks to them, now we can have this incredible snack for breakfast and share it with our loved ones.

Which flavor of French Toast Crunch would you try? Let us know below in the comments section.