The Whatchamacallit is a chocolate bar made with peanuts and layered with caramel. It has a strong peanut butter taste to it mixed with a nice combination of chocolate and caramel to back it up. Made by the Hershey company, the Whatchamacallit has maintained a popular following despite not being as well known as the Hershey bar.

The Hershey’s company Whatchamacallit was first invented in the year 1978. The bar first got its name from a woman named Patricia Volk. It seems as if at that time Patricia Volk was in charge of new brands for the Hershey company. The Hershey Company has a long tradition of providing the world with the best products that it could offer. Over the years Hershey’s company has produced numerous variations of their classic chocolate bar. In 1978 the Whatchamacallit Candy Bar was introduced. The exact inspirations for the name are thought to be an offhand declaration of what the product should be known as, such as “give me that Whatchamacallit.”

As the Whatchamacallit bar was first introduced in 1978, the popular belief is that it did reasonably well with customers since they continue to be produced to this day as of 2015. The bar has undergone some changes to the content of the bar over the years, and by the 80s, the Hershey company started to pay less attention to the bar since the commercials that were used to advertise the product started to become either less frequent on TV airing, or disappeared from broadcast altogether. Whatever the case may be, the company continues to produce the candy bar today and will continue to do so for times to come.

In its early years, the bar consisted of a milk chocolate exterior, and a peanut crisp on the inside that used peanut butter as the flavoring agent for the bar, with a layer of caramel. Nothing significant has changed as of today that can easily be noticed by the average consumer. But in 2008, Hershey’s started making some ingredient changes to their products since traditional manufacturing practices and ingredients were getting expensive.

The bar is also no longer considered milk chocolate since many of the changes made to the bar didn’t meet the stipulations that the FDA had created in order to call it milk chocolate since it didn’t contain enough cocoa butter. From that point on, the bar was only being marketed as being chocolate candy, instead of milk chocolate. Because of the secrecy that has surrounded the Hershey’s company since the beginning, from its mysterious producing practices the Hershey’s process, to the ingredients of the products that they produce today. Figuring out what exactly is inside of these bars isn’t an easy task.

After the ingredients changed, the company started making a similar product. The Thingamajig. It was a limited edition and production stopped in 2012. The differences weren’t quickly apparent, on the outside, the bar had its usual chocolate exterior. on the inside contained something different. Instead of having the peanut crisp that the whatchamacallit did, the thingamajig had a cocoa crisp chunk with peanut butter.

The bar started production in 2009 and was only available for a limited time. Apparently, there was a reaction with the sales of the bar, these were mostly curiosity sales from people that wondered what the differences between the two bars were. The company decided to reintroduce the bar in 2011. As of 2012, according to the Hershey company, the bar is no longer being produced.

The 90s candy bar is still being produced through can be hard to find at times. This could be seen as a mark of less popularity than say the Hershey Bar. However, the Whatchamacallit has withstood the test of time and still seems to be loved by many people.

What Year Was The Whatchamacallit Made?

The Whatchamacallit was first introduced in the year 1978. The launch of the bar seemed to be successful. Even all these years later, the company is still making it to this day, as of 2015.

Many people don’t see Whatchamacallit bars in stores often anymore this leads them to wonder if they are still in production but the good news is yes, they still make them as of this day.

The company that makes Whatchamacallit is Hershey’s company, and they first introduced it in 1978. Some other popular snacks made by Hershey’s are Reese’s NutRageous and The Heath Bar. However, the best-selling product and the signature one are considered to be Hershey’s Milk Chocolate. This particular one managed to become the most loved chocolate bar of the 20th century in America.

The Hershey Corporation was founded by Milton S. Hershey. The company is currently one of the largest confectionery manufacturers in the world and sells its products in more than 60 countries worldwide. First, Hershey’s Company was at first created as Lancaster Caramel Company, and “Hershey” actually became its subsidiary.

Hershey was founded in Hershey, Pennsylvania, and today, the headquarters are located in the same town. They are so proud of Milton S. Hershey and what he created that this small town has turned into a tourist destination. Among some famous attractions, visitors can see Hersheypark and Hershey Chocolate World.
It needs to be noted that one of the main ingredients of the Whatchamacallit candy bar is peanut butter. Ever wondered who created this all-time favorite sweet thing? Well, one of the first versions of peanut butter appeared in 1884. The discovery was made by Canadian pharmacist Marcellus Gilmore. He even patented the way to make peanut butter.

What Year Was The Whatchamacallit Made?

The Whatchamacallit was first introduced in 1978. The launch of the bar seemed to be successful. Even all these years later, the company is still making it to this day, as of 2015.

It goes without saying that the 70s were one of the most memorable decades and the time when the hippy subculture was born. Even though the cold war was around, it was still full of surprises and gave us important cultural and historical moments to remember. If you were a teenager in that era, you will eventually remember that Led Zeppelin and Pink Floyd were the things back then.

One of the most famous sweet treats of this period of time is Hubba Bubba, Twix, Laffy Taffy, Ring Pops, and many more.

Why Is It Called The Whatchamacallit

It is generally believed that Whatchamacallit was named that way to be a social pun. People often don’t remember the name of a product and thus use names such as Whatchamacallit to describe it. Thus do to this it is said the candy bar received its name to stand for what it would likely be called as an off-hand remark.

The has a nice caramel taste to it that is backed up nicely by the chocolate coating. It goes well with milk and is lightly peppered with peanuts throughout the candy. The Whatchamacallit is great when you craving a chocolaty treat with a light amount of peanuts mixed in. The caramel filling helps round out the package and gives the taste a little more of a memorable kick to it.

The Whatchamacallit candy brand is the creator of some other (similar) product lines. Those products are the Thingamajig bar and the Whoozewhatzit bar.

Another product that is concerning Whatchamacallit is the Whoozewhatzit bar. This treat was recently introduced and appeared on the market in 2021. The Whoozewhatzit bar consisted of crisped rice, cocoa crisp, chocolate, and peanut butter. The ingredients were kind of similar to the Thingamajig. However, some changes were made to this one.

A very interesting fact is that Hershey’s Corporation actually had a contest for the name. The price was $5,000 for the person who would come up with the most creative name. There were more than 43,000 suggestions for the names. The brand followed the “strange” name line and named its product “Thingamajig.” The winner was a girl from Framingham, Massachusetts, called Lisa M.

According to the brand manager of Whatchamacallit, “The new Whoozewhatzit bar has all the wacky, crazy, chewy-tastic perks that Whatchamacallit fans love, plus a few more.”

How To Make Watchamacallit At Home

It is always interesting to make your favorite chocolate candy at home. If you love baking and cooking, the process of making a Whatchamacallit candy bar will eventually feel wonderful. You will also get to try out the chocolate candy you created yourself. For this, you will need butter, peanut butter, caramels, sugar, chocolate chips, heavy whipping cream, Rise Krispy Cereal, and Mini Marshmallows.

The first step is to mix peanut butter, butter, and marshmallows and let them melt all together. Add some crispy cereal and stir well. After that, spoon the cereal onto the pan that has a cooking paper on it. Mix heavy cream and caramel in a separate pot and melt them together. Apply this mixture on top of the crispy cereal.

Combine the heavy cream and sugar well and make it boil slightly. Add the chocolate chips and mix them together. Pour this mixture on top of the peanut buttery layer. On top, drizzle the chocolate and caramel over.

Keep it in the fridge for 20 minutes and let it cool down and harden. Cut with a sharp knife and enjoy a crispy, sweet, and delicious Whatchamacallit candy bar made entirely by you.

One of the first versions of the Whatchamacallit candy logo dates back to the year 1978. Everybody agrees that the candy’s name is too long to be used in the logo. However, limitations do not apply to the Whatchamacallit brand. Yes, the logo consists of the word “Whatchamacallit,” and it actually looks great.

In the old version, the word “Whatchamacallit” is written in lowercase letters, and only “W” is in uppercase. The logo is bent sideways and has the left side lowered. The colors in the logo are dark brown, white, orange, and red. The name is not all in the same colors; instead, “what” is orange, “cha” is red, “ma” is orange, “call” is red, and “it” is orange again. The word is outlined in a dark brown color.

In the original logo, right below the name, “Chocolate Coated Peanut Flavor Crisp” is written in dark brown color and uppercase letters. On the upper left side, there is the “Hershey” corporation logo printed.

The new version of the logo was introduced in 2003 and is still used. The main characteristics remain the same. However, the orange color is replaced with a pale yellow. Also, instead of a plain dark brown outline, the outline is made with pointy arrow-like signs that resemble the “Whatchamacallit.” In this version, the Hershey logo is closer to the name and is printed in white. Instead of a plain white background, the logo has a gradient light pink color on the back. 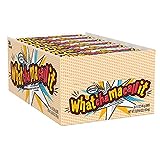 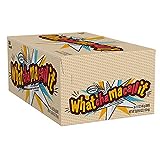 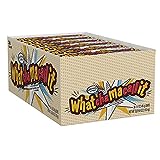 Where Can You Buy Whatchamacallit Candy Bars?

Here is a list of locations you can buy:

Here are the Ingredients of the candy bar.

A whatchamacallit candy bar may not be available everywhere today. However, if you look hard enough, you will eventually find some. They may be in your local stores, or you can always order them online. Those classic candy bars are full of flavor and have been a popular treat for generations.

It is impossible to forget its peanut flavor, crispy texture, and satisfying sensation that comes when the candy melts in your mouth. And the chocolate cover? Well, that really takes the candy to the next level.

Below, in the comments section, share your sweet childhood memories that are connected to the Whatchamacallit Candy Bar.