Ring pops are one of the most iconic and recognizable treats that you can find on the market. These delightfully fun candies are totally unique in that you can wear them on your hands as you enjoy them. This candy offers you the chance to pick your favorite color “jewel” for your ring and then wear it like jewelry until you choose to eat it!

Many people remember getting these fun rings as Halloween candy or in proposals and other kinds of fun gift-giving scenarios and the rings are no less popular today. These are still a totally fun piece of pop culture and people of all ages enjoy the fun of having this kind of candy given to them or shared by a friend. This candy has been around longer than people think and there is a lot of history behind this fun treat.

Ring pops were invented in the late 70s by Frank Richards. At the time, Richards was working as a product engineer at the Topps Company. The 70s candy was actually created as a way to stop his daughter from sucking her thumb. The original design was based on a pacifier and had a shape that was more in line with this product.

Ring pops have always been made of hard candy that is attached to a plastic ring that can be clipped onto the finger. This is not the first kind of candy in jewelry form that has been made but it has remained as popular as the candy necklace and other candy jewelry. Topps wanted these candies to be fun for boys as well, and they made sure to include colors that would appeal to boys like blue and green.

The ring pop got a huge boost to its popularity in the 80s. The catchy theme song and the catchphrase, “It’s a lollipop, without a stick! A ring of flavor that you can lick!” made a big impression on teens and kids alike. Early ads showed boys proposing to girls with a ring pop, and the theme caught on for many years of ads.

Many flavors were added in the 80s, breaking away from the original two flavors. Topps later also came out with Ring Pop gummies and some short runs of candies that were made for the holidays. Ring Pop Gummies were released in 2013, which was a soft and chewable version of the traditional Ring Pop.

There was even a version of the Ring Pop that was launched in 2011 by Bazooka and Topps that was encrusted with Swarovski Crystals and colored Maverick Blue for the Dallas Mavericks after they won the 2011 NBA Finals.

Just like the popular candy necklace and candy bracelet, Ring Pops have become associated with drug culture and raves over the years, but this is likely a very small percentage of the use of these candies for enjoyment purposes. The height of this kind of association with these candies was in the 90s and has since waned.

Most of these candies are still popular most with young children and they can be a common feature of Halloween offerings as well as being included in treat bags at birthday parties and other events for children. You can buy them on Amazon, through Walmart, or in many candy stores around the US. They are still commonly sold at grocery stores as well in some states and areas. 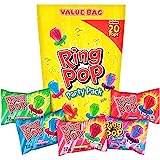 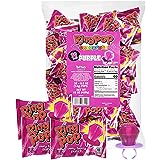 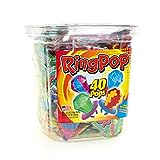 You can also buy Ring Pops at Old Time Candy by clicking the image below.

The original two flavors were Cherry and Grape. Ring Pop has added flavors over time to the lineup. The current flavors that you can get Ring Pops in are:

There have also been some sour flavors that have been added to the product offerings. These flavors are:

There are some “twisted” flavors as well now. These include combinations of Berry Blast and Citrus Craze and some creamy varieties like Strawberry Ice Cream. Holiday flavors also offer twists like replacements of the gem shape with things like a bunny as Easter candy.

The company also makes a Giant Ring Pop. This really unique candy ring offers a stated “3,500 carats of faceted bling” for your fun. This ring has a highly faceted appearance and is quite large. It weighs 40 grams and would be the same size as a 200-carat gemstone. The newest versions can be as large as 700 grams and weigh up to the stated 3,500 carats.

The plastic ring is gold in color and it is sold in most places for around $10. This is technically 47 servings of candy. This is an item that is often released as Valentine’s Day candy or as Christmas candy each year. It comes in its own large box, which makes it fit for being wrapped up as a gift.

This is the kind of item that is really made with a promposal or some other dramatic event in mind. If you want to have a really dramatic reveal moment when you give a gift, you will want to grab the giant version of this candy treat.

What Are the Ingredients of Ring Pops?

The ingredients list that is provided here comes from the Amazon entry for the 40 pack.

These are common hard candy ingredients and you will find that the calories are not as high with Ring Pops as some other varieties of hard candy in the same space. You will have to remember that these candies are quite large, however, which can mean that the ring contains more than one serving.

Ever since the commercials that show boys proposing to their female friends with a Ring Pop, videos have been taken of kids proposing to each other with the help of a Ring Pop. You only need to do a simple search for this candy to find lots of videos of prom invites and more that involve a Ring Pop.

This can be a really fun way to create memories with the help of a Ring Pop and many people take full advantage of this fun way to invite boyfriends, girlfriends, and other people who are special in your life to events.

Varieties That Did Not Become Popular

In 2019, the company decided to try something new. They created the Ring Pop Freeze, which is really the same Ring Pop but made to get cold. You are supposed to be able to shake or squeeze it and then it gets cold. Many people report that they are miserable to eat and that they make your mouth feel cold and uncomfortable as well as causing a terrible aftertaste in your mouth.

Most reviewers report that the taste of this variety is so awful that it should be banned. If Ring Pop wanted to break away from the long-term negative association between Ring Pops and raves, this strange variety did not help them to navigate away from the odd negative experience category. It is probably a good idea to stay away from this weird variety, even if you can track some down.

These sweet candies come with satisfying amounts of flavor and are actually really easy to eat and enjoy. You will get classic lollipop flavorings, even with the unique versions. The flavor lasts all the way to the center of the Ring Pop and many people find them to be delightful in their balance of sweet fruitiness.

This is a very traditional hard candy that will remind you of all of your favorite hard candies in a much more enjoyable format. The sour flavors are often just as popular as the regular pops and the balance of sour and sweet seems to be just right.

Some of the original packaging showed the old blue logo with the image of the Ring Pop at the center of the logo on a white background. The flavors of the candy were still depicted on the box but the wrappers were standard and just stated the flavor with an image of the cherry version of the candy on it.

And another from the 80’s showing the proposal scene we all remember:

An ad for Ring Pop Gummies:

When were Ring Pops invented?

Ring Pops were invented in the late 70s by Frank Richards.

How much are Ring Pops?