Bubble gums often blur the lines between candies and gum and Hubba Bubba has always been one of those made with a classic feel that is as gratifying as a candy. Hubba Bubba is a familiar gum brand for many people all over the US and even in other countries as well.

If you have always loved chewing classic bubble gums, this is the right bubble gum for you to grab. You will get a traditional bubble gum chewing experience with this product and you will love that there is so much gum in each pack. There is just something really gratifying about this kind of bubble gum and chewing Hubba Bubba will make you remember what it felt like to be a kid or you might even learn what all the excitement is about when people mention classic chewing gums.

This gum is produced by Wrigley Jr Company which is a subsidiary of Mars Incorporated candy company. The gum was first sold in 1979 and the name of the gum was linked with the military personnel saying, “Hubba Hubba” which was popular at the time to indicate agreement or approval.

William Wrigley Jr founded his company in 1891. He was a salesman and he sold soap and baking powder before he sold confections. Gum was still a novelty at this time and he found that this product sold better than the other items that he was trying to make money off of. He soon switched to selling chewing gum alone. He is credited with creating Spearmint and Juicy Fruit as well. He owned several factories and quickly started selling this 70s candy outside the US.

The gum was promoted as a less sticky version of other gums and that it was easier to get off your skin after a bubble burst. It was also promoted as a really good bubble blowing gum and that has continued to be one of the associated benefits of chewing this gum for consumers of all ages. The flavor at first release is now called “original” and it is the same type of flavor profile as other classic chewing gums that have a classic bubble gum flavor profile.

Hubba Bubba was originally supposed to be sold under the name “Stagecoach” but the name was replaced before marketing began. The now-defunct Wrigley plant in Santa Cruz, CA was the development location for the original recipe. The first TV commercial was still set in a Wild West town that featured a gunfighter who was named “Gumfighter”.

These ads stated that “Big bubble, no troubles’ ‘ and western film alum Dub Taylor would then make some kind of witty remark in reply. This was usually a reference to the less sticky nature of the gum and some targeted competitive language toward their main competitor, which at the time was Bubblicious. There was almost always some form of “shooting” sequence where the gum would be used as a weapon and the gumfighter would then peel the leftover gum off his face.

The gum was originally sold in chunk form, in packets with five chunks. It was later sold in strip form like Big League Chew. Rolls of the gum were sold in the UK in tape form. There have also been versions of the gum that have been sold in crystal form, as gumballs or stuffed with candy.

Hubba Bubba was discontinued in the US in the early 90s but then came back in 2004. US commercials at this time were linked with animation and were created at Aardman in a stop-motion manner.

This is one of the few gums that is sold in so many flavors in different places and under the same name as well. Many products that are sold in other countries are sold under different names than their US counterparts. Hubba Bubba is unique in that it has been sold so successfully under the same name in so many places and in so many unique flavors. Being widely sold and so creatively crafted has made this gum brand have staying power that not many other food and candy brands can claim.

As mentioned above, in some places, you can get Hubba Bubba in chunk form or strip form, or even tape form and it once was even sold as a soda! There have been times that the gum has also been sold as chunks even in the current bubble gum market and the crystal form that is sold in a jug persists in some countries as well.

Gums like this that are harder to chew are often sold in smaller size pieces but Hubba Bubba has not strayed far from their roots. They have continued to sell packs that offer large chunks of gum even if they are individually wrapped. This is one of the hallmarks of the brand since they still advertise the bubble creation potential of the product. If you love to blow bubbles, you need to pick this bubble gum. You will get the right material to work with to create the best bubbles ever.

The tape form of the gum has been the most popular for years in the US and this is the focus of the presence of the gum in ads these days. The gum wheels are featured in ads and are made into characters that interact with the activities that are going on during the ad. Tape gum is not that common overall and Hubba Bubba does a great job with this product. It is one of their best creations as far as unique gum and it is no wonder that it sells really well compared to the other forms of gum that are available. 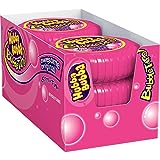 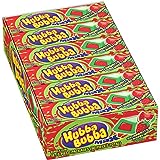 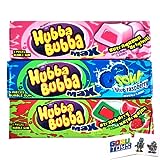 You can also buy Hubba Bubba at Old Time Candy by clicking the image below.

This is basic gum, especially when you pick the original flavor.

There might be some additional ingredients in some of the other flavor varieties.

The logo and the packaging of this product have always been bright and colorful and fun. In the 50s, there was a brief time where the wording of the logo was stark white and rendered in larger block letters. In recent times, the logo has been given a reworking and is now purple and uses bubble lettering in bright yellow.

The packs are usually pink in color and the wrappers on the inside of each pack are usually pink in color as well. There is some variety in the way that the logo appears in other countries, but the bright colors are common to most of the packaging choices. This is a fun and irreverent brand and the sense of playful fun is one of the key ways that this brand has always promoted itself.

The early ad campaigns that were created in the style of an old western were right in keeping with what was popular at the time with both children and adults. The Spaghetti Western was alive and well and John Wayne was still cranking out macho westerns that everyone loved. While the popularity of westerns has declined in recent years, there was a long stretch where westerns were very relevant pop culture references.

The current ads are focused on silly cartoons being comedic and they are much more in keeping with the way that consumers expect to have these kinds of products advertised to them. These silly ads are simple and effective and are focused mostly on the tape version of the gum that is the most popular in the US for most years. The tape wheel style gum has really stood the test of time for this brand and they use the tape wheels as their candy mascots in the ads that are run these days.

Another classic 80s ad for the product: