Fun Dip is a candy that comes in a pouch. It includes a candy-based stick and powdered candy that you dip the stick into after licking. It is a completely contained snack, everything you need is in the pouch. The candy stick is included in one pouch, and one or more separate pouches include candy powder that you can dip in stick into, then lick the candy off, and the stick is also edible. Fun Dip was originally called Lik-M-Aid, since it is a licking-based candy, although you can eat the stick itself.

Fun Dip was first called Lik-M-Aid when its earliest version was initially invented by the Fruzola Company, which eventually became Sunline Inc. Although no hard date for when Lik-M-Aid was invented could be found, its trademark information states that Lik-M-Aid had its trademark filed in 1952. Fun Dip as we know it today was named and invented in the year 1973 by the company Sunline. The reason for the creation of the newly named Fun Dip was to make an innovation for the product, that being the addition of candy sticks called Lik.A.Stix.

When its initial version was created and still called Lik-M-Aid, the candy product did not contain a stick and was eaten often by turning the pouch upside and letting the candy power fall into your mouth. Fun Dip now includes candy sticks called Lik.A.Stix, primarily white-colored chalk-like candy sticks made of sugar and with the texture of a mint.

The candy sticks included in the packages are sometimes referred to as being marshmallow flavored, and some packages say the stick flavor on it, such as lime or tamarind flavored sticks. Rumors on some internet forums have peoples memories causing them to believe that the Lik.A.Stix included in Fun Dip have been other colors rather than just white, such as pink colored, but Snack History could find no evidence of any other color of candy stick other than white candy sticks for the product.

The initial inspiration for Lik-M-Aid, which would eventually become Fun Dip, actually came from a drink mix made by the Fruzola company. This drink mix was called Fruzola Jr. and contained sweet and sour sugar-like powder that you pour into drinks.

Made around the 1940s, this drink mix was noticed by the company to be eaten by kids directly, skipping the step of pouring the powder into the drink. Inspired by an idea from it, this compelled the company to produce Lik-M-Aid so that kids could eat the powder directly from the pouch. Eventually, this idea was further built upon when the company, then called Sunline Inc, redesigned Lik-M-Aid into what is now known as Fun Dip and added the candy sticks called Lik.A.Stix to assist and enhance the process of eating the candy.

Fun Dip used to have just single and double flavor varieties available, and these were the standard for the brand. Over time however triple flavored packages became more normal, with the product containing 3 pouches of differently flavored powered candy. The powered candy itself that is contained in pouches is a form of sugar-sour powder, though its flavoring will change based on the variety, the candy powder tends to be either sweet, sour, or a combination of both. The sugar-sour that is contained in the packages can often taste much like the sugar-sour-like powder that is coated on products such as Sour Skittles.

This candy powder can take the form of many different colors, often bright and attention-getting in contrast to the tamer-looking candy stick that is included. the candy powder that is included in Fun Dip was always able or even intended to be used to dip things into and lick off, thus the name Lik-M-Aid, although the candy stick used officially with the product now did not appear to have been added until the product was re-imagined into Fun Dip in 1973.

Various flavors and varieties of this 40s candy have been created, such as Cherry flavor, Grape flavor, RazzApple Magic Dip, and Cherry Yum Diddly Dip. Newer packages include 3 flavors can have 2 sticks included in the package, rather than only 1. The original candy mascot first appeared as a nameless young boy who looked like an elf and was printed on packages back when Fun Dip was still primarily referred to as Lik-M-Aid.

The words Lik-M-Aid are still printed on the package, maybe to pay homage to the candy brand’s own history, or to highlight the similarities to its past versions. So perhaps the official name of the product could be thought of as “Lik-M-Aid Fun Dip”, though it is generally just referred to as “Fun Dip” in more contemporary times. Although the powdered candy is often considered the highlight of the product, existing long before the Lik.A.Stix were added, Lik.A.Stix themselves have developed a bit of independent popularity.

Though criticized by some for being flavorless or dull, others prefer to buy Fun Dip just for the Lik.A.Stix themselves, finding the candy stick included to be the best part of the product. A petition for Sell Lik-a-Stix separately was started, getting about 35 signatures.

Fun Dip has changed hands several times since its earliest introduction to the snack and candy market. First produced by Fruzola Company, this company seems to have become Sunline Inc and sold the candy through its Sunmark Brands division. After changing its name to Sunmark, Inc, the company acquired the company Breaker Connections in 1975, and change the name of its brand to Willy Wonka Brands in the year 1980. Sunmark Inc and its holdings were eventually acquired by Rowntree Mackintosh Confectionery of the UK, which itself was then purchased by Nestlé in 1988. In 1993, Nestle renamed the acquired company The Willy Wonka Candy Company and re-branded its products as such.

The Company That Makes Fun Dip

The company that makes Fun Dip is Nestlé, a Swiss multinational food and drink company headquartered in Vevey, Vaud, Switzerland. The Nestlé company acquired Fun Dip from its purchase of Rowntree Mackintosh Confectionery in 1988. In the year 1993, Nestlé named the company it bought to The Willy Wonka Candy Company and re-branded the products that came with it.

The Year Fun Dip Was Invented

The Company That Invented Fun Dip

The company that invented Fun Dip was Sunline Inc, which became Sunmark, Inc and first made the precursor forms when the company was still called Fruzola in the 1940s and ’50s. Eventually Sunmark, Inc would be bought by Rowntree Mackintosh Confectionery and was later itself acquired by the company Nestlé. 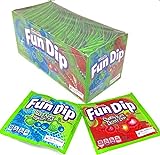 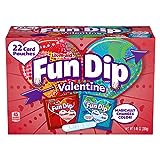 You can also buy Fun Dip at Old Time Candy by clicking the image below.

Here are the ingredients:

Check Out More Snacks And Candy!

BB Bats are a long taffy sucker/lollipop. They come in flavors such as Banana and Strawberry. Read more about BB Bats here or find out how to buy them.

Cheez-It is a cheesy cracker that is baked into the shape of a rectangle. Learn more about Cheez-It here!

Red Hots are red-colored cinnamon flavor candies that are small and round. Learn everything you could want to know about Red Hots on this page!

What is Fun Dip?

Fun Dip is a candy that comes in a pouch. It includes a candy-based stick and powdered candy that you dip the stick into after licking. It is a completely contained snack, everything you need is in the pouch. The candy stick is included in one pouch, and one or more separate pouches include candy powder that you can dip in stick into, then lick the candy off, and the stick is also edible.