Red Hots has been around for many years and it is more commonly used for decorating baked goods these days than it is for snacking. There are not many candies that can cross over into both of these categories but Red Hots can be enjoyed for both kinds of eating. These shiny little red candies are delicious and snackable and they can be used for a whole variety of different baking needs.

Red hots were first sold in 1932. They were made by the Ferrara Candy Company using a method of candy making called cold panning. Cold panning is done by slowly spinning layers onto a candy inside a pan. This process is a traditional process that is not used for many candies these days. This method makes for the really unique crunchy and shiny texture of these little candies.

These candies are technically part of the “cinnamon imperials” category that includes all cinnamon hard candy. These candies are one of the oldest of this category but they are some of the most enjoyable. These candies were originally sold in small boxes that showed the candies in a circle on the facing of the boxes with drawn-on flames and the logo amid the flames.

The same company that makes Red Hots also makes Lemonheads, Atomic Fireballs, and Boston Baked Beans candy. The packaging of all of these products is the same as the one that Red Hots are sold in. Red Hots are also sold in larger bottles that are frequently placed in the baking aisle for use for baked goods.

Ferrara became a subsidiary of the Ferrero SpA . Ferrero SpA recently purchased Nestle. This means that Red Hots are actually a part of the Nestle company these days. Nestle owns almost all of the most traditional candies that are still sold on the market today. They have been preserving the marketing appearance and flavor of other candies for generations and Red Hots will no doubt be treated with the same respect now that it has been added to the Nestle stable.

The Ferrara family who started the Ferrara company were bakers originally. When they came to the US from Italy, they actually opened a bakery first. Candy sales started to outstrip pastry sales and the family realized that there was an opportunity to make the most of this change in the market.

They started making panned candies because these were the easiest candies to make on the top floor of the small two-story brick building they built for their candy-making plant. Panned candies were much easier to make and much less costly than things like candy bars. This was a clever ploy by the family at this juncture before refrigeration became commonplace. Candy bars would melt in the summer, which meant that any candy sales that involved chocolate would not be viable during the summer months.

Items like panned candies could survive the heat of the summer and they were able to be sold year-round. This offered a profitable opportunity for the sales of candy that would not melt in the summer. When the candies that they were making had begun to make a name for themselves, the Ferrara Candy Company was made. Their direct competitor was Farley’s & Sathers who sold candies that were made in the same way.

For years these two candy companies battled for supremacy in this space. They would eventually merge in 2012 to create the Ferrara Pan Company.  This company was placed under the control of the Ferrara company.

Today the company has 7 plants that manufacture their candies. They are the largest maker of candy canes and they also make a large portion of the Jelly Beans that are sold in the US as well. This is a candy company that makes many classic candies and a lot of them are made with the classic panning style method that was first used to make Red Hots. 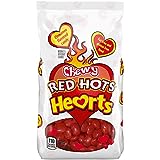 You can also buy Red Hots at Old Time Candy by clicking the image below.

Per the All City Candy Listing:

Red Hots For Baking and Other Uses

Red Hots have made a name for themselves as being yummy candy treats over the years but they have also become a classic baking topping for cookies and cakes. Many people also use them to flavor hot drinks or make other flavored items that need a little cinnamon spice. They are the perfect candy to use in this way since they are small and dissolve readily and they are a colorful addition to baked goods that need just a little more zing.

People commonly use these little candies to make flavored drinks of all kinds and you can do a simple search for Red Hots recipes and come up with so many that you might not ever get around to trying them all! The unique way that these candies are made makes them the perfect choice for this kind of use and you will get a really delicious and sweet cinnamon flavor experience when you add them to baked goods or things like hot drinks.

This candy is not sold in any other varieties but it is sold in various box sizes. The small 25 cent boxes that were the classic box style for the candy are still sold everywhere but you can also get a theater size box that is 5.5 ounces. Some locations also sell these candies in bulk and you might be able to scoop them out of a bin into a bag and pay per weight at these candy shops.

It is less common to see true Red Hots brand candies in the baking aisle these days but you can still find them in some stores. You will usually see the generic version of this candy in the baking aisle and these cinnamon imperials will not have the same sharp and spicy cinnamon flavor that the real candy does. This is one of the reasons that some people have never tried Red Hots. When you have eaten a baked good that was made with a knock-off Red Hot candy, you might be convinced that Red Hots do not have much flavor.

This is often the key difference between generic versions of this candy and the real thing and you should look for branded containers and boxes if you want to have the best flavor from your cinnamon candies that you are using for baking, making flavored drinks, or snacking. There is no substitute for the flavor that the real Red Hots can offer.

This candy has almost always been sold in red boxes that show the candies in the middle of the box. The flames behind the logo have almost always been part of the design and the white lettering that is a bit crooked here and there has been used for many years as well. The original candy was marketed based in part on its spicy cinnamon punch and the boxes were made to indicate this clearly.

You can still get this candy in boxes that look much the same as the original candy boxes. The sizes have changed somewhat and you can get bigger boxes as well as the smaller boxes that were always used in the early years of this candy’s life. The presentation of the candy in marketing materials has not changed significantly and neither has the way that they are made.

Being one of the only candies that are still made in this unique and old-fashioned way, the marketing style is carefully linked to the traditional style of this candy. Just like some of the candy bars that have not been given different wrappers since the earliest years of their manufacture this candy has a loyal following that wants the marketing of this candy to stay the same. Sometimes there is no need to change something that is working perfectly and this candy has not needed an upgrade since it was first made.

The candies were originally called Cinnamon Imperials but this was not felt to be specific enough and the name imperial had come to indicate a kind of candy that was not made often anymore. The change to Red Hots indicated the flavor profile of these candies and also helped sell people on how hot they were. This was one of the key characteristics of these candies and a good marketing move to make the switch to a more descriptive name.

A remake of the original jingle:

A classic commercial for the candies: