The spiciest of candies is the atomic fireball. It all started in 1954 when one man simply wanted to make candy with a twist. His unique idea brought about a round ball that is both sweet and spicy by design.

When you purchase atomic fireballs, they come in a tub with a lid so they are easy to just dig into. Each candy is also individually wrapped which makes the fireballs easy to stick in your pocket or your bag and take them out with you wherever you may go.

Nello Ferrara is the son of Salvatore Ferrara. He is known for being the CEO of Ferrara Candy Co. This candy is best known for their infamous pan candies, which includes the atomic fireball.

Other candies popular in the pan candy line include Lemonheads, Red Hots, and Boston Baked Beans candy. The Ferrara candy co also paired Sather’s Candy co to make some other classic candies like Brach’s, Juicyfruits, and the Now & Later.

In 2018, Ferrara’s parent company even purchased Nestle and they now handle the majority of production and distribution of Nestle candies as well.

Nello Ferrara did not join his father’s candy company right away. His father had founded the candy company in 1908. Nello graduated from the DePaul University Law School in 1942. After that, he served in the U.S. Army until 1946. He worked with Counter Intelligence Corp with pre-trial work.

When he returned from his military service, he joined the family business. He immediately started contributing to the candy industry and the Atomic Fireball was introduced in 1954. Nello’s son was inducted into the Candy Hall of Fame in 2003.

Mr. Ferrara came up with the idea of making spicy candy like the Atomic Fireball in 1954. When they originally began production, they could put out 200 cases of the candy each day. The candy took off right away and orders were quickly exceeding 50,000 cases per day – a demand they simply couldn’t keep up with.

The company ramped up production to keep up with the demands of the candy. This spicy candy that fell into their pan processing model took the candy world by storm and it’s been popular ever since.

When Were Atomic Fireballs Invented?

Atomic Fireballs were first created in 1954 by Nello Ferrara. The candies were made using their hot pan method that other candies like Lemonheads had previously been made with. They used this same method to create and prepare the Atomic Fireball as well.

Who Invented the Atomic Fireball?

Nello Ferrara is graced with created the atomic fireball candy. His intentions after joining the family candy business were that he wanted to bring invention and variety into the candy world. With that endeavor in mind, he wanted to make a candy that was both sweet and spicy.

This is where his idea for the atomic fireball came from and he put it to use with their hot pan candy process, creating a flavorful hard candy that is delightfully spicy.

What Company Owns the Atomic Fireball?

Atomic Fireball was created by the Ferrara Candy Co. At the time, it was Ferrara Pan Candy Company (formed in 1908). The company has maintained ownership throughout the years with the Ferraro family. Nello was the member of the family that created the atomic fireball. The company was started by his dad.

While Ferraro Candy Co has always stayed in the family, there have been some mergers and acquisitions along the way. The company is located in Chicago, Illinois, and is now operated under the Ferraro Group.

Atomic fireballs have been the same candy since the day they were created. They’ve continuously been made the same way and they’ve always kept the same name as well. There is just one flavor and there hasn’t ever been a need for a different flavor to be added because the classic atomic fireball is great as it is.

When Nello Ferrara first created the candy, they could produce 200 cases per day. This quickly ramped up when they started sending out samples and were getting orders of 50,000 cases per day.

The candy pieces are rotated within revolving pans where sugar, flavor, and color are added to the candy until the candy becomes what you want it to be.

In the case of the atomic fireball, they are built into a circle shape that is round and the perfect size to pop in your mouth and enjoy the fire.

If you’ve never tried an atomic fireball, you’ve never been challenged with the task of seeing just how long you can hold that ball of fire in your mouth. Can you stand up to the challenge of keeping in your mouth until it’s gone or will you have to pull it out of your mouth and take a break until the fire on your tongue subsides?

If you can make it past the first few minutes, the coating on the outside melts away in your mouth and then the flavor is not nearly as spicy in your mouth. It’s the perfect combination of spice and sweetness and it’s a true challenge to appreciate. 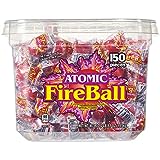 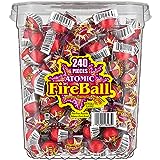 You will find that there are other brands out there that have mimicked the atomic fireball and that have even made some “hotter” options. Some of the options you might find include the Carolina Reaper gumball. The Flamethrower Candy Company has Lil Nitro and there are other spicy candies out there as well. None of them really compare or compete with the original atomic fireball.

You can look at things like gummy bears, skittles, Starbursts, and chip companies that have tons of different flavors but when you take a look at atomic fireballs, you don’t have that. It’s just a single, simple flavor and you always know exactly what you are going to get.

The only mystery or alteration is that some of those fireballs are even hotter than others. They are each unique in that while the fireball flavor is similar across the board, they are not all exactly the same. They look the same but sometimes you get one that seems almost mild and other times you get one that makes you breathe fire.

Here are the ingredients or Atomic Fireballs.

If you walk into a candy store, you will most likely find a place to purchase atomic fireballs there at the candy store. The great thing about these candies is that they are also typically available at other stores, including big box stores and grocery stores as well.

Here are a few of the major stores you might them in but keep in mind this does not cover all of the locations you might find them.

These are just a few popular stores that carry atomic fireballs but if you have a favorite grocery store or candy store near you, we recommend venturing in to look for the fireballs. They are popular and readily available at most of those types of stores. You can even find them in some gas stations as well.