LemonHead candy is a tart about the size of a gumball. LemonHead candy was first invented in the year 1962 and has become popular for its sour and sweet taste. LemonHead is vaguely shaped like a lemon and is yellow in color and is one of the oldest American candy still in production. Lemonheads pack a strong lemon flavor but are not overpowering in their taste. This is a fairly hard candy, but it is not rock-hard and contains a sugary layer around a hard center.

Lemonhead candy is a bright yellow that has a tart, sour and sweet lemon flavor. Lemonhead candy hit the American market for the first time back in 1962 and has become popular in the United States. LemonHead is produced by Ferrara Candy Company. Nello Ferrara, the company’s executive and son of the founder of the company, is said to be the one who introduced the world to Lemonhead candy. The name of the candy, Lemonhead, has its own story.

Nello Ferrara decided on the name of the candy when he saw his son, Salvatore II, just after delivery. After seeing his grandson for the first time, he realized that the shape of the face of the child resembled that of a lemon. Subsequently, he ended up naming a newly introduced candy of the Ferrara Candy Company “Lemonhead”.

As the name suggests, the 60s candy is lemon-flavored but has a sweet coating on the outside. However, there are other varieties of this candy produced as well. Other flavors of Lemonheads include apple, grape, and cherry. The names of the different flavors of LemonHead candy were originally Johnny Apple Treats, Alexander the Grape and Cherry Chan respectively.

The company claims that Lemonheads are, to date, prepared with the same processes since 1962. It employs a unique cold-panning method using real lemon juice. Moreover, it is fat and gluten-free. With real lemon juice as its ingredient, the company’s slogan stands as “Real Lemon Pucker Power”.

While the candy is impressively popular among children and teenagers, there have been certain controversies that the brand has experienced. A class-action lawsuit, led by Plaintiff Thomas Iglesias, was filed against the Lemonhead candy maker. It came as the company allegedly kept the boxes of the candy partially empty, deceiving customers into believing they were completely filled.

Lemonhead candy is packed in opaque boxes, which didn’t allow customers to visibly judge whether the box was full of candies. Therefore, the company was accused of violating the Consumer Legal Remedies Act, False Advertising, and Unfair Competition Laws of California. However, the company took exception to the allegations and decided to settle the lawsuit with a payment of $2.5 million in order to avoid expenses on ongoing litigation.

Regardless of certain incidents, Lemonhead candy maker Ferrara Candy is one of the top sugar confectionery firms in the United States. It has reached a retail value sales of 5.7% of the total market sales in its niche. This puts the company in the fourth position in the American market. As a non-chocolate candy manufacturer, the company is at the very top of the market as of 2019. LemonHead has been a lesser-known but important product to the company since the 1960s, and the company has successfully managed to market the product.

The company has engaged in a limited degree of advertising over the years for the product. Several television commercials have appeared for the product, one in the 1980s, and one of the most recent a video on Ferrara Candy’s Youtube channel. The company has also produced a video showing some of the production processes of LemonHead. The candy has also appeared alongside other candies by Ferrara in magazine advertisements.

The Company That Makes LemonHead

The company that produces LemonHead is the Ferrara Candy Company. The company is an American candy manufacturer owned by Ferrero Spa, an Italian manufacturer of chocolate and confectioneries.

How LemonHead Got Its Name

The Year LemonHead Was Invented

Here is a list of different flavors, varieties, and spin-offs of LemonHead:

LemonHead tends to vary its packaging style, sometimes using a cardboard box that is longer vertically, and sometimes the package is longer horizontally. LemonHead likes to make use of cardboard packaging, but will sometimes make use of plastic packaging. Often times the Lemonheads that are contained in the package are not individually wrapped, but individually plastic-wrapped LemonHeads do exist. Large bags containing a smaller variety of packs of LemonHeads have been produced.

The standard version of LemonHead tends to have yellow packaging, to help ram home the point that these candies are lemon flavored. Other varieties of LemonHeads have different colored packaging. Chewy LemonHead has red color packaging, and so does CherryHead, the cherry-flavored variant of LemonHead. The packaging art for LeamonHead tends to have the name “LemonHeads” in squiggly writing in the center or top-left of the package. An exception to this is the packages that are vertical in nature, which tend to have a reverse U style when it comes to the “LemonHead” name being printed on the package.

LemonHead always has a smiling face on the box art, the face is usually a lemon, but the smiling face depicted can also be an apple or whatever fruit the main flavor tends to be for the package in question. In addition to the smiling face in the shape of the fruit that the box contains, the box art generally contains pictures of the fruit for the matching flavor of the candy within the box; Such as a picture of a lemon on the original LemonHead flavor packages, or a picture of an Apple on an AppleHead variation of LemonHead.

In the 1980s, the Lemonhead advertising style was largely sports-centered. The commercials featured different children’s sports teams. One team would have an advantage over the other, thinking they are going to score. Then, one player would make a mistake and be deemed as a “lemonhead.” Everyone then proceeded to eat a Lemonhead.

During the 2010s, Lemonhead released at least two television commercials with Crossbar TV that featured hockey players Patrick Kane & Jonathan Toews. The sports theme was still incorporated, however instead of a player making a mistake the Lemonhead logo would score.

In 2014 Lemonhead re-branded themselves debuting an older, less adorable lemonhead. The Ferrara Candy Co., the owners of Lemonhead, received criticism from consumers and several media outlets. As of 2019, Lemonhead uses its official social media accounts to advertise and interact with consumers.

I first ate LemonHead candy when I was 5. My father would pick them up for me as a treat on occasion. I actually didn’t like it at first. The sourish lemon taste was too much for me to handle as a kid. But my dad kept buying them, and I tried them a few more times.

Eventually, I found myself getting used to the taste and liking them. After that, I was addicted to things. They are the only way I can get my lemon-sour fix whenever I get that craving. I eat them as an adult now, candy is for grown-ups too after all. I always look back fondly on LemonHead as one of the first candies that I was introduced to as a child. 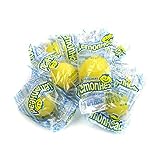 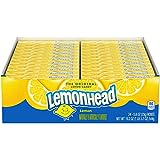 You can also buy LemonHeads at Old Time Candy by clicking the image below.

Here are the ingredients of LemonHead Candy.

Watch some commercials for LemonHead candy:

Cheez-It is a cheesy cracker that is baked into the shape of a rectangle. Learn more about Cheez-It here!

Dunkaroos is a snack consisting of cookies that you dunk into the frosting. Check out this page to learn about Dunkaroos or to buy Dunkaroos online.

Fruit by the Foot

Sprite is a lemon-lime flavored soda that is popular with teens and adults. Sprite is known both for its fresh, crisp, taste and branding.