Ovomaltine is the world’s most popular chocolate powder that is used in various drinks and desserts. Once Ovomaltine hit the European market, it became a hit and quickly reached markets around the globe.

Here is the complete story of Ovomaltine and how Switzerland’s biggest export became a worldwide hit. From being developed in Switzerland as a cure for malnutrition then being marketed as a sweet treat and sold nearly everywhere.

How was Ovomaltine developed?

Ovomaltine began being developed in 1865 by a Swiss pharmacist named Dr. Georg Wnader. Dr. Wander saw during this time that there was an epidemic of child mortality and malnutrition in Switzerland during this time.

Dr. Wander would pass away before he perfected his nutritious malt powder, but his son Albert would continue his work. Albert continued to develop the power nutrition powder and continued to perfect the recipe.

After perfecting the recipe, Albert Wander would introduce Ovomaltine to the Swiss market in 1904. In the beginning, Ovomaltine was sold in Swiss chemist shops as a medical preparation supplement.

A chocolate flavored powder that is nutritious and good for you instantly became popular within the country. Within just two years, Ovomaltine was one of the most popular drinks in Switzerland.

This popularity would lead to Ovomaltine being exported to other countries in Europe shortly after its release.

The success of Ovomaltine in Europe

After becoming incredibly popular in Switzerland, Ovomaltine would also become popular in Europe just a few years after the initial release. Especially in the UK, where the population fell in love with the chocolate powder when it arrived in 1909.

Six years after Ovaltine (Ovomaltine) was released in the UK, a factory had to be built to meet the demand there. The first Ovomaltine factory outside of Switzerland would be located in Kings Langley.

This factory in Kings Langley would also export their product to other countries. Including the US, where Ovaltine was introduced onto the market there in 1915.

By the late 1910s, Ovomaltine was a hit in numerous markets from the UK to the US. The demand for the malt powder was at an all time high and the Wander AG company needed to meet the demand.

This would mean that they would have to open more factories in different countries. In the US, the first Ovaltine factory in the US opened in 1917 in Villa Park, Illinois.

Another factory would open in Peterborough, Ontario in Canada to meet the demand in the Canadian market.

With the continued success of Ovomaltine, the Wander AG company wanted to start making other products under the product’s name. The first variation of the malt powder released would be one without malt called Rich Chocolate Ovaltine.

Later on, Wander AG began releasing Ovomaltine candy bars and eggs. Also releasing another type of treat that they would call PDQ Chocolate. A brand that was very popular from the 1960s to 1980s that produced drink mixes, choco chips, and eggnog.

There have been a few different acquisitions over the years of the Ovomaltine brand within Europe and the US. Within each country, a different company owns the rights to sell and distribute the product.

For the longest time in Europe, the rights to Ovomaltine were owned by the Swiss company Novartis. The company’s food and drink’s division would be bought by Associated British Foods, who still owns the distribution rights in Europe.

In 2002, the Himmel Group would sell the rights to Novartis. Then in 2007, Nestle acquired Novartis’ medical and nutrition division, which included the rights to Ovomaltine in the US.

When Ovomaltine was being first exported to the UK, a spelling error was made on the shipping documents. They spelled Ovomaltine as “Ovaltine” on this document.

The name was catchy, so they decided to keep the name Ovaltine as the product in English markets. As of today within the UK, US, and Australia, the malt powder is still known as Ovaltine.

Much of Oveltine’s(Ovomaltine) success has been thanks to the fantastic marketing campaigns. Especially within the UK and the US, where Ovaltine was widely advertised on radio broadcasts.

These commercials would advertise to kids and promote radio promos to get secret Ovaltine decoder rings and pins.

In the UK and the US, there was another famous radio show actually named after the product called “The Ovaltineys. Airing from 1935 to 1939 before stopping production due to the start of World War 2.

The Ovaltineys also featured a famous radio jingle by the Beverley Sisters that everyone of the time knew.

How did Ovomaltine get its name?

How Albert Wander came up with the name Ovomaltine by mixing two of the main ingredient’s names together. Those two ingredients of course being eggs and malt, but instead of eggs they used the Latin word for eggs ovum.

Mixing the words malt and ovum together would make the name Ovomaltine, which is the name Wander stuck with.

The original Ovomaltine was advertised as just having milk, eggs, and cocoa powder. Since then, the recipe has changed multiple times and not all countries use the same one.

For example, the recipe used in the UK and India no longer contains eggs. Other places like countries within South America still use eggs in their Ovomaltine recipes.

In Brazil, Ovomaltine has been one of the most popular treats for over 70 years. The Brazilian capital of Sao Paulo is home to the second biggest Ovomaltine factory in the world.

The Brazilian fast food restaurant chain known as Bob’s has made milkshakes and sundaes with Ovomaltine since 1959.

When McDonald’s arrived in Brazil, they would also begin making their milkshakes with Ovomaltine like Bob’s.

One of the big questions around ovomaltine since it has been marketed is the claim of the powder being nutritious. The answer is actually yes, the chocolate malt powder does have nutritious benefits.

It has a good source of vitamin D and calcium to boost bone strength. Also the vitamins A, C, and E to to support your immune system.

The only downside to Ovomaltine is that it does have a high amount of added sugar in the powder. But it does in fact have nutritious qualities to the malt powder.

Since Ovomaltine has been sold and exported throughout the world, there have been various other Ovomaltine products created. Here is a list of some of the more known products that have been released. 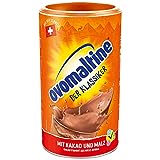 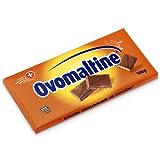 Ovomaltine isn’t the only malt or milk powder that is sold in different markets. It does have a few competitors that are sold internationally.

Over 100 years since Ovomaltine and it is still the most popular chocolate malt powder in the world. It’s available on just about every continent in the world and now has numerous products that are made with Ovomaltine.

Whether you know it as Ovomaltine or Ovaltine, you know what it is and maybe even enjoy the drink or candies. It’s been around since we were kids and will most likely still be around for years to come.