When people talk about popcorn that can be eaten on the go, they always talk about Smartfood popcorn. This tells you how completely the company has met its original goal of sweeping away the low-quality and tasteless cheesy popcorns that were sold prior to the creation of the Smartfood brand. Smartfood has become the standard for delicious popped corn treats over the past 20 years and the quality and standard of production that the company upholds is a big part of the reason why.

If you have ever purchased a bag of cheap popcorn that has flavoring on it, you will realize immediately that it does not hold up to the standard that you might have been hoping for. Traditional snack popcorn was always an odd color, strangely flavored and hard and rubbery. This image plagued snack popcorn treats for years-that is until Smartfood came on the scene. Smartfood truly changed the snack world for the better and paved the way for other healthy snacks that were popcorn-based.

This company was created in 1985 by Andrew Martin and Annie Withey. They were the original CEO and VP of Consumer Relations for the new company. The company was based in Hampton, Connecticut at the beginning of its life and was marketed under this registered brand name from the start.

The first production and manufacturing location was Marlborough, Massachusetts which allowed the product to be brought to the market with the help of the Yandow family. Martin and Withey wanted to erase the bad image of popcorn treats from the consumer’s mind. Up to this point, popcorn treats had been strange colors and had been offered in odd or tasteless flavor varieties.

Pre-popped popcorn in a bag had a connotation of cheapness that the company needed to overcome. Because popcorn is cheap and easy to produce, the product was the perfect choice to make for an affordable product to create, so long as it would sell once it hit the store shelves. The company had done its research correctly and they knew that many thousands of Americans were popping their own popcorn many times a week. Surely they would want an easier way to have fresh popcorn at any time of the day!

The popcorn was developed in Ann Withey’s kitchen and after months of testing different ingredients and flavoring options, the perfect balance of popcorn goodness and cheesy yumminess was achieved. Ann’s husband coined the name of the now well-known treat by saying that this was a really smart idea for snack food. Smartfood was born and was well on the way to becoming everyone’s favorite snack food.

When distributors took the first batches of Smartfood to sell, they did not realize that it would fly off the shelves. A new category of snack had been born and the lay of the snacking land would never be the same. Despite the black bag that was ridiculed by marketing experts, the product was almost an overnight success.

Some original stumbles affected early popularity and profits and the company was not able to solve moisture issues in their product until they moved out of the former peanut processing plant that they had launched the product in. The product was being handed out for free at sporting events and other large venues by now, and it was catching on.

The eventual sale of the product to Frito-Lay in 1989 followed on the heels of a contentious breakup of the original board and a fight between the original developers of the brand. Withey and Martin, who had married, decided to open Annie’s Homegrown which focuses on macaroni and cheese and organic products but they have few good things to say about the way that the brand was handled once there were disagreements between the original investors and the board.

Frito-Lay has taken the smart snacking plan and run with it, adding lots of different flavors to the Smartfood lineup. The snack is the first name that anyone thinks of when popcorn snacks are mentioned.

The Smart 50 lineup was created to make sure that you could snack on your favorite popcorn treats at 50 calories a cup or less. Frito-Lay’s addition of the Krispy Kreme variant of the popcorn snack in 2021 after years of demands for this kind of flavor match up. This is a limited-time flavor that can be bought at Sam’s Club locations and some other select outlets. 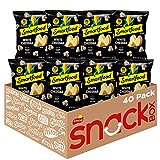 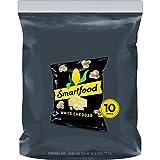 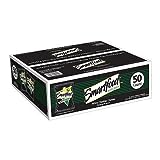 The ingredients in this list were taken from the company’s homepage for the original popcorn in White Cheddar flavor:

The bag boasts 2.5 servings and 160 calories each, which is excellent when compared to other snack foods. Sodium comes in a little high at 240 mg but the cholesterol in each serving is low and you get a lot of fiber and healthy carbs from your servings of Smartfood Popcorn. This is one of the main reasons that this snack has been such a big success. This is a much healthier option overall than any of the chips and other kinds of sweet snacks that you might pick to get you through the day between meals.

*The % Daily Value (DV) tells you how much a nutrient in a serving of food contributes to a daily diet. 2,000 calories a day is used for general nutrition advice.

Smartfood Popcorn has always focused on the smart snacking properties of its product. One of the long-term slogans has been “smart from the start”. The current ad campaigns are clearly targeted at younger people and they include people eating the snack to beat other players at chess and to solve big problems with ease.

This is a tried-and-true way to connect with people who eat products like this. Everyone wants to feel like a snack will help them to stay clear-headed and ready to work or focus on projects. This is the platform that has made Snickers such a success and healthy snacking is an increasingly large part of the market for snack items that are healthy for everyone to eat.

Being able to grab a bag of something that you can carry with you that will not impart unnecessary sugars and added empty calories is still the focus of Smartfood Popcorn ad efforts and outreach and they can stand by this promise, especially when you consider the original flavor option.

Smartfood Popcorn would not tell you that they are targeting women as their premier clients, but most of their ads are aimed at females and you will see that there are various snack variants that seem to be designed to look appealing to women more than to men. It is a fact that many women are motivated by calorie-reduced snacking options and this is a great place for Smartfood to focus its efforts.

Smartfood Popcorn has tried to find the balance between flavors and options that will appeal to all ages while simultaneously targeting younger people and specifically younger women featured in their ads and their campaigns. This is a great snack for these areas and the performance of the product has likely shown them that they will have the best results when speaking to these groups.

Studies show that women consume more snacks per day than men. The same studies show that women try to focus on snacks that have better ingredients and offer more healthy components. Men are not as invested in healthy snacking options per these studies. Popcorn is a great on-the-go snack and women have always been motivated to enjoy this kind of treat when compared with less portable snacks. The benefit of popcorn snacks is also that they can easily be shared with young children, which can make this a great snack choice for moms on the go.

A lot of the recent work on the ideal caloric content of snacks shows that you should get about 200-300 calories per snack. This is one of the reasons that Smartfood Popcorn has taken over such a large share of the market for these kinds of snacks. Each bag of this snack falls right into this category and you will get lots of great carbs and other necessary nutrients from this snack when compared with candy and sugary snacks.

Smartfood Popcorn also makes a really great case for itself by being comprised entirely of natural ingredients. The push for reduced unhealthy ingredients in snacks has led to the perfect environment for popcorn snack foods. There have been more of these kinds of snacks entering the market of late but Smartfood is still superior to many of these other options.

Ad for the new bag look:

One of the newer ads aimed at younger people: