General Mills has always been creative and they have been known for unique and memorable cereal products that have caught the imagination of adults and kids alike. There is no shortage of fun products that General Mills has made over the years, and the Monster Cereal series has been one of their most popular and memorable product lines. The original Monster Cereal Series included Count Chocula, Franken Berry, and Boo Berry.

If you have had any of these cereals, you know how yummy and fun they are. Even though these cereals are not sold year-round anymore, you will still be able to get your fix during the Halloween and fall seasons. Count Chocula has long been one of the most beloved cereals that General Mills makes, and you will never regret picking up a box of this chocolatey treat.

Count Chocula was developed during the height of the monster movie craze in the 70s. The cereal was originally released with a cartoonish Count Chocula on the boxes and the ad campaigns often featured verbal sparring between Franken Berry and Count Chocula about how scary they are. They usually also got together and scared some children at the end of the commercial.

The cereal was released in March of 1971 and they were a huge hit. Count Chocula was just as popular as Franken Berry and both kinds of cereal were advertised to make your milk chocolate milk or strawberry milk. Franken Berry cereal became associated with Franken Berry stools due to a dye that did not break down in the digestive tract. This dye had to be removed from all of the varieties of the cereal due to this issue, including Count Chocula. Once the Franken Berry stool mystery was resolved and the dye was removed, it led to a reform in the way that dyes were handled in foods all throughout the US.

Boo Berry and Fruity Yummy Mummy joined the lineup of monster cereals and then were discontinued a few different times over the life of this cereal design. Count Chocula has been the only cereal of the monster lineup to be sold continuously until 2010, then the cereals were retired to be seasonal for the Autumn/Halloween season.

General Mills released all the monster cereals, including the short-run Fruit Brute together in 2013 and they have also redesigned all the boxes with the help of DC comic artist Terry Dodson in 2014. There are currently plans to release a 50th-anniversary version of the cereals in 2021 that will be offered as a combined cereal called Monster Mash.

Count Chocula and the other Monster cereals were always associated with posters, stickers, paint sets, cars, parachutes, and vinyl figures that were included in the boxes or that could be purchased for a discount after you used a proof of purchase and coupon that was included in the cereal. While boxed cereals are not as strongly linked with giveaway items and toys that are included in the boxes, this part of the marketing of the cereal was very central to its success for years.

Count Chocula was a Dracula-like figure who was represented all in brown on many of the boxes of cereal and in the advertisements, which were cartoons. Count Chocula was actually voiced by Bella Lugosi for some of the original ads and the link between classic vampire myth and this fun cereal mascot was secured.

Count Chocula was actually named Alfred, while Franken Berry was named Frank. Because of the connection to Bela Lugosi’s famous line, “I vant to suck your blood”, Alfred would say, “I vant to eat your cereal” in the ads that he appeared in. The tagline followed the cereal for many years and has continued to be associated with the brand.

Count Chocula verbally sparred with Franken Berry in many of the advertisements and they would argue about who was the most frightening. At the end of the commercial, the two would gang up on children and scare them or sometimes the child would scare the monsters instead.

The original scripts for the monster mascots were worked on for two years because General Mills was worried about them being too scary or not welcoming to children. This paid off as the mascots were a huge hit in 1971 when the cereals were released. There were some hiccups along the way to do with the representation of the cereal related to the image of count Chocula.

In 1987, General Mills faced criticism from Jewish groups who said that Count Chocula boxes featuring Bela Lugosi also showed the Star of David. Jewish groups protested and said that this kind of religious iconography should not be appearing in connection with a vampire. General Mills did apologize but did not recall the boxes that were involved in the complaint.

They did not feel that they should have to recall the boxes because the actual medallion that was shown in the boxes was a six-sided medallion that appeared in a film with Bela Lugosi in it. These boxes are now worth a lot of money and when they show up for sale on eBay, they often sell for $100 or more. 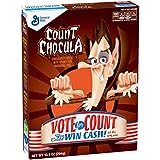 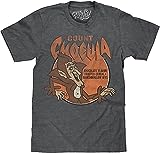 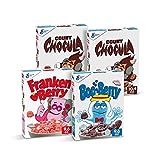 From the Amazon entry for Count Chocula cereal:

The first Count Chocula was drawn by George Carn, who also drew the Trix Rabbit. The first images offered the same general cartoon style as the famous Trix Rabbit. This cartoony style was readily linked to General Mills at this time and it was part of their marketing style.

Count Chocula was redesigned many times over the years but recently has been given a fresh makeover by Terry and Rachel Dodson who worked on DC’s Wonder Woman and Marvel’s Spider-Man. The Count is much scarier looking these days than he was at the beginning of his life, but he still looks like the old Count and is instantly recognizable.

There have been various additional products made for the cereals, including Fruit Roll-ups and candies. These other varieties of items were never long-lived, but there have been various additional products that have been made over the years as companion products to the classic cereals. Count Chocula has not been as involved in these added products as the fruity varieties of the monster cereals, but Count Chocula is one of the most familiar characters so he often appears on the packaging even if there is not a chocolate-flavored fruit roll-up being sold in the box.

Originally, the cereal had cross-shaped pieces inside the boxes and there were no marshmallow pieces included. You will find that the modern boxes have puffed cereal pieces as well as marshmallows that are shaped like the characters for the variety of the cereal.  Count Chocula has also included bat marshmallows for many years along with character-shaped pieces.

One of the most recent ad campaigns that General Mills ran for Count Chocula was the Hollywood competition for the mascot. They made a website that was called WorkWithTheMonsters.com which asked Hollywood to help them to create a movie, short film, or other media that would give a fresh voice and style to the Monster cereal line.

This was done in the hopes that there would be new and creative ads made for the mascots in large numbers. These kinds of ploys also offer publicity for the cereals, which can help to make the cereals stand out to the public as well.

A classic ad that features Franken Berry and Count Chocula: