Now and Later candy is a classic candy that has always been a winner. It’s this hard square of candy that reminds you of a starburst but isn’t as juicy. It’s sweet and flavorful and most certainly a one-of-a-kind candy when you compare it to other options out there.

Let’s take a walk through memory lane and learn all there is to know about Now and Later candy.

Now and later candy has always been a winner. It’s this hard square of candy that reminds you of a starburst but isn’t as juicy.

In the early 1970s, there was a candy shop on Manhattan’s west side. This candy store sold all kinds of candies from chocolate bars to gumballs and hard-boiled lollipops. The owner of this small business had been selling his goods for years but wasn’t seeing much success until he came up with a new idea: Now and Later candy.

Now and Later was a revolutionary type of candy because it looked like any other hard-boiled lollipop but had one big difference: its delayed flavor release. Now and later is the perfect name for this unique candy because if you put it in your mouth, there’s no immediate taste or pop of flavor. You wait and wait and then when you least expect it, the flavor is released.

This 60s candy became an instant hit in New York City with people buying them for their kids to enjoy during lunch breaks or after-school snacks. It wasn’t long before Now and Later was sold across America at convenience stores everywhere. There are still some small shops that sell Now and Later candy today but it’s mostly found at gas stations, corner stores, or small shops.

The concept behind the name was all about how a person would like it now and definitely want some more later, hence the name Now & Later. Another funny tagline about the name was that if you put one in your mouth, you could still be chewing it later because they are so deliciously chewy. It’s certainly a play on words.

Farley & Sathers Candy Company purchased Nabisco, including this candy in 2000 and then in 2012, Kraft/Phillips Morris acquired Nabisco. Finally, Now & Laters came to rest with the Ferrara Pan Candy Company and they remain the distributor of Now and Later candy today.

Originally, the candy came in a small leave of the various cubes, much like what we know of Starburst candies. They are very similar in overall design and packaging but not so similar as a candy treat.

Of course, the Now and Later candy has evolved over time. They still have their traditional hard but chewy candy square that remains popular but they also now offer a variety of chews. These come in a lot of different flavors, including a line of sour flavors as well.

Another fun fact for you. Now and Later candy was actually meant to be a gum replacement. It is a long-lasting chew and while you don’t chew it like you would a piece of gum, it does typically last a long amount of time and is chewy and juicy.

They’ve come out with a lot of different flavors over time. In fact, even the original sleeve or bar or Now and Later offered up to 14 flavor varieties, which is pretty phenomenal for such a simple square of candy.

When Was Now and Later Candy Invented?

Now and Later candy was all the rage when it came out. It was purchased or available in a sleeve, or what they referred to as a bar. So, it was almost like a candy bar but it had multiple pieces, allowing you to enjoy one now and then more later. Or share some with your friends both now and later too.

It’s a pretty unique concept and it made this candy a hot item when it first came out in 1962. They were introduced by the Phoenix Candy Company at this time. As mentioned earlier, they did change hands several times and passed through many well-known names, including Nabisco, Beatrice Foods, and Kraft. They now are distributed through the Ferrara Candy Company.

The candy “bar” had sometimes up to 14 flavors in them and they were more popular because you could savor some now and enjoy the rest later. The candy really lived up to its name and was always a big hit for this reason.

Each piece of candy is individually wrapped in a specific color related to the flavor of the candy. While at the time you could find about 14 flavors, there are currently 16 different flavors on the market for Now and Later candy.

They’ve also expanded over the years to add a chew, which is not quite as hard as the traditional variety. When Now and Later was invented, it was created to be a long-lasting chew that could imitate or replace gum without actually being gum.

Who Invented Now and Later Candy?

We don’t really have a name or a history of a person who worked for years to create the perfect candy. For the creation of Now and Later candy, we simply know that it was introduced in the U.S. market in 1962 by the Phoenix Candy Company.

The candy started its journey in Brooklyn, New York in a small little candy shop there. New York is really where the candy got its start and remains the home base of the candy with endless possibilities and enjoyment from the Now and Later.

Of course, since that time, the Now and Later candy has become a favorite throughout America. It’s easy to find at convenience stores. Parents loved giving their children a treat to enjoy during their lunchtimes or perhaps even after school.

The Phoenix Candy Company certainly came up with a popular winner by creating a candy that could be enjoyed and last a long time. You could simply savor the candy and have some for later when you are ready to enjoy another piece rather than eating it all at one time and then having no more!

Who Owns Now and Later?

Now and Later candy has changed hands quite a few times through the years. Their current ownership falls under the Ferrara Candy Company. The original owner was the Phoenix Candy Company.

After Phoenix, it was owned for a short time by Beatrice Foods in 1978. Beatrice Foods merged with Leaf in 1983. Leaf sold to Nabisco later on in 1992 and Farley & Sathers Candy Company bought it in 2000.

In 2012, Nabisco was acquired by Kraft under the guide of Phillip Morris. Later, they merged with Ferrara Pan Candy Company and then they changed their name to Ferrara Candy Company and that is where the ownership of Now and Later remains on the market today.

How Did Now and Later Get its Name?

Now and Later has a name that really stands for the candy and the intention of the candy as a whole. It was given the name with the slogan, enjoy some now and when you want to later. There were also some funny sayings about enjoying the candy now and still chewing it later.

The candy is a long-lasting chew so it’s not something you’re going to pop in your mouth and chew up in 2 seconds. It was created with the intention of being a replacement or alternative to gum.

It’s both hard and chewy, which leaves it to be long-lasting overall.

There have been different flavors over time. Originally, the bar of Now and Later had 14 flavors. Currently, there are 16 flavors on the market. Here are the flavors you can find now.

In each of these flavors, you will find that they have their original bar, which is the sleeve of individually wrapped squares of candy in a variety of flavors. These might also be available in single flavors as well. 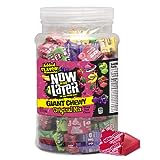 Here are the ingredients for Now and Later Candy which were taken from the official website.

Pictures of Now and Later Candy

If you need to know where you can buy Now and Later candy, you find a great resource on the Now and Later official website. They have a where to buy section that tells you stores near your location and also gives you a variety of online shopping to find your resource.

It’s available at a lot of candy stores as well as grocery and convenience stores. You can also find it pretty easily online so you can get your fix.