If you love classic candies, you probably already love Turkish Delights. These are some of the most traditional candies of all, but what if you could enjoy them with chocolate at the same time? This is the principle of the Fry’s Turkish Delight, and it has made this unique candy popular since the early 1900s.

There is a very specific taste to a Turkish Delight, so you should probably learn more about how these kinds of candies taste. You will want to be prepared for the unique flavor at the center of this candy before you order a bunch of them. The history of this clever little candy is also really unique, which means that you might want to find out more about them before you order a batch.

A Turkish Delight is a classic confectionery item, the origin of which is not well-known. The treat has been around since the Ottomans made it popular. Most versions of this sweet are made with a soft, rose-flavored center that has hazelnuts of dates on the outside. The unique gel-style texture of the sweet is what makes it fairly unique, and it certainly made it unique at the time that the treat was made popular.

Other traditional flavors of this sweet are bergamot orange, or lemon. The rose-flavored version of the sweet is the most common, and it is the flavor that most people think of when they think of a Turkish Delight. If you do not like rose flavoring, this might not be the sweet for you. However, the exterior flavoring offered by the nuts or dates can help mellow the rose flavor some.

The confection has always been made from sugar and syrup and cornflower that is warmed over low heat. This makes the gelatin soft enough to form into cubes which are then dusted with icing sugar or rice flower. The final step is not used for the Fry’s Turkish Delight since it is dipped in chocolate. The traditional sweet would be more familiar to those who like to eat rice candy, but it is otherwise not like any other gelatin candy.

In the US, most people are familiar with the Turkish Delight due to the mention of it in The Lion, The Witch, and the Wardrobe. This was the candy that the White Witch offered to Edmund to make him willing to hurt others to get it. Most people in the US have never tried this candy because it is not marketed outside of European markets very heavily, but you can order various versions of the sweet if you want to give it a try.

Fry’s Turkish Delight is made by Cadbury. This is one of the older candy makers who are still in business, and they offer up a lot of really classic candies that are not made by other companies anymore. This candy has been around since 1914 when it was first sold in the UK. The company that was making the product at that time was J.S. Fry & Sons.

The candy has always contained a rose-flavored Turkish Delight at the center of an exterior chocolate layer. The chocolate layer is milk chocolate. Joseph Fry was a Quaker who was born in 1728. His family began making chocolate in 1759. The original products that they made were intended for medicinal use, as were many candies at this time. Candies as a form of enjoyable food was not a concept that was entertained until the late 1700s.

When “eastern” candies started to be brought to the UK through trading with other countries, the Turkish Delight became an instant hit. This has been one of the most lasting candies from this period, and the Fry & Sons company added them to the lineup of chocolates that made them well-known. Such was the popularity of the sweet that it was worth selling to a larger company to continue its success. Fry & Sons merged with Cadbury in 1919, at which time this became a candy that was most closely associated with Cadbury in its early years.

The Fry’s Turkish Delight is also sold as min-Easter eggs during the Easter season, and there is also an ice cream product, as well as block chocolate bars. In Ireland, Cadbury sells Dairy Milk Turkish, which is made with the Cadbury Dairy Milk Chocolate used in the bar by the same name. The Turkish center of this bar is also made with a slightly different texture and flavor than the rose flavoring of the traditional candy.

The UK market recently enjoyed added Ice cream and Crunchie products with the Fry’s Turkish Delight flavor. As of August 2010, the recipes were also changed in the UK to remove E129 Allura Red AC and to replace it with natural E160a carotenes and Beetroot Red. The New Zealand market sells the same products with the original artificial colors.

One of the odd things about this candy product is that the slogan that was set in the 1950s, “Full of Eastern Promise” has continued to be used ever since. This problematic slogan seems like one that should be changed, but so far, Cadbury has stuck to the slightly questionable slogan in advertising for this product. Since the candy is not sold in any great quantity in the US, these ads are not shown to the US market.

Many of the original ads focused on women in what was supposed to be Bedouin in nature. They usually danced and frolicked and then got given the candy as though it were some kind of medicine or secret item that would provide youth or other magic. The association with some kind of magic foreign item has always been part of the marketing of this candy, even until today. There is actually no link between the Turkish Delight and Eastern mysticism, but the ad campaigns acted like there was.

The Fry’s Turkish Delight is wrapped in a purple candy wrapper that is shiny, and the word, “TURKISH” is stamped on the middle of the wrapper. The wrapper states, “Full of Eastern Promise” on the top right corner. The “fry’s” name is on the left side of the wrapper, and the word “delight” is at the bottom right of the wrapper. Some wrappers also state, “As grand as ever”.

The wrapper is a bit reminiscent of the Willy Wonka-inspired products Like the Wonka Bar. Some very classic candies have been marketed with this kind of wrapper, so this is a good livery choice to attract those who love this kind of treat. This is also a more popular wrapper style in the UK and in Australia as compared to other wrapper designs.

This candy is sold in all the markets in this livery, which is a unique bit of consistency for a candy that is distributed in numerous markets. This makes online orders consistent, which can be nice if you are looking forward to getting a candy bar that looks just like you expected when it arrives. 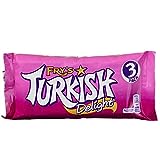 There are various products that are made with the Turkish Delight flavor by Cadbury. Not all of them are sold in every market that offers Fry’s Turkish Delight.

The regular Fry’s Turkish Delight is also sold in block form for those who are looking for a more classic chocolate candy bar. This treat is also sold in small boxes like a classic boxed candy. This is in keeping with the theme of this treat since it is a classic candy through and through. If you love boxed candies, you might have to work a bit harder to get your hands on the boxed candies as they are not as commonly sold.

This is the ingredient list for Fry’s Turkish Delight rose flavor. This is the original treat recipe but there are various versions with different flavors:

The recipe will differ slightly from the other flavor options. This recipe might contain nuts, eggs, and soy.

A classic ad that leans on the eastern origins of the treat:

A unique ad from the 80s that was not shown in many markets: