Quaker Oats introduced Quisp, a sugar cereal that had a flavor similar to the iconic Cap’n Crunch, in 1965, and it was on the market nationwide until the late 1970s and then again in 2012. Quisp cereal was introduced with a sister cereal called Quake, which also had a fairly short life on the market, thanks in part to Quisp.

The ads were cartoons that featured the Quisp and Quake characters competing against each other for which was the best breakfast cereal. Quisp’s mascot was an alien who claimed he was the Crown Prince of Planet Q. Quake’s mascot was a muscular miner. Both were cartoon characters created by Jay Ward, who also created popular animated favorites including Rocky and Bullwinkle and Dudley Do-Right.

Voices of Quisp and Quake

Daws Butler eas the voice of Quisp and William Conrad was the voice of Quake. Butler had a long career as a voice actor, creating more than 50 characters for TV and film. He worked primarily for MGM and then for Hanna-Barbera, playing the title roles in “The Huckleberry Hound Show,” “The Quick Draw McGraw Show,” and “The Yogi Bear Show,” as well as a variety of other characters. Quisp wasn’t his only cereal character. He was the voice of Cap’n Crunch for many years. Later in his career, Butler began to train other voice actors in the craft. One of his most notable protégés was Nancy Cartwright, the voice of Bart Simpson in “The Simpsons.”

It might be surprising to hear that William Conrad, who became a well-known live-action actor, was the voice for Quake cereal. But that was not his first or only foray into voice acting. Conrad got his start in radio and estimated he played more than 1,500 radio characters over the years. On television, he was best known for playing the lead character in “Cannon.”

Quisp and Quake were linked in television commercials, though they were not exactly partners. The commercials typically pitted the mascots against each other, asking children to vote for their favorite, either by flavor or by best promotional giveaway. One of the slogans used for Quisp called it “the biggest selling cereal from Saturn to Alpha Centauri.”

In 1969, Quake’s miner character got a makeover, but that didn’t do him a whole lot of good. In 1972, the commercial competition culminated in a major duel: Whichever cereal got the most votes would stay on the shelves. The other would be discontinued. That was the end of Quake. The victor, Quisp and the Crown Prince of Planet Q, prevailed.

But Quake wasn’t completely out just yet. He got the chance to introduce a sidekick, and a new cereal and mascot. Meet Simon, an orange kangaroo, and his orange-flavored cereal called Quake’s Orange Quangaroos. In yet another breakfast cereal competition that might remind you a bit of “The Hunger Games,” Quaker once again held a life-or-death competition. This time, Quisp was up against the Quangaroos. Quisp once again won the battle for the grocery aisle, and Quangaroos was discontinued in 1976.

Quisp didn’t live long and prosper, despite having a space-age mascot. The cereal was discontinued in 1979 because of weak sales. It came back a few times, though. It was reintroduced in 1985, in the 1990s and in 2001. That year it was offered as an internet-only cereal, or, as the marketing said, it was “the first internet cereal.” In addition to being sold online, animated shorts were offered online as well. Customers could find website addresses on the cereal boxes that allowed them to watch animated adventures of Quisp and a new friend, Quunchy.

Quisp can still be found in stores every once in a while. Quaker distributes the cereal in what in calls “guerilla displays,” offering it at particular stores until it sells out. In can also be found occasionally at big-box and discount stores like Dollar General, SuperTarget and Food Lion. Quaker also sells it directly to consumers online.

Quaker Oats, the company behind Quisp, was founded in 1901, when four oat mills combined into one large company. In 1908, Quaker became the first cereal manufacturer to offer freebies with purchase, a technique the company continued with much success with Quisp. The first deal, available on the oatmeal cannister, gave customers the opportunity to send $1 and a cutout picture of the “Quaker Man,” for a double boiler to make perfect oatmeal at home.

Even before offering products and trinkets as rewards for being a Quaker customer, the company offered a coupon deal for what would become known as “oatmeal lots.” In 1902, Quaker’s oatmeal boxes came with a coupon redeemable for a deed to a small plot of land in Milford, Connecticut. The lots tended to be small – 10 by 10 was a common size, and they were carved out of a subdivision called “Liberty Park.”

The idea was that a customer might put a few lots together and hire the subdivision’s developer to build a home. That didn’t pan out for the developer or the “oatmeal lot” owners, or the tax collectors, who had a hard time tracking down all of the owners. In the mid-1970s, the town of Milford put all the deeds into foreclosure and condemned any property on the land. What stands there now? Not a cereal company. Nope, no Quisp cereal to be found. The land is home to a BiC Corporation plant, where BiC products like lighters, razors and pens are made.

The “oatmeal lot” campaign wasn’t the last time Quaker Oats used the land giveaway marketing technique. In 1955, Quaker offered customers of its Puffed Wheat and Puffed Rice cereal boxes genuine deeds to land in the Klondike. By the time Quisp was being made, giveaways were decidedly less grand, with items such as Quisp piggy banks, dolls and Frisbees being offered.

In August 2001, Pepsi bought Quaker Oats, including the Quisp cereal brand, for $14 billion. By then Quaker had acquired its own list of companies and brands, including the Gatorade line of sports and soft drinks. The purchase made PepsiCo the fourth-largest consumer product companies in the world.

Abandoned Mascot: Quake and Simon (the orange guy) are sent packing when their cereals lose in competitions with Quisp.

Cereal-Induced Superpowers: Eating Quisp gives you “quazy energy,” while Quake grants you “earthquake power.” On the other hand, poor old Orange Quangaroos got you nothing.

Exported character: Quisp takes heavy inspiration from Gidney and Cloyd, the Moon Men from “Rocky and Bullwinkle.” He has a similar body design, “hair sprouts” and carries a scrooch gun, their trademark weapon.

Shared Universe: Quisp and Quake also appeared in commercials for Cap’n Crunch. In those, the captain would often perform as the mediator between the rivals. 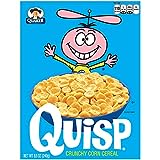 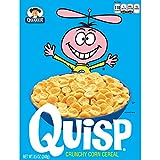