Ice cream treats are some of the most enjoyable snacks that you can buy. For people who love ice cream, what could be better than adding some toppings or a chocolate layer to make the ice cream even better. If you have ever wanted to enjoy a really simple but delicious ice cream bar, this is the one to try!

The Klondike Bar is one of the most classic ice cream treats out there, and many people think of all other ice cream treats in comparison to this iconic product. It would be unusual to have never been able to try this yummy ice cream confection, but if you haven’t done so before, you really need to go buy one to see what the hype is all about!

This ice cream bar is made by the Good Humor- Breyers company, and it is a simple square of vanilla ice cream that is dipped in a thin layer of chocolate. The original creator of the product was the Isaly Dairy Company from Mansfield, Ohio.

They sold this product in their chain of restaurants but did not offer it for sale in stores or other locations due to the complications related to keeping the treats cold in the era before refrigeration was common in homes and businesses. The original ice cream bar was first sold in 1920, and it was named for the Klondike River, which is the Yukon in Canada. The product’s rights were sold to Good Humor- Breyers, which is a division of Unilever.

The Isaly Company made these ice cream products by slicing up their homemade ice cream and dipping it into pans of Swiss Milk Chocolate. The products were sold in restaurants and also in all of the 300 dairy stores that the Isaly family-owned.

Up until the 70s, the products were not sold outside of Pennsylvania and Ohio. Florida was the first state to get the products in the late 70s as well as New York and the rest of New England. The famous tagline, “What would you do for a Klondike Bar?” followed the bars as they moved into distribution throughout the US.

The original product flavors were not just vanilla or other standard ice cream flavors. The Isaly family also made these treats in chocolate, strawberry, cherry, maple, and grape. When distribution expanded, these alternate flavors were overtaken by the vanilla in popularity and were not continued. The original product was packaged with a stick, but this design was quickly done away with in favor of the bar as it is still sold today.

One of the earliest advertising ploys for the bars when they were being sold in Isaly’s stores, was selling some of the ice cream bars with pink centers. This allowed you to get a free ice cream bar. Many workers at the dairy said that they would chip off part of the chocolate on the bars to find the ones with pink centers to give to pretty girls who came into the shop.

The chocolate was also said to be thicker on the products at this time, but later the weight would be reduced along with the product size by cutting back on the amount of chocolate on the ice cream bars.

The first ads for this product were released in 1922 in the Youngstown Vindicator. This was an unusual thing to advertise at the time since most people would not have had access to a shop that could keep something like an ice cream treat cold.

It was still not common to have access to refrigeration in stores and certainly not in homes. Ice cream confections were not commonly sold at this time due to the difficulty in keeping these products in any condition to be enjoyed by customers. The same problem plagued chocolate, so the Klondike Bar was a pretty big deal for its time.

This was a unique ice cream confection due to its lack of stick, and this is still a fairly uncommon feature of this candy bar when compared to other products on the market. This does make it a little harder to eat this confection, but the taste is worth the struggles that can sometimes happen due to the lack of handle for this ice cream snack.

The Klondike Bar was sold to Henry Clarke in 1976, who took the product out of the restaurant environment and sold it throughout the US for the first time. This was the 1980s, and ice cream bars and treats were really popular. The sales of this ice cream product increased to over $800,000 annually under Clarke’s guidance.

Being able to sell this product in grocery stores rocketed it to the top of the ice cream bar favorites list, and it was hard for the company to keep products in stock in stores during the first years that Klondike Bars were sold outside of restaurants.

In the mid-’80s, the US 11th Circuit Court of Appeals stopped Kraft Foods from using the wrapper that the bar had been sold with for years. This wrapper bar was too similar to Kraft’s Polar B’ar brand ice cream bars. Kraft tried to appeal, and the Supreme Court refused to hear the case again. By the late 1980s, Kraft settled the dispute with the former Isaly company for a hefty sum of money.

The characteristic Polar Bear still graces the wrappers of the Klondike Bar, and the simple design of the product as well as its branding, have not changed materially since the 1920s. Being able to defend their branding against the efforts of Kraft to take over the design for their own use was important. The Klondike Bar is intimately connected with its wrapper, and the loss of one of its main branding icons would have been very hard to recover from.

Canada did not get to enjoy Klondike Bars until the late 1990s, which is ironic given the name of the ice cream treat. The bars are also sold in the Greater Caribbean today. Canada and the US markets account for most of the sales of the Klondike products and since it can be hard to export ice cream over long distances, these will likely continue to be the markets that the bars are sold in with the most success. Considering how popular the Klondike Bar is today, this is no hardship for the company. 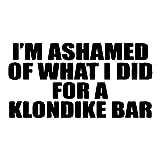 I’M ASHAMED OF WHAT I DID FOR A KLONDIKE BAR VINYL STICKER
$6.99
Buy on Amazon
Bestseller No. 2

There are various flavors of this ice cream bar sold today. Not every location or store will have all of them on offer, however. There might be some variability in the versions that are offered in Canada as well as in different parts of the US.

There are many people who will tell you that the original bar is still the best one, but the other alternate flavors do quite well when they are sold alongside the originals, so this probably comes down to personal preference.

From the HEB Sales entry:

“What Would You Do For A Klondike Bar?”, Slogan and Wrappers

The famous, “What would you do for a Klondike Bar?” tagline was added to the marketing for this product in the early 80s. The sing-song version of this tagline is always delivered at least once in ads, and it has become almost as memorable as the bars themselves. The wrappers that are placed around each of the Klondike Bars have not changed much since the first days that the company was making them for sale to other states.

Almost all of the bars and other products that are made with the Klondike Bar branding use the same silver background with a simple blue, notched circle bearing a polar bear on it. The lettering is thick block letters and is depicted in white for most products.

The design for the brand is so simple but very memorable, and it certainly stands out among the more complex and colorful ice cream packaging that is usually sold with. The ice cream marketing style that most companies employ is all about color and loud lettering, but Klondike has stuck to the same simple yet effective branding that has worked for the product for years.

A lot of the Klondike ads use the slogan, “What would you do for a Klondike Bar?” and then show the people in the ads doing silly things in order to get one. This might be something like playing patty cake if you are a bodybuilder, or getting waxed just to have the privilege of enjoying a Klondike Bar.

The ads have been some of the most famous ever for any kind of confectionery item, and almost anyone that you ask about the slogan for these products could tell you the jingle right away. Kids and adults alike love this ice cream treat, and the ads that the company has made over the years have been targeted at both age groups.

How many calories is a Klondike Bar?

There are 296 Calories in one 98g Klondike Bar.

What is a Klondike Bar?

The Klondike Original is an ice cream bar with a huge hunk of creamy vanilla ice cream covered in a thick, chocolatey shell.