PEZ is a candy that comes in the form of small bricks. PEZ is sold in colorful aluminum packages, each containing multiple small “brick-shaped” PEZ candies. PEZ is often eaten from toy candy dispensers that can take many forms. These toy candy dispensers will release or stick out a piece of PEZ candy, one at a time, making eating PEZ a novel experience that has helped propel this candy to popularity.

PEZ candy dispensers have become somewhat of a sensation and with many versions of the existing, including cross-branded figures such as Star Wars PEZ candy dispensers. The packages that contain PEZ candies will often hold several flavors inside one package, each piece of candy tightly bound next to each other in the foil package. Some packages contain one flavor or special edition flavors. You can read below for more information about PEZ, including flavors, history, and information on buying PEZ.

PEZ is a compressed peppermint candy launched in Austria in 1927 and brought to the U.S. in 1952. The candy was initially available in small drops and sold in tins before the hard-pressed brick shape candy was invented and PEZ dispensers followed in 1948 that hold 12 candy pieces. In 2015, about three billion PEZ bricks were consumed in the U.S. each year, more than two dozen flavors are available and over 1,500 PEZ dispensers have been created and are collected by fans called PEZheads.

Eduard Haas from Vienna, Austria invented PEZ and named it as an abbreviation of the German word PfeffErminZ for peppermint. Haas marketed PEZ as an alternative to smoking and used the slogan, “No smoking, PEZing Allowed.” In 1935 a PEZ factory was built in Czechoslovakia and in 1948 a small mechanical box for dispensing the tablets was invented by Oscar Uxa for the Haas Manufacturing Corporation of Vienna. The first PEZ mint dispensers, known as “regulars,” were similar in shape to a cigarette lighter.

It wasn’t until 1952 that PEZ made it to the United States, setting up headquarters in New York City. Curtis Allina, the first PEZ president in the U.S. found PEZ difficult to sell with the strong peppermint taste and in an attempt to create a product children would like to come up with the idea of creating fruit flavors and character-themed dispensers. Lemon, orange, cherry, strawberry, and raspberry were the first fruit flavors offered. The first dispensers were Santa Claus, a robot and a space gun, with Santa the most popular.

There are a number of other flavors currently available, including cola, mango and chocolate, along with sour watermelon, green apple, blue raspberry and pineapple. Over 1,500 PEZ dispensers have been created since the 1950s. In 1957 a three-dimensional character head to the top of the dispenser was added and a Halloween witch was the first character added, with Popeye the first licensed character in 1958.

The company initially had a general rule against creating likenesses of real people on PEZ dispensers but in 1976 Betsy Ross, Paul Revere and Daniel Boone were placed on Bicentennial Commemorative PEZ dispensers and several U.S. presidents have been featured. Star War PEZ dispensers have been among the most popular collectibles since they were introduced in the 1990s. In 2007, Elvis Pressley dispensers were offered and in 2008 the first Star Wars dispensers were released.

The Tweety Bird model is especially famous, thanks to its use in an episode of Seinfeld when Jerry puts it on Elaine’s lap, which causes her to laugh uncontrollably. PEZ dispenser collecting grew in popularity in the early 1990s and the first-ever PEZ collectors convention was held in Mentor, Ohio in 1991. Collectors from the U.S., Canada, Europe, and Japan made PEZ an international phenomenon.

Collectors conventions are held around the world and the 22nd annual Northeast PEZ Collectors Convention is scheduled for April 29-May 2, 2020 in Stamford, CT. Most of the PEZ distributed today comes from a factory in Orange, CT, which was built in 1973 that produces 12 million tablets of PEZ every day and uses 50,000 pounds of sugar every 4 days. Together with the location in Traun, Austria it produces 70 million dispensers and five billion candies per year.

In 2011, the company opened a PEZ visitor center at its CT headquarters that features the most comprehensive collection of PEZ memorabilia in the world. Some Pez dispensers can sell for large amounts as collectibles. It has been alleged that the highest verifiable sale of a Pez dispenser was a private sale of a Mickey Mouse dispenser at $7,000, But we could not confirm that.

Among the most valuable Pez dispensers are two Political Donkeys, each valued at over $13,000, one of which was owned by JFK. A political Democratic donkey dispenser and a Republican elephant PEZ dispenser were released; These two PEZ dispensers had estimated combined value of $20,000 to $25,000. The making of a PEZ animated film was announced in 2015 with a possible release date of 2018, but no mention of the film has been made since 2015.

The Year PEZ Was Invented

PEZ was invented in 1927 and was invented in Austria. PEZ was first sold in the U.S. in 1952. The decade of the 1920s is known as the “Roaring Twenties” and the “Jazz Age” in the United States. This period is also referred to as the “Golden Twenties” because, at this time, the economy was booming.

In France, people remember the decade as the “Crazy Years”. They consider that the decade was an era of artistic and cultural dynamism. Therefore, it seems like the decade was successful and remembered positively by people all around the world. No wonder the confectionery industry and manufacturing processes were also well developed.

Back in time, candy was kind of a luxury item and was not as common as it is today. The confectionery industry was specially developed in Europe because of World War I. During the war, the troops were given candy bars for energy. This soon became a habit, and even after the war, the demand for the sweet treats was high.

Hershey Corporation was, back in time, one of the largest candy manufacturers. When other companies found out about the demand, they started to make sweet treats too. As a result, many new candy brands appeared on the market.

The candy bar boom started and everybody was trying to create something that would make the customers happy and pleased. The filling that was mostly used included dried fruits and marshmallows. Because of the issues with the refrigeration, mainly the manufacturers’ focus was on local markets.

PEZ candy was one of the great choices at this time because it did not require refrigeration and was something new, not a typical sweet treat that people were used to. It was refreshing and, therefore, soon became popular. Some of the most famous candies of the 1920s were Oh Henry, Baby Ruth Candy Bar, Haribo Gold-Bears, Double Bubble Bubble Gum, Reese’s Peanut Butter Cup, and others.

The Person Who Invented PEZ Candy

PEZ was invented by Eduard Haas, an Austrian businessman from Vienna. As an adolescent, Haas patented a light baking powder mixture for Gugelhupf cakes. He developed this product according to the recipe that was left by his grandfather. His “Hasin” powder was sold to high-income families in Austria and Hungary.

He was born into an Austria-Hungarian family, located in Leoding, near Linz. His family had pretty good fortune. Eduard’s grandfather was a doctor, and his father had a grocery store.

Eduard Haas started to purchase peppermint oil from the chemists and used it in his experiments on candy making. As a result of various tries, in 1927, he created a tiny and flat candy that had a mint flavor and he named it PEZ.

The candy was considered to be an anti-smoking mint, and therefore, this became one of the reasons for its popularity. In 1935, the company’s factory was built in Czechoslovakia. The aim was to produce treats on a larger scale.

Even though PEZ candy was popular, it was not enough for Haaz, and he started to broaden the manufacturing process and new product line. By the year of 1948, the compressed sugar tablets were sold in tins that had a small size. It was so until 1949, when the dispenser was invented and introduced at the Vienna Trade Fair.

The first dispenser had space for the same number of numbers as it has today – 12. After World War II, Haas worked on the inventions with his colleagues and mastered dispensers that had the shape of lighters. This famous dispenser became the packaging for the PEZ candy since then.

Eduard Haas moved his manufacturing to New York City in 1952 and changed his marketing campaign. This time, instead of the adults (who have quit smoking), he started to aim the promotions at children. Some very interesting figures were printed on the dispensers, such as “flaps” and colored mints. Since their appearance, PEZ dispensers have become collectible items, and people have started to gather them as a collection.

The Company That Makes PEZ Candy

Between those locations, two of them are distributing more than 70 million dispensers every year, for a total of 5 billion candies. PEZ candy products are available in more than 80 countries all around the world.
The brand entered the United States in 1952. In 1973, the first candy-making facility in the USA was located in Orange, Ct. The corporation opened the PEZ visitor center in 2011, where visitors have an opportunity to check out the brand’s history and development.

The famous and memorable name of the PEZ candy comes from the German word referring to peppermint. “Pfefferminz” has been shortened and, as a result, “PEZ” was created.

The PEZ logo is indeed one of the most famous candy logos in the world. It’s completely blue and white. The outline and shades of the letters are done in blue, and the filling is white. The letters are in uppercase and the spelling itself is to recall the trademarked style of the candy. The style that is used on the dispensers and packaging is carried on the logo.

The color blue symbolizes loyalty, trust, responsibility, and honesty, whereas the white color is a representation of simplicity, purity, and innocence. The colors tell customers that they can trust the brand, and that the brand is responsible for its products and deserves loyalty. 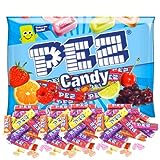 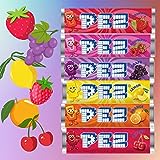 Here are the ingredients of PEZ Candy.

PEZ candy is one of the most remembered candies and has been around since the 1920s. Its strong peppermint taste and recent additions of fruity flavors make everybody love it. Even though at first it was thought to be an alternative to smoking, today it has become the favorite treat of children.

This novelty candy and its dispenser collectors are truly one of the reasons for its popularity among children. It has become not only a favorite sweet treat but also a toy. PEZ candy has become a significant part of pop culture and has remained the same for decades.