While many mistakes the bar as having been named after the baseball player, Babe Ruth, its original manufacturer claimed that the name was actually inspired by the daughter of President Grover Cleveland. The business has since been sold twice and is now manufactured by the Ferrara Candy Company. Its success has spurned several related products including miniatures and ice creams. It has become a staple of the American confectionary world and is often used in popular culture.

For many years the Kandy Kake bar was a bestseller for the Chicago-based Curtiss Candy Company, having initially been included in the company’s five-cent category. In fact, it was regarded as a staple of their business but having spent much of the early 1920s struggling to make ends meet, founder Otto Schnering needed to do something differently.

He decided to reformulate and rebrand the company Kandy Kake bar, starting with the recipe itself. While the Kandy Kake had a ‘pudding center’ with peanuts and caramel, the new bar was to be chocolate with nougat. The only ingredients to stay are the peanuts and Carmel. A new recipe called for a new name and the Baby Ruth Bar was born and it was to become the Curtiss Candy Company’s best seller for over six decades.

To launch the new bar, Otto Schnering undertook a series of unique marketing tactics including dropping a number of the bars, with a parachute attached, over the city of Pittsburgh. Due to the media attention this garnered, it was repeated across the United States.

In 1981, Curtiss was purchased by Nabisco but their tenure didn’t last long and in 1990 the Curtiss brands were sold to Nestle. The Baby Ruth Bar was to move one final time before finding its final home, as in 2018 the Forrero folded all acquired brands into the Ferrara Candy Company.

In 1921, the Kandy Kake bar become the Baby Ruth Bar and while the Chicago-based company protested the similarity, much speculation has been cast on where the name came from. At the time of its rebrand, baseball player Babe Ruth’s fame was on the rise, and some speculated that it was too much of a coincidence.

The Curtiss Company alleged that the bar was actually named after Ruth Cleveland, the daughter of President Grover Cleveland. Yet the timing of the change seemed pretty suspicious. Many assumed that the failing candy company was seeking an opportunity to cash on Babe Ruth’s rise to fame, with the new name being undoubtedly similar.

Despite the company’s assurance otherwise, some sections of the public viewed it as a devious move by the Curtiss Candy Company, as the alternative story and minor difference in name allowed them to avoid paying royalties.

There was one key issue with this story. Although Ruth Cleveland had been nicknamed Baby Ruth, she had been born exactly three decades earlier and by the time the bar was made she had sadly died from diphtheria. While her chocolate namesake was a household name, Baby Ruth had long since been forgotten.

Five years after the name change, in 1926, Babe Ruth decided to enter the candy business and licensed his name to the George H. Ruth Candy Company. They attempted to register their own version of a Ruth-inspired chocolate bar, Ruth’s Home Run Candy.

The wrapper included a picture of the baseball player in his uniform, with the assertion that it was ‘his own candy’. The Curtiss Candy Company sued George H. Ruth Candy Company for copyright infringement. They alleged that while their bar wasn’t named after Babe Ruth, the similarity between the two bars was an infringement.

While the public was still skeptical over the story, the Government bought it and in 1931 the court ruled in favor of the Curtiss Candy Company. They argued that the ballplayer was trying to cash in on the similarity between the name of the bar and his own name.

As if mocking their denial of the link between the player and the chocolate bar, the Curtiss Company used the controversy as part of its marketing plans. After Babe Ruth’s famous ‘called shot’ at Wrigley field, the Curtiss company installed an illuminated advertisement for the Baby Ruth bar. The sign stood right opposite the flats on Sheffield Avenue, near where Ruth’s home run ball had landed.

Ironically, the Baby Ruth Bar has maintained a good relationship with the sport and has been closely linked to baseball ever since. In 2006, the Baby Ruth Bar become the ‘official candy bar of major league baseball’ under a three-year contract. Interestingly, numerous surveys have found a link between those likely to eat a Baby Ruth and those who enjoy baseball.

The Baby Ruth Bar has been referenced and included in many aspects of American Pop Culture, including several movie scenes.

There was even a popular song made in 1956 named ‘a Rose and a Baby Ruth’. It was written by John D. Loudermilk and was recorded by George Hamilton IV.

Unsurprisingly, the 20s candy was also referenced in one of the later episodes of Friends, at the point in the timeline when Rachel is pregnant with Ross’ baby. While brainstorming baby names, Ross suggests Ruth. At that point, Rachel replies excitedly, ‘Yes! We’re having a little baby Ruth.’

The Company That Makes The Baby Ruth Bar

Since 2018, the Baby Ruth Bar has been made by the Ferrara Candy Company, an American candy company based in Illinois. The company was founded in 2012, with the merger of Ferrara Pan Candy Company and the Minnesota-based Farleys & Sathers Candy Company. The brand boosts ownership of some of America’s most well-known brands including Laffy Taffy, Nips Candy, Nerds and Twizzlers. 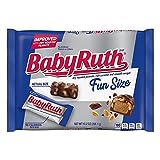 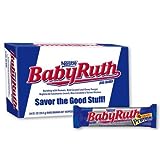 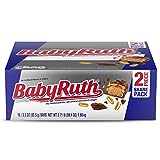 You can also buy Baby Ruth at Old Time Candy by clicking the image below.

The Baby Ruth Bar is marketed across all platforms and uses various marketing styles. While this has included traditional and social media, the brand is now a household name and, in many ways, it sells itself.

The packaging of the Baby Ruth Bar is as iconic as the product itself and is cased in a silver and blue sleeve. Printed with peanut graphics and the famous red logo, the Baby Ruth Bar’s packaging is one that most Americans would be able to pick out of a line-up.

In 2020, the Baby Ruth Bar won Product of the Year in the Candy Bar category with over 40,000 American’s having voted for it. It’s believed that a recent change in packaging was part of the reason for this, as well as the fact that it’s a much-loved confectionery product. They had recently changed the lamination which was used, opting now for an adhesive lamination. This change makes the packaging softer but maintains the same kind of protection and allows for good shelf life. Its softer design now makes it easier for customers to open.

Here are the Ingredients for Baby Ruth Bar.

This information is or a 2.1oz serving of the Baby Ruth bar (full size) – check the label of the product for accuracy.