Nerds have been a popular candy for decades. They are a fun little candy that you can just pop a handful in your mouth or mix and match flavors however you like. Sometimes Nerds candy can be a little sour and other times they can be very sweet.

They have added many popular flavors over the years and they continue to be a popular candy to enjoy.

Nerds are the perfect candy for people who love sour candy. The inventor of Nerds candy, David Klein, invented them in 1976 with his wife Judy Klein. They originally wanted to create a candied version of the popular breakfast cereal that was released by Kellogg’s in 1965 called “Nerds Cereal.”

After many attempts, they finally created these delicious little sugar-coated corn puffs that we know today as Nerds!

Nerds candy are a delicious sweet and sour candy that was invented in 1976. Originally, the inventor David Klein wanted to create Nerds Cereal but after many attempts, he finally created what we know today as Nerds!

Many flavors have been added over the years including “Fruit Juicy Red”, which is one of the most popular flavors on the market! They are tasty little candies…that you can pop handfuls at a time or mix and match different flavors… however, you like them best.

Nerds are no longer produced under the Willy Wonka brand but are now produced through the Ferrara Candy Company, which is part of the Ferrero Group. It’s labeled under Nestle.

Nerds are unique because they often come as a pair. While you can find them in mixed flavors, most boxes that you buy will be a duo. This means you get two flavors in one package. Of course, there are mini candy boxes that typically just have one flavor in them, denoted by the color of the packaging and the candy.

In the event you get the duo box that has two flavors, those flavors are separated in the box and kept apart so you can mix them or eat them individually. That being said, they do make larger packages that are a blend of flavors and in those cases, flavors will not be separated.

Of course, now there are a bunch of other Nerds candy alternatives too. You might find things like Nerds jelly beans, Nerds ropes, or even Nerds gumballs (a gumball with Nerds inside).

When you look at what Nerds are made of, you will find that their official recipe is obviously top secret. However, the ingredients list has the top ingredients as being dextrose, sugar, and malic acid – all of which are basically forms of sugar.

Then they have corn syrup as well, paired with a variety of artificial colors. Fun fact: all nerds are white at production and then colored to coordinate with their flavor.

When Was Nerds Invented?

Nerds candy have been around for decades. They are a sweet and sour treat that has many varieties to enjoy! The company was founded by David Klein in 1976 with his wife Judy who he worked closely with to create this delicious little sugar-coated corn puff we know as Nerds today!

In 2006, Nestle merged with a Swiss food giant called Jacobs Suchard AG who already had a number of popular candy brands including Now & Later, Trolli gummy bears, Zotz fizzy candies and more under their umbrella! They also own KIT KAT as well as other international confectionery brands such as Aero bars in Europe, Chunky Chocolate Bars in Canada and Panda Licorice in South Africa just to name a few! So today if you enjoy those tasty little sugar-coated corn puffs or delicious chewy and soft Now & Later candies…you can thank Nestle for creating these tasty treats!

As we mentioned earlier, Nerds candy were invented by David Klein and his wife Judy. Their original intention was to create a cereal but they ended up with this flavorful and fun candy instead. Little did they know in 1976 that their candy would become a huge hit in the candy industry.

Here we are at 2021 and Nerds are still very much a part of the candy industry today. While David and Judy created Nerds, it was originally distributed by Willy Wonka Company.

The original owner of Nerds was Nestle, who owned the Willy Wonka Candy line. You very well may still see the Willy Wonka labeling on these products but what has changed is that they are no longer owned by Nestle.

In 2000, Nestle actually sold the Willy Wonka line, which included Nerds. The line is now owned by Ferrara Candy Company.

These candies gained popularity beginning in the 1980s and have been popular ever since. They have run up against similar competition through the years, like Dweebs. Dweebs were a clear similar option to Nerds but they were bigger. However, Dweebs simply must not have compared because they didn’t last very long in the market.

Other than short time competitors like that, there has never really been any major competitor that has given Nerds any real threat. This is perhaps one of the reasons they continue to be popular and well-liked. It’s a simple, fun 80s candy – and it’s ALLLLL sugar!

How Did Nerds Get its Name?

According to some of the stories out there, one of the popular stories is that Nerds were named so because of a Dr. Seuss book that was called “If I Ran the Zoo”. The book mentions a nerd in reference to one of the creatures in the zoo of the story.

If you read the book, there is a popular line in there, along with many other interesting and unique names for the zoo animals. Of course, we don’t really know if there is much truth to this tale.

It is also known that David Klein and his wife were trying to create a cereal and ended up with this candy instead when the cereal just simply didn’t work out like they hoped it would all along the way.

What we do know from the name is there is no indication of any kind that the name “Nerds” is related at all to the term used to describe a “geek” in some senses. In fact, the candy had its name before this word really became a popular term for that purpose. 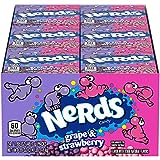 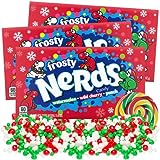 There are the classics and then there are the specialties and additional options that have come and gone along the way. You still may be able to find quite the variety of Nerds flavors and options.

Here are the classic flavors that Nerds candy has always been known to have.

Keep in mind that most of these flavors are paired in a duo so when you purchase a regular size, you are going to get strawberry and grape or some other flavor combination. What you will find is that the same flavors are usually paired together with little change or alteration.

Here are some additional options for Nerds candy that have been offered through the years.

Here are the Ingredients of Nerds Candy.

Around certain holidays, they do come out with some specialty options that are always limited availability. Near Halloween, you can always purchase large bags of mini boxes, which are a single serving and a single flavor in a box and perfect as Halloween Candy. These tend to be popular among trick or treaters because it’s a fast and easy tasty treat.

Nerds can be purchased online just as easily as they can be purchased in the store. From the major retailers that always carry candy to the various online candy shops and even Amazon, you won’t have trouble finding them.

Nerds candy also have their own official website where you can find regular nerds and some of the other varieties. The website does not allow you to purchase them directly but can point you to online retailers where you can compare or will share retailers so you can find them near you as well.