Few people in the US are unaware of the Eggo waffle. This is one of the most classic quick and easy foods that Americans have eaten for years. Between clever advertising and a really delicious product, Eggo has been a very successful frozen treat for generations. Over the years, many versions of this product were added to the lineup, and it continues to be one of the most popular breakfast foods in the US.

Eggo waffles are some of the most delicious frozen snacks that have ever been sold, and adults and children alike love them. Eggo also makes pancakes, French toast, and even breakfast sandwiches that are all sold under the Eggo brand name. For those who love breakfast foods, this is a convenient and delicious brand that offers lots of variety for your morning meal.

Eggo is owned by the Kellogg Company, and they offer a wide array of breakfast items under this brand name these days. Eggo waffles were invented by Frank Dorsa, who created the entire process by which these waffles could be cooked, then frozen, and then packaged to be sold. This had never been done before, and it was a completely unique and revolutionary idea.

The Dorsa family actually made mayonnaise first under the Eggo name, which seems like it would not lead someone to make waffles. However, Frank Dorsa was a lifelong tinkerer, and he was always looking for new things to make and sell. The various clever machines that he made to produce food products were ahead of their time. It is not really a big surprise that Dorsa was able to invent such a revolutionary product.

The Dorsa brothers also worked on Eggo potato chips and Eggo syrup at the same time as they were working on the original Eggo product. These items were produced in the factory on Eggo Way in San Jose. Eggo potato chips were actually a common item that was handed out by the Dorsa family at Halloween for years. The waffles were actually made on an automated waffle-making machine that utilized a merry-go-round design that worked well enough to mass produce the Eggo product.

The Dorsa brothers also opened an Eggo restaurant in Redondo Beach in 1968. This was not a long-lived venture since they sold the product not long after. It is interesting to contemplate what it would have been like if this product had continued to be sold in restaurant locations fresh rather than frozen.

The original name of the product was actually not Eggo. The Dorsa brothers originally called them “Froffles,” which was a play on the fact that they were frozen waffles. People taste-testing the waffles said they tasted like eggs, so the Dorsas changed their name to Eggos. The Dorsa brothers said that the customer was always right and relinquished the name that was a play on words for the slightly less traditional name Eggo.

Kellogg bought the Eggo products from the Dorsa family in 1968. They wanted to diversify their products and move into a new market. The catchy slogan that is still used today, “L’eggo my Eggo”, was born when this sale took place. The television commercials that were paired with Kellogg’s acquisition of the Eggo product were catchy and were such an instant hit that they cemented the product’s success.

People were eating frozen dinners by this time, but frozen breakfast was a new idea. The concept of a waffle that you could simply warm up and enjoy right away was very exciting to kids who were tired of begging their mothers to get up early and make them waffles each morning. This was the driving force behind adding items like French toast and pancakes to the product lineup as well.

Eggo waffles might also have been such a success heading into the 70s because an increasing number of women were leaving the home to work each day as well. The stay-at-home mother was becoming a thing of the past, and kids were often required to figure out their own breakfast before they went to school each day. The companion rise in popularity of the breakfast cereal at the same time is likely also related to this change in gender roles and family roles.

Frozen breakfast items are actually far more popular today than frozen dinners, and many people still think of frozen breakfast as relatively healthy. This is not always the case with other sweets and treats that are made for breakfast consumption, but the Eggo waffle product is likely much healthier than many of the other items that are out there to enjoy in the morning before school or work. Pop Tarts and various sugary cereals come to mind when thinking of unhealthy breakfast items that are nevertheless very enjoyable.

Today, Eggo offers a wide array of fun ways to prepare your Eggos and even has recipes on their site that help you to make Eggos even more fun than they are without added effort. This includes things like Eggo Fish which are made with fruit. The pancakes even have their own recipes like Pancake Balloons. This is usually just adding toppings to the waffle or pancake product, but there are some fun ideas to make your waffles look cuter and more appealing if you want.

Some of these items have been sold with unique branding related to movies or with particular attention toward kids. There have been Disney-themed waffles sold under the Eggo branding that were shaped like Micky Mouse, and there have been limited-time special shapes for different holidays on offer from time to time.

Eggos have been linked with popular culture from nearly the beginning of their life. The famous L’eggo my Eggo tagline was uttered by Jason Hervey, who was later to return to TV in the Wonder Years and Diff’rent Strokes. Netflix’s original series Stranger Things also uses Eggos as a major plot point during many parts of the story.

The use of Eggos in Stranger Things made people in other countries aware of this food item and launched an increased interest in them. This is not a product that can be sourced to every country since it is a frozen food item, but sales also ticked up significantly in the US after Stranger Things brought so much attention to the breakfast item. This is probably part of why Eggo won the Lausanne Index prize for the best product of the year in 2020.

Eggos also made the news when there was a shortage of Eggo products in 2009. This was related to some issues with major production locations and repairs at some other plants at the same time. The interest in these products is clear since the shortage immediately made headlines and continued to be a concern until the supply bottleneck was sorted out.

Lots of people point to millennials being increasingly aware of the dangers of ingesting lots of sugar every day for the death of some of the most popular breakfast cereals from the 60s and 70s, but the Eggo waffle product continues to be popular despite this change in breakfast food preferences. Eggos might have to work harder to make Cornflakes relevant these days due to the change of consciousness about diet and sugars, but they are not having any trouble with Eggos losing their popularity. 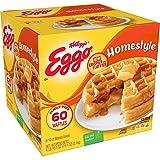 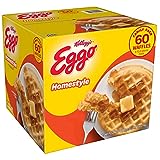 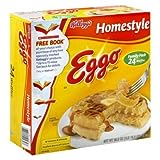 From the Kellogg’s website entry for the Homestyle Waffle product:

Forever famous for the L’eggo my Eggo slogan, nearly all the ads for this product include this tagline. You would be hard-pressed to find an Eggo waffle ad without this slogan in it these days. And it is so catchy, it’s really no wonder that this slogan has continued to be so popular and perform so well for the brand. These classic and more recent ads will show you the themes for this product in advertising have not changed much over the years.

How many calories in Eggo waffles?

How many carbs in Eggo waffles?